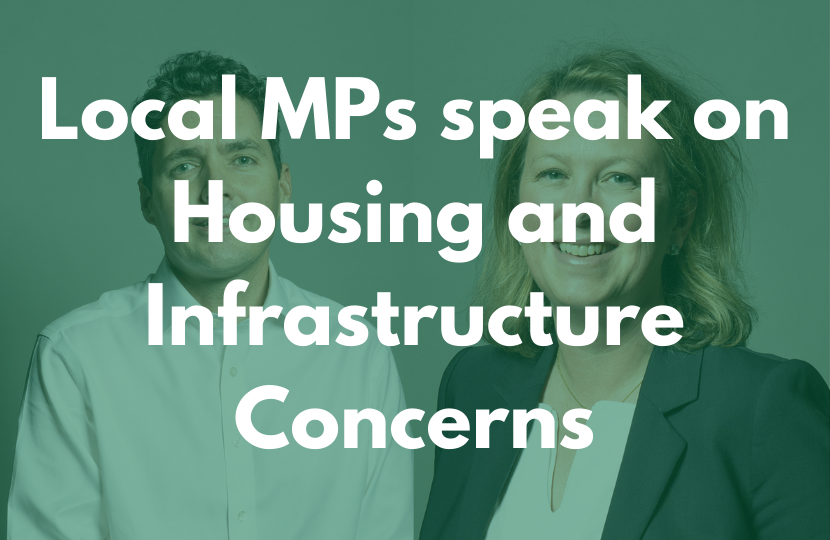 Hastings and Rye MP, Sally Ann-Hart, and Bexhill and Battle MP, Huw Merriman, have spoken in Parliament about their concerns for the future of housing development in the area. The MPs have called for planning laws to be changed in order for it to be made easier to build on land set aside for development and for rules to be tightened to make it harder to develop on land outside of these designated zones. The MPs also called for the Government to invest in infrastructure in the South East in addition to parts of the North and the Midlands.

The MPs’ calls came after the Government signalled its intent to ask Parliament to pass new laws “to help more people to own their own home” and to “modernise the planning system, so that more homes can be built”.  The changes could see local authorities designate ‘growth areas’ for development which would not require planning consent to develop. The MPs are calling for land on the Bexhill to Hastings Link Road to be built out at a faster rate to deliver new affordable homes for local residents. They have spoken of the need to make it more difficult to build on less suitable land to protect local green spaces and to encourage faster development on sites which have been already designated and approved for housing.

Speaking in the chamber, Sally-Ann Hart said “I would like to take a stand for parts of the South East, like Hastings and Rye, which must not be overlooked when it comes to levelling up. Yes, it is absolutely right that those neglected parts of our country…are given the opportunities and investment but we cannot overlook parts in the South East which are also in desperate need of investment in education and skills, transport infrastructure, connectivity and job opportunities.”

Taking part in the same debate, Huw Merriman said “For so many young people, getting on the housing ladder is not something they aspire to; they think that generations before them had that opportunity and it will not be there for them. To me, that is a tragedy. But with the housing must come the infrastructure, so that not just those moving to the area but those already in it have all the schools, the medical facilities and the roads that they require.”

Comparing money spent per person per year and population growth in England as a whole, Huw Merriman added “It is notable that there has been a 19% increase in the population of the South East, whereas in the corresponding period the population of the North West has dropped by 6%, yet the spending per head on transport is exactly the same in both regions, at £370. That is evidence that there has been more house building in the South East, but there has not been the spend on infrastructure.”

The MPs have also called for all local authorities to have an updated local development plan in place. Currently, none of the local authorities in East Sussex have an up to date Local Plan. The MPs added “If a local authority has a Local Plan in place then the presumption is that development can only occur where designated. We are keen to see Local Plans completed so we don’t see developers getting approval for land which is wholly unsuitable and not where the planning teams, or community, expect it to be. There is a lot of pressure on local planning departments to deliver; we are keen to ensure that they have the support needed to provide the new homes which people need in the right areas for the community.”

The MPs have committed to driving forward bids for road, rail and infrastructure. This week they have held meetings with Highways England and Network Rail in order to lobby Government for the investment needed to reduce train journey times from the county to Ashford and London St Pancras and to make improvements to the A21.

Thank you for contacting me about the government’s recent White Paper on the reform of the current planning system – Planning for the Future.  With 80% of the constituency being designated an Area of Outstanding Natural Beauty, and with proposed targets increasing the numbers for Rother (and Weal