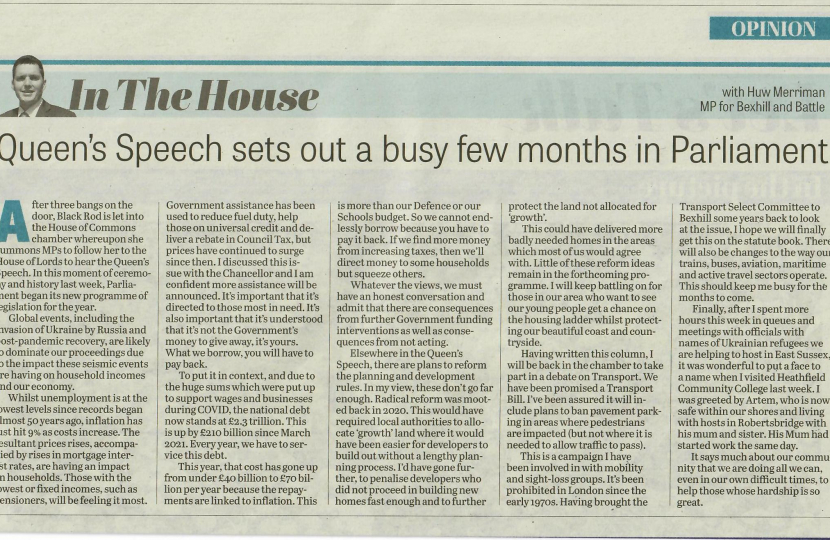 Global events, including the invasion of Ukraine by Russia and post-pandemic recovery, are likely to dominate our proceedings due to the impact these seismic events are having on household incomes and our economy. Whilst unemployment is at the lowest levels since records began almost 50 years ago, inflation has just hit 9% as costs increase. The resultant prices rises, accompanied by rises in mortgage interest rates, are having an impact on households. Those with the lowest or fixed incomes, such as pensioners, will be feeling it most. Government assistance has been used to reduce fuel duty, help those on universal credit and deliver a rebate in Council Tax, but prices have continued to surge since then.

I discussed this issue with the Chancellor and I am confident more assistance will be announced. It’s important that it’s directed to those most in need. It’s also important that it’s understood that it’s not the Government’s money to give away, it’s yours. What we borrow, you will have to pay back. To put it in context, and due to the huge sums which were put up to support wages and businesses during COVID, the national debt now stands at £2.3 trillion. This is up by £210 billion since March 2021. Every year, we have to service this debt. This year, that cost has gone up from under £40 billion to £70 billion per year because the repayments are linked to inflation. This is more than our Defence or our Schools budget. So we cannot endlessly borrow because you have to pay it back. If we find more money from increasing taxes, then we’ll direct money to some households but squeeze others. Whatever the views, we must have an honest conversation and admit that there are consequences from further Government funding interventions as well as consequences from not acting.

Elsewhere in the Queen’s Speech, there are plans to reform the planning and development rules. In my view, these don’t go far enough. Radical reform was mooted back in 2020. This would have required local authorities to allocate ‘growth’ land where it would have been easier for developers to build out without a lengthy planning process. I’d have gone further, to penalise developers who did not proceed in building new homes fast enough and to further protect the land not allocated for ‘growth’. This could have delivered more badly needed homes in the areas which most of us would agree with. Little of these reform ideas remain in the forthcoming programme. I will keep battling on for those in our area who want to see our young people get a chance on the housing ladder whilst protecting our beautiful coast and countryside.

Having written this column, I will be back in the chamber to take part in a debate on Transport. We have been promised a Transport Bill. I’ve been assured it will include plans to ban pavement parking in areas where pedestrians are impacted (but not where it is needed to allow traffic to pass). This is a campaign I have been involved in with mobility and sight-loss groups. It’s been prohibited in London since the early 1970s. Having brought the Transport Select Committee to Bexhill some years back to look at the issue, I hope we will finally get this on the statute book. There will also be changes to the way our trains, buses, aviation, maritime and active travel sectors operate. This should keep me busy for the months to come.

Finally, after I spent more hours this week in queues and meetings with officials with names of Ukrainian refugees we are helping to host in East Sussex, it was wonderful to put a face to a name when I visited Heathfield Community College last week. I was greeted by Artem, who is now safe within our shores and living with hosts in Robertsbridge with his mum and sister. His Mum had started work the same day. It says much about our community that we are doing all we can, even in our own difficult times, to help those whose hardship is so great.