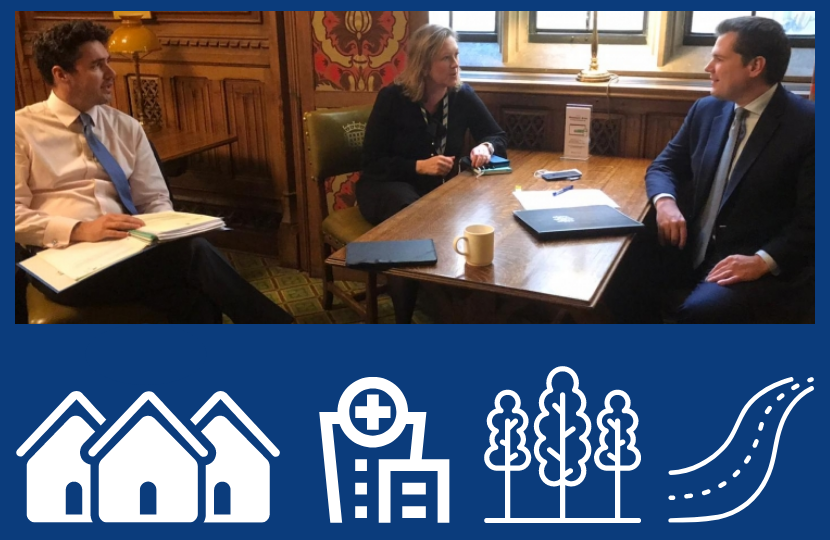 Thank you for contacting me about the government’s recent White Paper on the reform of the current planning system – Planning for the Future.  With 80% of the constituency being designated an Area of Outstanding Natural Beauty, and with proposed targets increasing the numbers for Rother (and Wealden already having high numbers), this is a matter which has exercised me and I wanted you to be aware of what I have been doing.

With my neighbour, Sally-Ann Hart (who shares Rother District with me), I wrote to the Housing Minister to outline our local challenges and concerns with the changes to the way planning decisions could be made and the ability locally to meet new targets. You can read this letter at the bottom of the page.

Please do read the letter because it will give you an idea of the concerns I hold and the challenges we face. The letter expressed a desire to better understand how the model and algorithm could increase the numbers for Rother to 1100 homes per annum. As I have found with working on the school funding formula, the best starting point is to sit down and understand the model before starting to challenge it. We therefore asked for a meeting with the officials with this understanding in order to then take the case forward.

Meeting with Secretary of State

As a precursor to the meeting with officials around the model, Sally-Ann and I sat down with Robert Jenrick, the Secretary of State for Housing, Communities and Local Government, to discuss the concerns raised in the letter. I am shortening his title to SoS in order to shorten this communication. SoS conceded that Rother’s numbers are high compared to other districts and boroughs across the region. SoS maintained that, at 300 per year, Rother have not been delivering enough homes but himself ventured the view that there was a challenge for Rother given so much of the geography is AONB. SoS explained that the figure of 1100 is largely derived from the high price of property vs the low average wage; the aim is to build more homes to reduce the price in order to give local people the opportunity to own their own affordable home. We do know that homes are too expensive for many in Rother because the constituency is in the Top 10 (out of 650 constituencies) with the highest proportion of people on the living wage. Given many choose to retire to the area, or move to commute to London, the house prices are out of reach, and not reflective, of those who work locally.

We explained the position to the Secretary of State as follows:

From a Wealden perspective, I explained that the District Council has had its plan rejected and this was causing more pressure to permit housing developments which appeared completely out of kilter with planned housing. I also explained that the view of the Ashdown Forest, with regard to nitrogen deposits and the Habitats Directive, was pushing development further south. This is leading to saturation around Stone Cross and huge concern for villages such as Herstmonceux and Ninfield. I did recognise that Wealden’s targets, unlike Rother’s, will reduce if these new numbers are imposed.

With regard to the changes in the planning process, as opposed to the numbers, SoS explained that the proposals would make it faster to deliver consent and build out on land, such as the Link Road, which has been allocated as land for ‘growth’. To the concern that the ‘design’ element would still need to be approved, and on hearing our example that this took 3 years for Bovis to receive post-outline approval, SoS was confident that there would be no such hold ups post-local plan because the design-stage should largely be built into the local plan. I feel that this needs to be tightened up so there is not such a lengthy delay to give final planning consent. These delays ultimately allow developers to argue that we are not building enough (hence more homes in Little Common and other areas under pressure).

We additionally raised the concern that, without further protections for land designated as ‘protected’, developers will continue to target our protected land and not deliver on the ‘growth’ land. To that concern, SoS explained that speculative applications would no longer be permitted and this would be the catalyst for change in ‘protected’ land which, along with the drive to deliver faster on ‘growth’ land, would cause house-building to be delivered on the land designated by the plan as land for development. I am looking forward to testing this with many local residents who have proved such a help at delving into the planning detail.

As a conclusion to this meeting, there seemed to be an understanding that the numbers for Rother needed further consideration. It was agreed that we would attempt to set up a local meeting on the Link Road with ourselves as MPs, Trinity College, as land owner, Bovis, as lead developer as well as our local stakeholders to attempt to drive delivery and also understand why the build-out has not occurred at the pace we had expected back in 2015. If it had, I do not believe we would have fallen behind and had these pressures to catch up with more building. SoS will arrange for Sally-Ann and I to discuss the algorithm with relevant officials. I also hope that he will join for our local meeting but I am realistic about diary pressures for Ministers at this current time of COVID-challenge.

I am aware how much concern this issue has caused because I have received a considerable amount of correspondence on this issue and I am pleased to have been copied into a number of responses to the government’s planning consultation from local parish councils, groups and organisations. Their well-considered and knowledgeable responses helped me formed the view which allowed for the conversation with the Secretary of State. Many asked me to appear at the debate on Thursday 8 October in the House of Commons chamber. I did so, and Sally-Ann was selected to speak, but demand exceeded supply of time so we did not get to Sally-Ann. Her speech is attached and you can rest assured that there are always opportunities to repeat. The most important point is that there are a large number of Conservative MPs who feel the same and the conversations behind the scenes will help to shape this policy.

I will update constituents on this matter and, if you have not done so already, my regular newsletter (which you can sign up to receive at this link) will also help.

Hastings and Rye MP, Sally Ann-Hart, and Bexhill and Battle MP, Huw Merriman, have spoken in Parliament about their concerns for the future of housing development in the area.

The decision to reverse a proposed 50% increase the number of new homes in Rother District Council has been welcomed by the MPs representing the area.