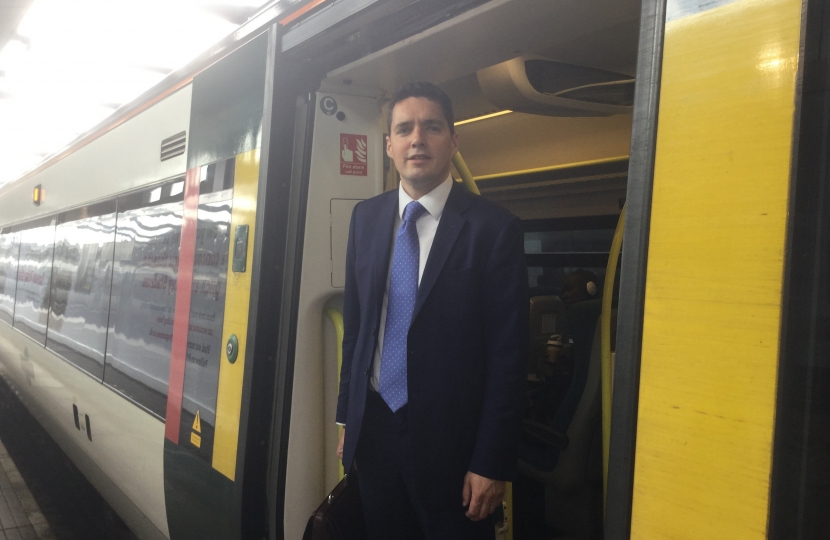 As a daily commuter to Parliament, the state of our railway personally impacts me as well so I want to assure constituents that I not only understand but I experience it too and have done so for the last ten years as a season-ticket holder.  I spend a huge amount of my Parliamentary time in rail inquiries, meeting with those with influence and responsibility, speaking up for commuters in the House of Commons chamber and in taking other action in Parliament to put pressure on those responsible to give constituents the service which they pay for. My national role on the Transport Select Committee allows me to get to the heart of this matter and challenge those responsible in public and recorded proceedings. Our committee is in the midst of five separate inquiries on rail. Constituents can be assured that, at evidence sessions with Government Ministers, Southern Rail managers and rail union leaders, I champion the cause of improved Southern Rail performance at every turn.

Local MP, Huw Merriman, has this week called on the Government and Train Operators to give a better deal to rail passengers seeking refunds for journeys cancelled by the Coronavirus outbreak.

Huw Merriman, MP for the Bexhill and Battle constituency, has welcomed the government’s announcement that 16-17 year olds will be able to get half price rail travel from this September.

Bexhill and Battle MP, Huw Merriman, has criticised the decision to increase rail fares by 2.8% from January 2020. The increased fare is calculated using the July Retail Prices Index (RPI) measure of inflation.

Shutting down Parliament is no way to deliver democracy

This week Parliament has been debating whether it should be prorogued (i.e. shut itself down) during the month of October. The thought that employees would wish to close down their own place of work would be an unusual concept to most. It is to me as well.

Transport Select Committee: Policies and Priorities of the Secretary of State for Transport

This was a one-off oral evidence with the Secretary of State for Transport, Chris Grayling MP.

I asked about the out of court settlement with Euro tunnel for no deal Brexit ferry provision and on whether that was the right decision.

The refurbishment of Battle railway station, considered to be one of the finest buildings of its type in the country, has been given the seal of approval by Huw Merriman, MP for Bexhill and Battle.

Amid news that the South-Eastern railway franchise award will be delayed, Huw spoke in Parliament of the complex, expensive and often litigious process of rail franchising.

In questions to the Transport department, Huw welcomed news that half price rail fares would be extended to 16-17 year olds but encouraged transport ministers to aspire to give young people fully discounted fares in the long-term.