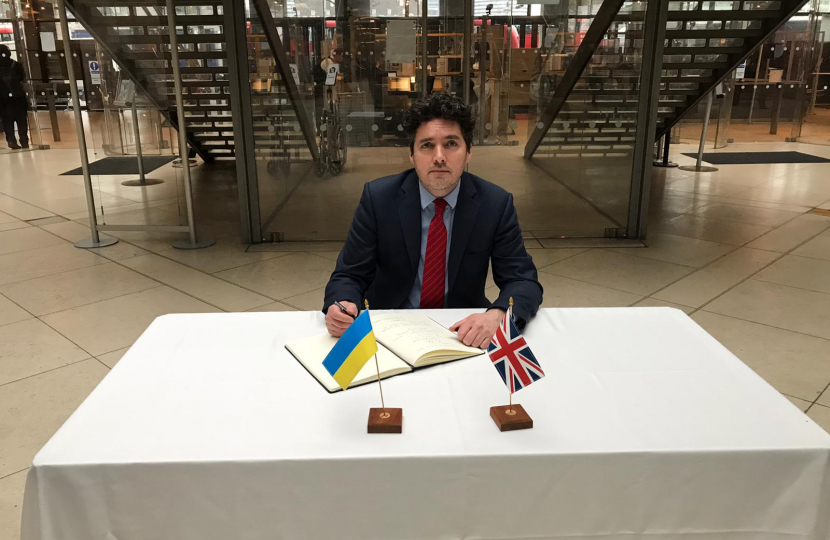 The situation in Ukraine is deeply concerning and I join constituents in being utterly appalled by the actions of President Putin’s regime and horrified by what is unfolding in Ukraine.

Below you will find an update of the Government’s joined up response to the evolving situation.

I have discussed the refugee situation with the Home Secretary and the Prime Minister. The Home Office has been working with the Ukraine Government to come up with a system which balances the need to help refugees and also respects the requests of the Ukrainian Government that we do not destabilise the country even further. Details on the Ukrainian Family Scheme and 'Homes for Ukraine' scheme have now been published, which I have summarised below.

The Ukrainian Family Scheme allows family members of British nationals, UK settled persons and certain others to come or stay in the UK. The scheme is free and does not include any salary or language requirements. Individuals are able to live, work and study in the UK and access public funds.

Applicants to the Scheme must:

Full details and how to apply to the Ukrainian Family Scheme can be found here.

The bespoke Homes for Ukraine scheme will offer a route to those who want to come to the UK who have someone here willing to provide them with a home. Sponsors should provide accommodation for as long as they are able, but there is a minimum expectation of 6 months. Someone is eligible for the scheme if they are a Ukrainian national or the immediate family member of a Ukrainian national, and were resident in Ukraine prior to 1 January 2022.

People arriving under this scheme will be able to:

The scheme will open on Friday 18 March for visa applications from Ukrainians and immediate family members who already have named people willing to sponsor them. People wanting to be sponsors who do not know anyone personally fleeing Ukraine can also record their interest in being a sponsor. People can record their interest as an individual or as an organisation (for example charity, business, community group). There will be no limit or cap on the sponsorship route. The UK will welcome as many Ukrainians, with their immediate family members, as wish to come and for whom there are sponsors.

When will sponsors and Ukrainians be able to apply for the sponsorship scheme?

Who can provide support?

Are people able to state any preferences?

What checks will be undertaken?

What role can organisations play?

Who is eligible for the scheme?

What immigration status, right to work and access to public services/benefits are available?

What security checks will I have to do?

Full details and how to apply to the Homes for Ukraine scheme can be found here.

Taken together, the Home Office estimates these moves are expected to benefit all Ukrainians already in the UK and up to 200,000 more from the Ukraine (a figure that has no limit). To those who take the view that this country is less generous to refugees than the EU countries, the same view was espoused on Afghanistan. We have exceeded our aim of resettling 5,000 Afghan nationals in the first year of the Afghan Citizen Resettlement Scheme in addition to relocating over 7,500 under the Afghan Relocations and Assistance Policy. We have allowed over 75,000 people from Hong Kong to come to this country. This is a generous country and would be more so if social media reflected the facts.

Humanitarian Support: What can constituents do?

In addition to directly helping refugees to settle in the UK, we are providing £220m in emergency and humanitarian aid for Ukraine. This tailored package follows conversations between our Prime Minister and Ukrainian President Zelenskyy.

The funding will help aid agencies respond to the deteriorating humanitarian situation, creating a lifeline for Ukrainians with access to basic necessities and medical supplies such as medicines, syringes, dressings and wound care packs. UK Government humanitarian experts have also deployed to the region to support those fleeing the violence in Ukraine.

Constituents have been contacting me to ask how they can help. If you want to donate money, there are a number of charities providing humanitarian relief in Ukraine. You can Donate to the Disasters Emergency Committee Ukraine Appeal. This is the recommended route, via the UK’s trusted charities and aid agencies. The UK Government will match public donations to this appeal pound-for-pound up to £25 million. Donating cash through our trusted DEC charities and aid organisations, rather than donating goods, is the best way to help. Cash can be transferred quickly to areas where it is needed. Individuals, and aid organisations, can use it to buy what is most needed. We are advised that unsolicited donations of goods, although well-meant, can obstruct supply chains and delay more urgent life-saving assistance from getting through.

The government will be launching a new sponsorship scheme to make sure that Ukrainians who have been forced to flee their homes have a route to safety. The scheme will match people, charities, businesses and community groups to Ukrainians who do not have family ties to the UK. Details of the scheme and how you can apply will be published shortly.

The brave men and women of Ukraine are enduring the barrage and have, so far, held their cities from Russian invaders. They are fighting for their country, for their continued future as a free and independent nation. It is only right that the UK supports in an appropriate way that does not escalate the conflict.

As Ukraine is not part of NATO, the Government’s position is that of the NATO countries as a whole; sending our armed forces, or indeed those of any other country, into Ukraine would trigger a war across Europe. With Putin’s blatant threat of nuclear weapons, this must be avoided. The Prime Minister told me that it was last March when he signed off the application from the Secretary of State for Defence to supply arms and training to the Ukrainian Government. We have been at their side for longer than many other countries but our troops will not be engaged in direct combat with Russian troops.

This would require Parliamentary approval and it would not be granted because Parliament and Government are united on the view that we support the Ukrainian authorities but we will not directly enter into fighting with the Russians.

The UK’s package of sanctions are the strongest economic measures we have ever enacted against Russia and will have destabilising impacts on President Putin and Russia. It is important that we work with our allies to cripple Russia’s economic development both in the short and long term.

More than 300 companies and oligarchs at the heart of Putin’s regime have been hit with sanctions worth hundreds of billions of pounds, asset freezes and travel bans. This includes Russia’s second largest bank (VTB) and Russia’s defence giant (Rostec). Sanctions will also soon be implemented on 571 members of the Duma and Federation Council who sanctioned the invasion of Ukraine.

Our Government is working with allies to go further and it has now been agreed that a number of Russian banks will be excluded from the SWIFT financial system. The UK was an early advocate of this exclusion but we had to first get the other SWIFT countries to agree. This will remove Russia from trillions of dollars-worth of transactions. Effectively, Russia’s international trade will only occur via fax or phone. When Iran was cut out of the system in 2012, it lost 30% of its trade. The assets of the Russian central bank have been frozen, limiting Russia’s access to its overseas reserve.

The Government has also introduced a set of measures to significantly strengthen our trade restrictions against Russia to include a prohibition on the export of a range of high-end and critical technical equipment and components in sectors including electronics, telecommunications and aerospace. The Transport Secretary has banned Aeroflot and all other Russian commercial and private jets from the UK airspace.

The result of these global sanctions has been growing queues at Russian cashpoints, a doubling of interest rates in Russia to 20%, seen the Russians close their own stock market and sent the Russian rouble down by a fifth.

The Economic Crime (Transparency and Enforcement) Bill will be expedited through all its Commons stages on Monday 7 March to strengthen the sanctions regime further. The Government is looking for swift passage in the Lords in order to get Royal Assent as soon as possible.

The measures above are bound to change as the circumstances change. This may mean more humanitarian and refugee support, more sanctions and asset seizures and further support to weaponise the Ukrainian forces. Our aim is to cripple the Russian economy in order for change to occur in Russia. I am afraid that this will have an impact on our own economy, and our own cost of living. A failure to take this drastic action will have even greater ramifications if the despot Putin is not stopped. Our lead against Russia has been widely accepted as having driven a global response. I hope we can stand united in this country and step back from political division.

Supporting Ukraine and the Ukrainian people

Over the last two weeks since my previous column, Parliament has been legislating to strengthen economic sanctions against Russia and prominent Russian citizens. This has involved some late sittings but it’s right we take impactful action.