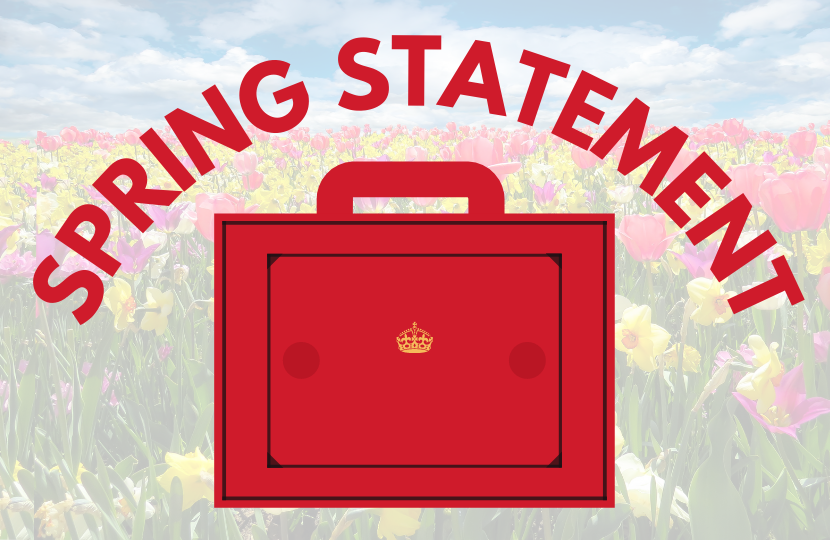 The Chancellor has delivered the Spring Statement and I have summarised the key announcements below.

The National Insurance personal threshold will rise by £3000, from £9,500 to £12,570 from July. This will see 70% of households have their taxes cut by more than what they will pay through the Health and Social Care Levy.

This tax cut is worth more than £330 a year for workers and has been described as ‘the best way to help low and middle earners through the tax system’ by the independent Institute for Fiscal Studies.

From 2024, the basic rate of Income Tax will be cut to 19p per pound. This is the first time in 16 years that Income Tax has been cut and will represent a £5 billion tax cut for over 30 million workers, savers and pensioner.

The cut is scheduled for 2024 because this inflation is forecast to be back under control by then, debt will be falling sustainably and the economy growing.

The cut will be worth around £175 a year for the typical taxpayer.

Fuel Duty will be cut by 5p per litre from 6pm on Wednesday 23 March until March 2023. This is the second cut to Fuel duty in 20 years and the largest ever cut across all fuel duty rates.

Homeowners installing heat pumps, insulation and solar panels will pay zero VAT. This will save a family installing roof top solar panels around £1,000 on installation and then £300 annually on their energy bills.

The Chancellor has allocated £500 million of new funding to the Household Support Fund which helps the most vulnerable families with the cost of living.

The fund is distributed through local authorities who have discretion over exactly how the funding is used, and the additional funding will be available from April.

The Government estimates that it will benefit 3 to 4 million vulnerable households.

From April, Employment Allowance will raise to £5,000 representing a £1,000 tax cut for around half a million small businesses.

The Employment Allowance cuts employer’s national insurance tax bills and this move was recommended by the Federation of Small Businesses.