Plans to tackle the issue of social care 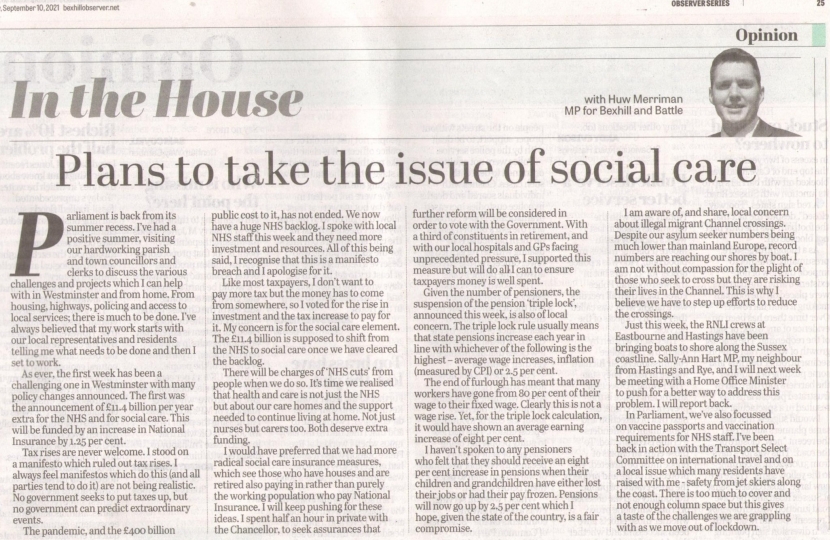 Parliament is back from its summer recess. I’ve had a positive summer, visiting our hardworking Parish and Town Councillors and Clerks to discuss the various challenges and projects which I can help with in Westminster and from home. From housing, highways, policing and access to local services; there is much to be done. I’ve always believed that my work starts with our local representatives and residents telling me what needs to be done and then I set to work.

As ever, the first week has been a challenging one in Westminster with many policy changes announced. The first was the announcement of £11.4 billion per year extra for the NHS and for Social Care. This will be funded by an increase in National Insurance by 1.25%. Tax rises are never welcome. I stood on a manifesto which ruled out tax rises. I always feel manifestos which do this (and all parties tend to do it) are not being realistic. No Government seeks to put taxes up, but no Government can predict extraordinary events. The pandemic, and the £400 billion public cost to it, has not ended. We now have a huge NHS backlog. I spoke with local NHS staff this week and they need more investment and resources. All of this being said, I recognise that this is a manifesto breach and I apologise for it.

Like most taxpayers, I don’t want to pay more tax but the money has to come from somewhere, so I voted for the rise in investment and the tax increase to pay for it. My concern is for the Social Care element. The £11.4 billion is supposed to shift from the NHS to Social Care once we have cleared the backlog. There will be charges of ‘NHS cuts’ from people when we do so. It’s time we realised that health and care is not just the NHS but about our care homes and the support needed to continue living at home. Not just nurses but carers too. Both deserve extra funding.

I would have preferred that we had more radical Social Care insurance measures, which see those who have houses and are retired also paying in rather than purely the working population who pay National Insurance. I will keep pushing for these ideas. I spent half an hour in private with the Chancellor, to seek assurances that further reform will be considered in order to vote with the Government. With a third of constituents in retirement, and with our local hospitals and GPs facing unprecedented pressure, I supported this measure but will do all I can to ensure taxpayers money is well spent.

Given the number of pensioners, the suspension of the pension ‘triple lock’, announced this week, is also of local concern. The triple lock rule usually means that state pensions increase each year in line with whichever of the following is the highest – average wage increases, inflation (measured by CPI) or 2.5%.

The end of furlough has meant that many workers have gone from 80% of their wage to their fixed wage. Clearly this is not a wage rise. Yet, for the triple lock calculation, it would have shown an average earning increase of 8%. I haven’t spoken to any pensioners who felt that they should receive an 8% increase in pensions when their children and grandchildren have either lost their jobs or had their pay frozen. Pensions will now go up by 2.5% which I hope, given the state of the country, is a fair compromise.

I am aware of, and share, local concern about illegal migrant Channel crossings. Despite our asylum seeker numbers being much lower than mainland Europe, record numbers are reaching our shores by boat. I am not without compassion for the plight of those who seek to cross but they are risking their lives in the Channel. This is why I believe we have to step up efforts to reduce the crossings. Just this week, the RNLI crews at Eastbourne and Hastings have been bringing boats to shore along the Sussex coastline. Sally-Ann Hart MP, my neighbour from Hastings and Rye, and I will next week be meeting with a Home Office Minister to push for a better way to address this problem. I will report back.

In Parliament, we’ve also focussed on vaccine passports and vaccination requirements for NHS staff. I’ve been back in action with the Transport Select Committee on international travel and on a local issue which many residents have raised with me - safety from jet skiers along the coast. There is too much to cover and not enough column space but this gives a taste of the challenges we are grappling with as we move out of lockdown.