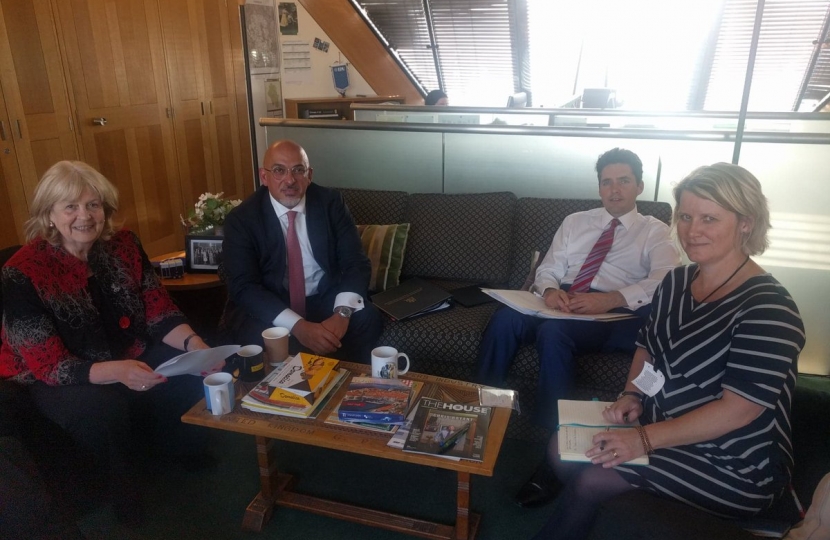 Huw Merriman, MP for Bexhill and Battle, met with Education Minister, Nadhim Zahawi, MP to discuss the Government’s national autism strategy. Huw was joined by representatives from the National Autistic Society and Chair of the All Party Parliamentary Group for Autism, Dame Cheryl Gillan MP.

Huw has long been an advocate for autism issues. In 2017, alongside fellow East Sussex MP Maria Caulfield, he co-chaired a report for the All-Party Parliamentary Group for Autism (APPGA). The report, ‘Autism and Education in England’, found that children on the autism spectrum continued to face significant educational barriers.

The report recommended that understanding of autism should be embedded into the educational system, which would involve more autism-specific training for teachers and reasonable adjustments being made for children on the spectrum. During their meeting, Huw and Dame Cheryl raised the findings of the report with the Minister.

The meeting comes just as the Government has unveiled a national call for evidence on what the national autism strategy should look like. Launched jointly with the Department of Education and the Department of Health and Social Care, the strategy will, for the first time, be extended to children and has so far garnered over 2,000 responses.

Following the meeting with Nadhim Zahawi, Huw took to the chamber to urge the Health Minister Caroline Dinenage, to commit to requiring the NHS to record autism diagnoses in each area with the aim of improving the health of people with autism.

Speaking in his Westminster office, Huw said: “I am regularly contacted by constituents who are struggling to get the right educational provisions for their children and are worried they will fall through the net or are worried their children won’t get the right care in hospital so I very much welcome this new cross-department strategy. Autism is an issue that affects every part of a person’s life and I think this is the right way to go in terms of transforming the way we understand and support people on the spectrum. I encourage all of my constituents to have a say in the government’s national autism strategy and to deliver real change not only for their own children but all young people facing challenges.”

If you would like to contribute to the ‘Think Autism’ strategy, you can do so here: https://consultations.dh.gov.uk/autism/2e4ae18d/ The deadline for submissions is 16 May 2019.

Since being elected as your MP I have spent time visiting parents who have autistic or Asperger’s-impacted children. Seeing first-hand the commitment of the families and how difficult it is for parents to get the support that they need has deeply affected me.