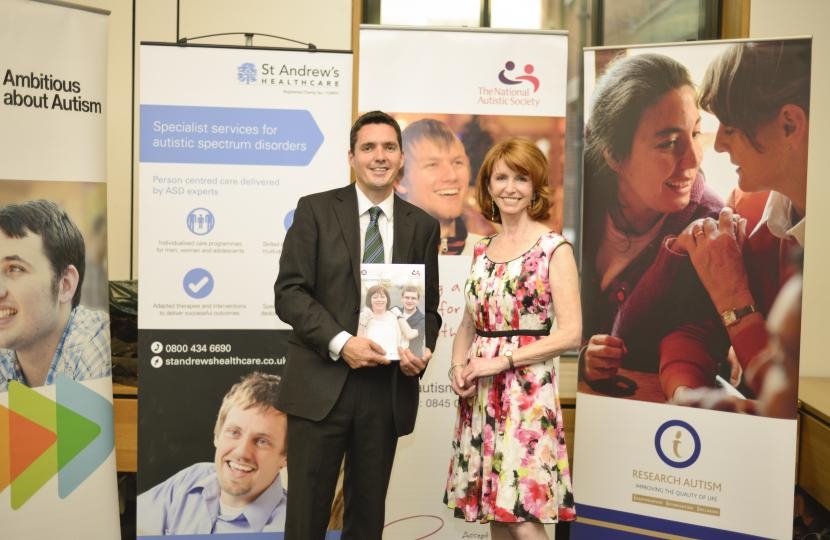 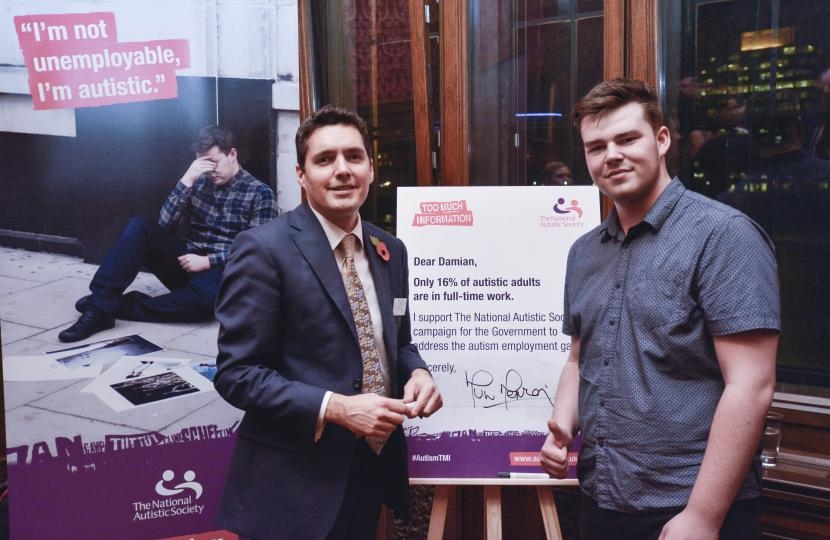 Since being elected as your MP I have spent time visiting parents who have autistic or Asperger’s-impacted children. Seeing first-hand the commitment of the families and how difficult it is for parents to get the support that they need has deeply affected me. I am determined to help where I can, whether it be in the local area or as an officer of the All-Party Parliamentary Group for Autism in Parliament, promoting awareness of Autism.

Having got involved with the APPG for Autism, I became an officer of the group in June 2015. In this role, I have been tasked with writing and publishing a report to highlight the barriers for autistic children in accessing education. This research, being prepared with academics and the NAS, will examine the training and readiness of the education profession in dealing with autistic pupils. It will also assess the ability of parents to access specialist education providers as an alternative to mainstream schooling. This report is scheduled for 2017.

I have become aware in my role in the APPG that awareness for Autism and Autistic spectrum disorders has increased dramatically in the past decade. However, there is still a long way to go. Below I have highlighted my work on achieving progress on these important issues, whilst outlining the improvements the Government has made in the brief time I have been your MP, and highlighting local organisations that do vital and inspiring work.

In June 2015 I pledged to promote more autism awareness in Bexhill and Battle. More details about this can be found via the following link:

For World Autism day in April 2016, I spoke in Parliament, highlighting that autism affects people and their families in different ways. I referenced that those with autism, who have such unique and differing needs, do not fit into the tick-box system of many government agencies. I asked the Minister whether he can find some way of ensuring that anybody who works in these sectors has autism training. Additionally, I also took the time to highlight the unwavering commitment of the two schools specifically catering to Autistic children in the area. My full speech can be found via the following link:

On the 13th of June 2016, I joined the All Party Parliamentary Group for Autism ('APPG for Autism') and the National Autistic Society ('NAS') on a visit to Feltham Young Offenders Institute to view their new autism-friendly wing and understand what the prison service is doing to rehabilitate prisoners and young offenders with autism. On the following day, I spoke in the House of Commons to lobby ministers to do more, via the Justice Bill, on this front. My question can be found via the following link:

On October 18th 2016 I attended the launch of Ambitious about Autism’s new report entitled “When will we learn”. Alongside many other MPs I signed a pledge that aims to improve the education system for those with Autism. The pledge had four parts, with one stating that I will “ensure the rights of children with autism are respected by preventing illegal exclusions and supporting school governors to fulfil their legal responsibility to children with autism”. The other points of this pledge and details of how to support this campaign can be found via the following link:

As an officer of the All-Party Parliamentary Group for Autism, on 31st October 2016 I joined 100 MPs attending the launch of a new National Autistic Society report and campaign in Parliament. This highlighted the shockingly low levels of employment among autistic people and outlined what employers and the Government can do to close the autism employment gap. I will be helping to recruit more autistic young people to our great local businesses. A full account of that day, and my thoughts on this next step is available via the following link: https://www.huwmerriman.org.uk/news/huw-merriman-mp-supports-charitys-call-close-autism-employment-gap

Additionally, I have also spent time with important local organisations such as Little Gate Farm in Beckley, who have programmes dedicated to those with ASD (Link below) to gain the skills which will be attractive to an employer. These organisations are inspiring, and I was grateful to have witnessed first-hand the difference they make in Autistic people’s lives. The issue for Autistic people of transitioning to adulthood and the workforce is often forgotten, and one that I am keen to raise, using this organisation as an example of a successful programme. Positively, the Government has launched a comprehensive Adult Autism Strategy and we are moving towards delivering the improvements in care for those with ASD.

Additionally, for children, the Government is giving continued funding of £1.5 million to the Autism Education Trust to provide autism training to teachers. This ranges from basic awareness training and practical knowledge through to more advanced training for school leaders. Since 2012, the Trust has arranged training for around 50,000 education staff.

Providing greater awareness of Autism is an issue that I have been greatly involved with since you elected me as your MP in May 2015. I will continue to fight for this, using my role as an officer in the All-Party Parliamentary Group for Autism to aid the help I am able to give individuals, and the families of people with Autism.

Other useful links are below:

The January 2016 Government progress report showing what has already been done and the further work needed since the 2014 publication 'Think Autism' may be of interest to you:

The Governments proposals to deliver better outcomes for individuals and their families, alongside more information can be found via the following link:

A petition launched on 27 October calling on the Government to take decisive action to double the number of autistic people in work can be found here: www.Bit.ly/autism-employment-gap

Information about the National Autistic Society can be found via the following link: http://www.autism.org.uk/

More information on the National Autistic Society’s Too Much Information campaign can be found here: www.autism.org.uk/TMI

The National Autistic Society campaign movie can be found via the following link: http://www.autism.org.uk/get-involved/tmi/employment.aspx

Information on local charity Autism Sussex can be found via the following link: http://www.autismsussex.org.uk/

Information on local charity Families for Autism can be found via the following link: http://www.familiesforautism.com/

Information on Little Gate Farm can be found via the following link: http://littlegatecarefarm.co.uk/

Information on the charity Brainwave can be found via the following link: https://www.brainwave.org.uk/

Information on the charity Child Autism can be found via the following link:  http://www.childautism.org.uk/

Information on the Autism awareness charity Autism Independent UK can be found via the following link:  http://www.autismuk.com/

Information on the charity Autism Wishes can be found via the following link: http://www.autismwishes.co.uk/

Information and links to various other Autism charities can be found via the following link to the Autism Alliance website: http://www.autism-alliance.org.uk/about-us/our-members

Information on ASD can be found via the following link:

Local MP and Chair of the All Party Parliamentary Group on Autism, Huw Merriman, has welcomed the Government’s publication of an action-plan to help autistic people and their families to get better help and services in the community.

In Parliament, Huw asked the Work and Pensions Minister what steps the department was taking to help people with disabilities enter work.

Huw Merriman, MP for Bexhill and Battle, met with Education Minister, Nadhim Zahawi, MP to discuss the Government’s national autism strategy. Huw was joined by representatives from the National Autistic Society and Chair of the All Party Parliamentary Group for Autism, Dame Cheryl Gillan MP.

In Parliament, Huw asked the Health and Social Care Minister what steps the department was taking to improve care for people with autism.

Debate: Services for people with Autism

It was an honour to lead the debate in Parliament for Autism Awareness Week. I gave my opening speech on behalf of our All Party Parliamentary Chairman, Dame Cheryl Gillian. It was an inspired debate and speeches followed from MPs from across the country and party divide.

The provision of dedicated Special Educational Needs is not working as it should for many parents or schools in East Sussex or for our County Council.

Sussex MPs, Maria Caulfield and Huw Merriman, have published their national report on the provision of education for children with autism.

Debate on Mental Health and Suicide within the Autism Community

Today Huw spoke in the debate on a motion on Mental Health and Suicide within the Autism Community. You can watch Huw speak here: https://goo.gl/pkQqcp and read his speech below.

Bexhill and Battle MP, Huw Merriman, has given his backing to a scheme that will help children and adults with autism to shop locally with the confidence that retailers will be able to understand them.

During the House of Commons debate on Special Education Needs, Huw asked a question on autism. You can view Huw's question here: https://goo.gl/yYpxGD and read the exchange below: