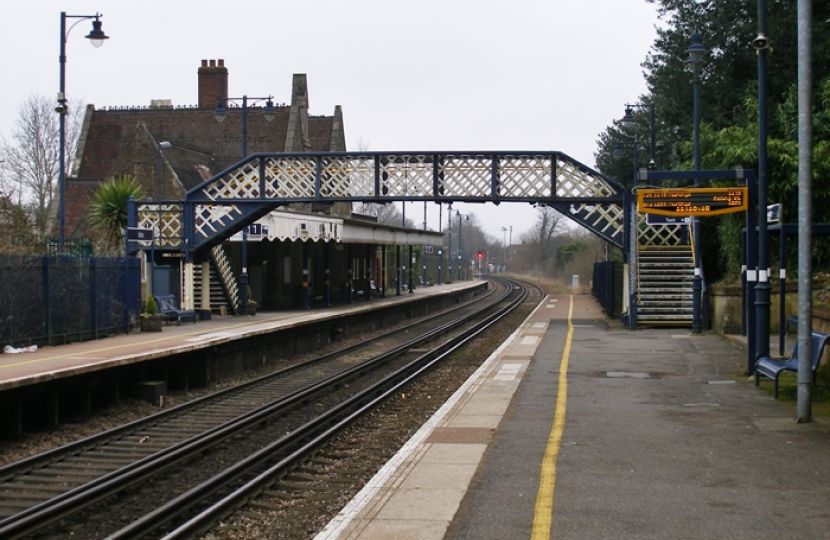 Huw Merriman, MP for the Bexhill and Battle constituency, has asked the Rail Minister, Wendy Morton, for clear criteria to be set out by the Department for Transport for the next Access for All scheme which funds disability access at railway stations.

Huw made this call whilst chairing the Transport Select Committee session on Great British Railways this week. During the session he raised two important issues which impact local residents and business – accessibility and boosting the leisure/tourism rail market.

Battle Station narrowly missed out on the last round of Access for All funding, despite local partners and railway companies building a strong case for its inclusion.  Battle is a significant local commuter station, with many residents from nearby towns, including Bexhill, choosing to travel from Battle Station due to the faster commute time to London.  The station also receives thousands of visitors to the historic town throughout the year and it is therefore key in promoting and supporting sustainable tourism to 1066 country.  Currently the only way of accessing the platforms is by footbridge which excludes people with mobility issues from using the station.

Speaking after the meeting Huw said “I will be putting my support behind the forthcoming Access for All funding bid to make Battle station fully accessible. We did not win funding last time and the rationale as to why the bid failed was not clear. That is why I wanted assurance from the Rail Minister that criteria for the next funding round is absolutely transparent to ensure that stations which succeed in their bids are those which clearly met the criteria. The Minister confirmed that she would take those points back to the Transport department.“

During the Select Committee session, Huw also asked the CEO of Network Rail, Andrew Haines, if under Great British Railways there was an opportunity in Network Rail stations to advertise cultural and tourism gems around the country to encourage growth of the leisure rail market. Mr Haines agreed and confirmed that the station portfolio was an untapped opportunity for growth of the rail travel market. Growth would be achieved by improving stations make them more welcoming,  boost the retail offer and deliver attractive messaging on tourism offers.

Huw commented “Rail companies need to do more to tap into and promote the leisure and tourism market, especially here in Sussex, which is a growing sector for them.  It’s good for the environment and the local economy if more people travel to an area by train for leisure but they will only do so if the whole experience is enjoyable, accessible and reliable. We heard at the Transport Select Committee today that a more joined up rail network under Great British Railways should help to deliver these improvements and provide the opportunity to expand the rail tourism market.”