Driving the Agenda on UK Transport 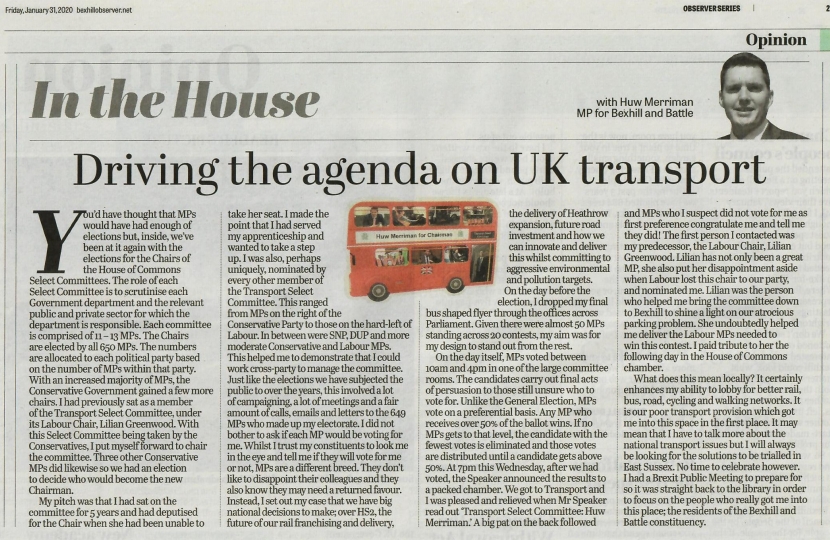 You’d have thought that MPs would have had enough of elections but, inside, we’ve been at it again with the elections for the Chairs of the House of Commons Select Committees. The role of each Select Committee is to scrutinise each Government department and the relevant public and private sector for which the department is responsible. Each committee is comprised of 11 – 13 MPs. The Chairs are elected by all 650 MPs. The numbers are allocated to each political party based on the number of MPs within that party. With an increased majority of MPs, the Conservative Government gained a few more chairs. I had previously sat as a member of the Transport Select Committee, under its Labour Chair, Lilian Greenwood. With this Select Committee being taken by the Conservatives, I put myself forward to chair the committee. Three other Conservative MPs did likewise so we had an election to decide who would become the new Chairman.

My pitch was that I had sat on the committee for 5 years and had deputised for the Chair when she had been unable to take her seat. I made the point that I had served my apprenticeship and wanted to take a step up. I was also, perhaps uniquely, nominated by every other member of the Transport Select Committee. This ranged from MPs on the right of the Conservative Party to those on the hard-left of Labour. In between were SNP, DUP and more moderate Conservative and Labour MPs. This helped me to demonstrate that I could work cross-party to manage the committee. Just like the elections we have subjected the public to over the years, this involved a lot of campaigning, a lot of meetings and a fair amount of calls, emails and letters to the 649 MPs who made up my electorate. I did not bother to ask if each MP would be voting for me. Whilst I trust my constituents to look me in the eye and tell me if they will vote for me or not, MPs are a different breed. They don’t like to disappoint their colleagues and they also know they may need a returned favour. Instead, I set out my case that we have big national decisions to make; over HS2, the future of our rail franchising and delivery, the delivery of Heathrow expansion, future road investment and how we can innovate and deliver this whilst committing to aggressive environmental and pollution targets. On the day before the election, I dropped my final bus shaped flyer through the offices across Parliament. Given there were almost 50 MPs standing across 20 contests, my aim was for my design to stand out from the rest.

On the day itself, MPs voted between 10am and 4pm in one of the large committee rooms. The candidates carry out final acts of persuasion to those still unsure who to vote for. Unlike the General Election, MPs vote on a preferential basis. Any MP who receives over 50% of the ballot wins. If no MPs gets to that level, the candidate with the fewest votes is eliminated and those votes are distributed until a candidate gets above 50%. At 7pm this Wednesday, after we had voted, the Speaker announced the results to a packed chamber. We got to Transport and I was pleased and relieved when Mr Speaker read out ‘Transport Select Committee: Huw Merriman.’ A big pat on the back followed and MPs who I suspect did not vote for me as first preference congratulate me and tell me they did! The first person I contacted was my predecessor, the Labour Chair, Lilian Greenwood. Lilian has not only been a great MP, she also put her disappointment aside when Labour lost this chair to our party, and nominated me. Lilian was the person who helped me bring the committee down to Bexhill to shine a light on our atrocious parking problem. She undoubtedly helped me deliver the Labour MPs needed to win this contest. I paid tribute to her the following day in the House of Commons chamber.

What does this mean locally? It certainly enhances my ability to lobby for better rail, bus, road, cycling and walking networks. It is our poor local transport provision which got me into this space in the first place. It may mean that I have to talk more about the national transport issues but I will always be looking for the solutions to be trialled in East Sussex. No time to celebrate however. I had a Brexit Public Meeting to prepare for so it was straight back to the library in order to focus on the people who really got me into this place; the residents of the Bexhill and Battle constituency.