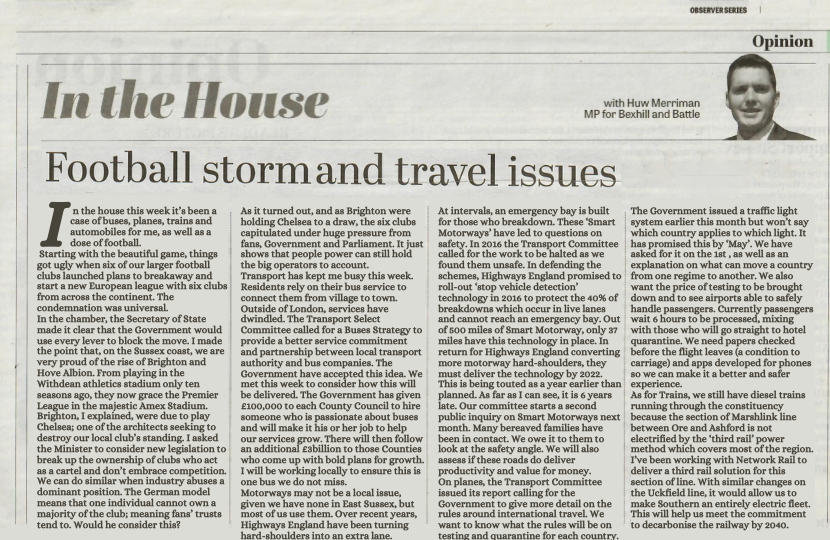 In the house this week it’s been a case of buses, planes, trains and automobiles for me, as well as a dose of football.

Starting with the beautiful game, things got ugly when six of our larger football clubs launched plans to breakaway and start a new European league with six clubs from across the continent. The condemnation was universal.

In the chamber, the Secretary of State made it clear that the Government would use every lever to block the move. I made the point that, on the Sussex coast, we are very proud of the rise of Brighton and Hove Albion. From playing in the Withdean athletics stadium only ten seasons ago, they now grace the Premier League in the majestic Amex Stadium. Brighton, I explained, were due to play Chelsea; one of the architects seeking to destroy our local club’s standing. I asked the Minister to consider new legislation to break up the ownership of clubs who act as a cartel and don’t embrace competition. We can do similar when industry abuses a dominant position. The German model means that one individual cannot own a majority of the club; meaning fans’ trusts tend to. Would he consider this? As it turned out, and as Brighton were holding Chelsea to a draw, the six clubs capitulated under huge pressure from fans, Government and Parliament. It just shows that people power can still hold the big operators to account.

Transport has kept me busy this week. Residents rely on their bus service to connect them from village to town. Outside of London, services have dwindled. The Transport Select Committee called for a Buses Strategy to provide a better service commitment and partnership between local transport authority and bus companies. The Government have accepted this idea. We met this week to consider how this will be delivered. The Government has given £100,000 to each County Council to hire someone who is passionate about buses and will make it his or her job to help our services grow. There will then follow an additional £3billion to those Counties who come up with bold plans for growth. I will be working locally to ensure this is one bus we do not miss.

Motorways may not be a local issue, given we have none in East Sussex, but most of us use them. Over recent years, Highways England have been turning hard-shoulders into an extra lane. At intervals, an emergency bay is built for those who breakdown. These ‘Smart Motorways’ have led to questions on safety. In 2016 the Transport Committee called for the work to be halted as we found them unsafe. In defending the schemes, Highways England promised to roll-out ‘stop vehicle detection’ technology in 2016 to protect the 40% of breakdowns which occur in live lanes and cannot reach an emergency bay. Out of 500 miles of Smart Motorway, only 37 miles have this technology in place. In return for Highways England converting more motorway hard-shoulders, they must deliver the technology by 2022. This is being touted as a year earlier than planned. As far as I can see, it is 6 years late. Our committee starts a second public inquiry on Smart Motorways next month. Many bereaved families have been in contact. We owe it to them to look at the safety angle. We will also assess if these roads do deliver productivity and value for money.

On planes, the Transport Committee issued its report calling for the Government to give more detail on the rules around international travel. We want to know what the rules will be on testing and quarantine for each country. The Government issued a traffic light system earlier this month but won’t say which country applies to which light. It has promised this by ‘May’. We have asked for it on the 1st , as well as an explanation on what can move a country from one regime to another. We also want the price of testing to be brought down and to see airports able to safely handle passengers. Currently passengers wait 6 hours to be processed, mixing with those who will go straight to hotel quarantine. We need papers checked before the flight leaves (a condition to carriage) and apps developed for phones so we can make it a better and safer experience.

As for Trains, we still have diesel trains running through the constituency because the section of Marshlink line between Ore and Ashford is not electrified by the ‘third rail’ power method which covers most of the region. I’ve been working with Network Rail to deliver a third rail solution for this section of line. With similar changes on the Uckfield line, it would allow us to make Southern an entirely electric fleet. This will help us meet the commitment to decarbonise the railway by 2040.