Shutting down Parliament is no way to deliver democracy 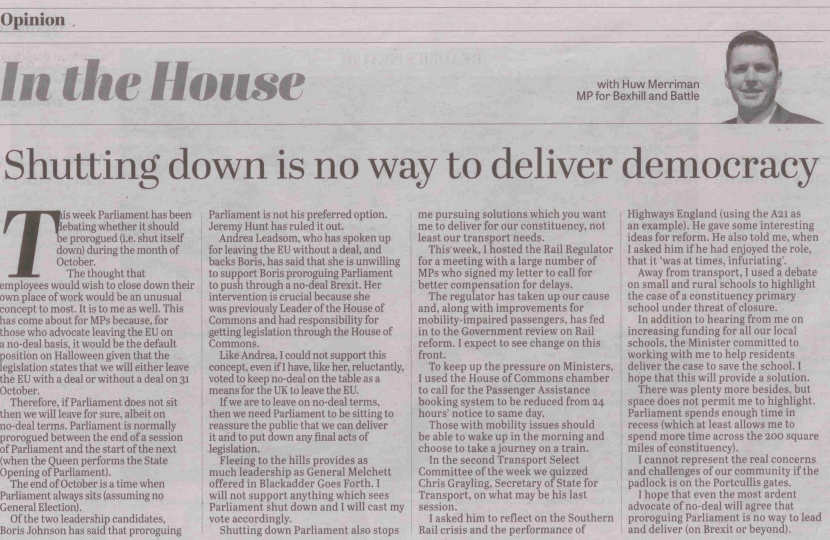 This week Parliament has been debating whether it should be prorogued (i.e. shut itself down) during the month of October. The thought that employees would wish to close down their own place of work would be an unusual concept to most. It is to me as well. This has come about for MPs because, for those who advocate leaving the EU on a no-deal basis, it would be the default position on Halloween given that the legislation states that we will either leave the EU with a deal or without a deal on 31 October. Therefore, if Parliament does not sit then we will leave for sure, albeit on no-deal terms. Parliament is normally prorogued between the end of a session of Parliament and the start of the next (when the Queen performs the State Opening of Parliament). The end of October is a time when Parliament always sits (assuming no General Election).

Of the two leadership candidates, Boris Johnson has said that proroguing Parliament is not his preferred option. Jeremy Hunt has ruled it out. Andrea Leadsom, who has spoken up for leaving the EU without a deal, and backs Boris, has said that she is unwilling to support Boris proroguing Parliament to push through a no-deal Brexit. Her intervention is crucial because she was previously Leader of the House of Commons and had responsibility for getting legislation through the House of Commons. Like Andrea, I could not support this concept, even if I have, like her, reluctantly, voted to keep no-deal on the table as a means for the UK to leave the EU. If we are to leave on no-deal terms, then we need Parliament to be sitting to reassure the public that we can deliver it and to put down any final acts of legislation. Fleeing to the hills provides as much leadership as General Melchett offered in Blackadder Goes Forth. I will not support anything which sees Parliament shut down and I will cast my vote accordingly.

Shutting down Parliament also stops me pursuing solutions which you want me to deliver for our constituency, not least our transport needs.

This week, I hosted the Rail Regulator for a meeting with a large number of MPs who signed my letter to call for better compensation for delays. The regulator has taken up our cause and, along with improvements for mobility-impaired passengers, has fed in to the Government review on Rail reform. I expect to see change on this front. To keep up the pressure on Ministers, I used the House of Commons chamber to call for the Passenger Assistance booking system to be reduced from 24 hours’ notice to same day. Those with mobility issues should be able to wake up in the morning and choose to take a journey on a train.

In the second Transport Select Committee of the week we quizzed Chris Grayling, Secretary of State for Transport, on what may be his last session. I asked him to reflect on the Southern Rail crisis and the performance of Highways England (using the A21 as an example). He gave some interesting ideas for reform. He also told me, when I asked him if he had enjoyed the role, that it ‘was at times, infuriating’.

Away from transport, I used a debate on small and rural schools to highlight the case of a constituency primary school under threat of closure. In addition to hearing from me on increasing funding for all our local schools, the Minister committed to working with me to help residents deliver the case to save the school. I hope that this will provide a solution.

There was plenty more besides, but space does not permit me to highlight. Parliament spends enough time in recess (which at least allows me to spend more time across the 200 square miles of constituency). I cannot represent the real concerns and challenges of our community if the padlock is on the Portcullis gates. I hope that even the most ardent advocate of no-deal will agree that proroguing Parliament is no way to lead and deliver (on Brexit or beyond).