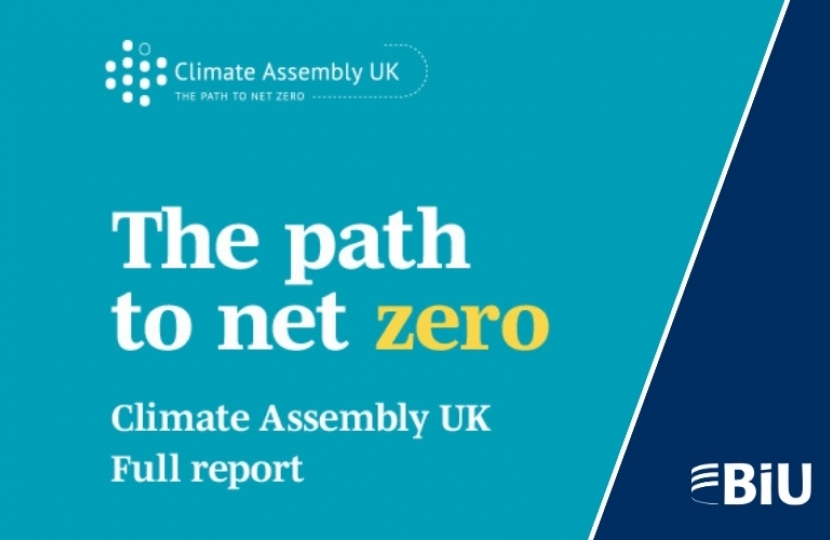 I welcome the Climate Assembly's report on meeting the Govt’s target of net zero greenhouse gas emissions by 2050. The transport sector still contributes 33% of all CO2 emissions in the UK, so I focussed on electric vehicles, decarbonising the rail network, and privatisation of public transport. However, although electrification is currently the only sustainable source of energy for transport, we should be careful not rule out innovations that would make hydrogen a suitable energy source in the future.

"As Chairman of one of the six Select Committees that commissioned Climate Assembly UK to report on how the UK should meet the Government’s target of net zero greenhouse gas emissions by 2050, I warmly welcome the report, thank all those who contributed and look forward to the opportunity to debate the contents in the few minutes that I have. I also thank the hon. Member for Nottingham South (Lilian Greenwood), who was Chair of the Transport Committee when the assembly was commissioned.

First, the assembly called for a ban on the sale of new petrol, diesel and hybrid cars by between 2030 and 2035, and clearly someone has been listening because the Government’s 10-point plan for a green industrial revolution brings forward the date from 2040 set earlier in the year to 2035 and now to 2030. That is an incredibly ambitious target from the Government, and it is going to be a big challenge for the motor manufacturing industry and the charging infrastructure industry to ensure they can deliver.

I am pleased that the Government have pledged £500 million to kickstart that shift, but the key is consumer confidence. It is essential that electric vehicle owners are confident, no matter their household circumstances or their travel plans, that the mode is the correct choice for them, although I understand that there needs to be a sea change and, indeed, ambitious targets must be set if we are ever to deliver a shift away from combustion to electric. I think that that will necessitate a look at pay-as-you-drive, and I am pleased that the Transport Committee will be looking at both the question of ending sales of vehicles with combustion engines by 2030 and new modes to pay for driving.

I also want to touch on the call for Government investment in low-carbon buses and trains. The Government have introduced, or plan to introduce, at least 4,000 more British-built zero-emission buses, which I welcome. In addition, two towns will have electric-only buses. That is a great start.

There is already a plan to decarbonise the rail network by 2040, and the Transport Committee is currently in the midst of the “Trains fit for the future?” inquiry. We stand at a great crossroads: with 15,400 kilometres of track currently non-electrified, we can look at electrification, at battery, or even further into the future towards hydrogen, but if we move solely to electrification, we should consider that 1% of the national grid is already used for electrification on trains and 60% of our energy that creates electricity is regarded as dirty, and thus non-renewable. Therefore, if we increase electrification there is a danger that we will increase our carbon footprint, and if in years to come hydrogen is more ready to be used, it would be a huge shame to have vested everything in electrification—and it is more expensive

as well. That said, there is a big challenge in industry to ensure that we can get the speed, the range and indeed the freight capability for hydrogen, and at present I absolutely admit that electrification is the only game in town.

On the question of adding more bus routes and more frequent services, the Transport Committee called for a bus strategy. I am pleased the Government have done likewise.

I disagree with bringing public transport back under Government control, although some might say that that has already occurred by osmosis. Under privatisation over the past 20 years, rail passenger numbers have doubled, as private enterprise is more incentivised to get people on to rail services than the general taxpayer ever will be, so I disagree with that one part of the report.

There is much more in this fantastic report, however, but I have run out of time. I very much support everything the assembly has done."