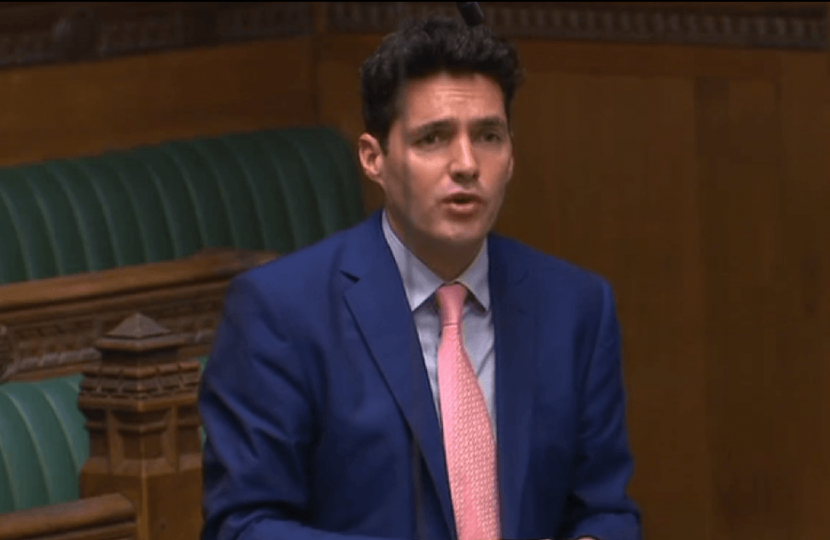 This week, I once again spoke in the Chamber on the worrying topic of knife crime. Knife crime is a blight on our society and an issue close to my heart following my experience working in a youth centre in Brixton and Camberwell Green. I saw first-hand how interventions helped provide young people with a safe space to engage in productive activities, away from a life of crime. The youth centre I worked in prioritised entrepreneurship and meeting the needs of those we worked with, we fund raised so we would not have to rely entirely on local authority funding.

In the debate I spoke in support of recent proposals for 100 new OnSide youth opportunities which would give us the opportunity to build organisations young people want, not what they are told will be provided.

I also acknowledged the importance of recognising the fantastic work Members across the House have been doing to campaign and raise awareness on this issue and I took the opportunity to thank notable MPs such as Sarah Jones who chairs the all-party parliamentary group on knife crime and who has brought in many members of the public so we can hear their concerns and Alison Thewliss MP who was kind enough to speak to Bexhill and Battle constituents recently to discuss the public health approach to tackling knife crime, which has been deployed with success in Glasgow.

While I reflected on the implications of austerity, I pointed out that in 2008 knife crime had gotten out of control under a different government and maintained that this is not a party-political issue, but one that should concern us all.

We need to talk about resources, but also about how current resources are being used and the extent to which responsible organisations having the law on their side, which is why I welcomed the Offensive Weapons Bill becoming law. I also took this opportunity to express interest in knife crime prevention orders and my advocacy of stop and search powers which have had success in getting knives off our streets.

I closed with gratitude for the steps the Government has taken to pursue a public health approach to this challenge but acknowledge that this will take time. In the meantime, I hope we can continue to build a cross-party consensus and call on every MP to take this issue which not only costs lives but also ruins the lives of families seriously.

It is a real pleasure to follow the hon. Member for Lewisham, Deptford (Vicky Foxcroft). I was going to name-check her at the start of my speech, but as she has now spoken, I can express my thanks not just for the way she tirelessly campaigns and demands that we debate the matter in Parliament, as we are doing today, but for her ​speech. She brings so much substance, experience and ideas to the debate and I am very grateful to her. In that spirit, I also pay tribute to the hon. Member for Croydon Central (Sarah Jones), who is not here. She chairs the all-party parliamentary group on knife crime and has brought so many people into Parliament for us as MPs to listen to. She deserves tremendous credit.

If I may spread my love to the Scottish National party Benches, I am grateful to the hon. Member for Glasgow Central (Alison Thewliss), whom I was able to introduce to my constituents when she gave her views on the public health approach in Glasgow to them. I also thank Government Front Benchers. The Minister for Crime, Safeguarding and Vulnerability, who is now on her own on the Front Bench, has given me a lot of time and shown a lot of patience, it is fair to say, with some of my ideas, and I am grateful to her. Her shadow, the hon. Member for Sheffield, Heeley (Louise Haigh) also brings much passion, compassion and intellect to this arena. I therefore believe that, cross-party, there is an opportunity for us to try to drive for more.

My reasons for speaking on the matter are my huge concern about where we are and my desire that we do more. I spent five years working in Brixton and Camberwell Green for a youth centre where I was a manager and a trustee. We were able to make strides in interventions for young people who were either going off the rails or were likely to do that due to their family backgrounds. We were able to intervene and provide them with a safe space and activities such as sport, art, environmental activities and horse riding. We had some great successful groups.

The youth centre was interesting because it had no Government or local authority funding. We fundraised. I spent all my time, in the days before the internet, going through the books, seeing whether I could get money from, for example, the Guinness Trust, Peabody and other groups that would fund us. We were successful in getting the funding. We did not want to be funded by local authorities. Lambeth offered us a small amount of money but we realised that all the entrepreneurship and the way in which we wanted almost to be run by our young people would be sucked out if we had to tick all the local government boxes.

I am therefore genuinely reflecting on the fact that youth centres and the current model are perhaps not the best model. The Home Secretary mentioned the 100 new OnSide youth opportunities. That gives us a chance to set up youth organisations that young people really want rather than what they are told can be provided.

I am also mindful that we have talked about cuts and austerity. Of course I recognise that there is an implication if the funds are not there, but I have cause to reflect on the situation in 2008 when the then Mayor, Ken Livingstone, lost his position very much as a result of the anger that knife crime had got out of control. A new approach was brought in, and I was chatting earlier with the Minister for Housing, whose role it was under that Administration to drive the Met police to do more. He had great success in helping the police to set up Operation Trident, and he made sure that the police’s feet were kept close to the floor. He had photos in his office of all the young people whose lives had been tragically lost, so that when the police came to meet him, they were reminded of exactly what their duty should be, which is of course to protect the public.​

As well as talking about resources, we should talk about how current resources are used and whether we are getting everything out of all the responsible organisations. Of course, in addition to resources, it is a question of powers, and I welcome the fact that the Offensive Weapons Bill is about to become law. I am particularly interested in the knife crime prevention orders, which are undoubtedly a roll of the dice. They are unproven, but the key thing is that the Met police and the Mayor of London have asked for them. There is a feeling that if we do not make an early intervention to stop people being in certain spaces where we have evidence they should not be, or to stop people organising themselves on social media, where we see huge issues of people being inflamed and provoked, we will lead ourselves into endemic knife crime. I am very supportive of these initiatives and, in her summing up, I am keen for the Minister to tell us when we will start to see those orders being used.

I am also a firm advocate of the use of section 60 stop and search powers. We had 1.5 million stop and searches in 2008, which is arguably too many. They have now been targeted but, at 300,000, there is an argument that there are now not enough. We know that 17% of stop and searches lead to an arrest, so they do have some impact.

I will give some time back to the House, because the hon. Member for Lewisham, Deptford, quite rightly having been such an earnest campaigner, took a little more. I am grateful to the Government for taking the steps they have taken, and I want to see us continue with the public health approach. It is exciting to follow what has been done in Glasgow and, looking back 20 years, in Chicago, where the public health approach was first pioneered. There are some great steps.

We need to make sure that we work with all the providers and establishments, particularly the public sector key workers who will be so critical to whether this is a success, in order to join up the schools, the health service and social services. That will take a lot of time and we need to take them with us, particularly when it comes to their new duty to inform.

I am grateful for the steps that the Government have taken, and I hope we can continue to work on a cross-party basis to make sure that more lives are not blighted. We talk about Brexit far too often in this place, and the Benches are packed when we do. If we look around the Chamber today, we see there is hardly anyone here. These issues cost lives and ruin the lives of families, and the fact that MPs are not taking it seriously enough to be here to speak up for their communities is not a good look for this House.