Read: My article in the Telegraph on why I back the people to deliver Brexit 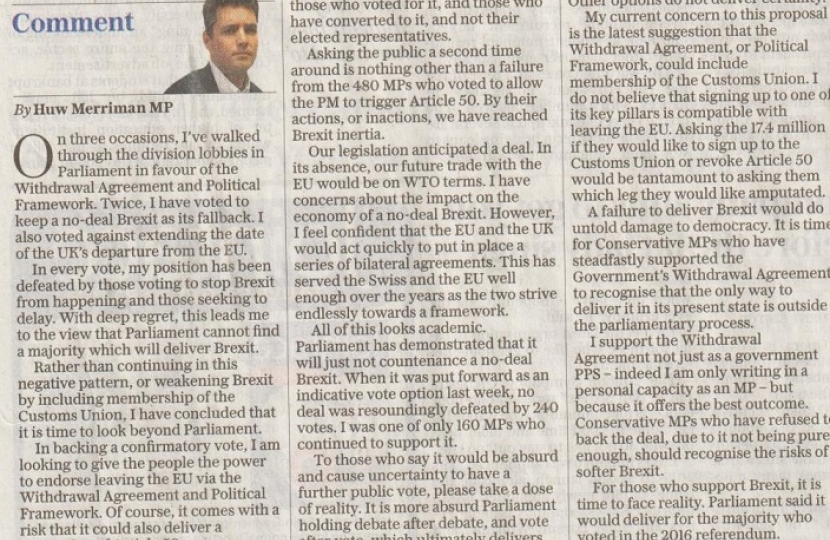 'We have reached Brexit inertia, the only people who can decide what next are those who voted for it'

On three occasions, I've walked through the division lobbies in Parliament in favour of the Withdrawal Agreement and Political Framework. Twice, I have voted to keep a no-deal Brexit as its fallback. I also voted against extending the date of the UK's departure from the EU.

In every vote, my position has been defeated by those voting to stop Brexit from happening and those seeking to delay. With deep regret, this leads me to the view that Parliament cannot find a majority which will deliver Brexit.

Rather than continuing in this negative pattern, or weakening Brexit by including membership of the Customs Union, I have concluded that it is time to look beyond Parliament.

In backing a confirmatory vote, I am looking to give the people the power to endorse leaving the EU via the Withdrawal Agreement and Political Framework. Of course, it comes with a risk that it could also deliver a revocation of Article 50.

I have greater faith in the people delivering Brexit than I do in Parliament. I am therefore confident that the people will take us out of the EU via this confirmatory vote.

I have fiercely opposed a second referendum. It is therefore with a heavy heart that I now feel that the only people who can deliver Brexit are those who voted for it, and those who have converted to it, and not their elected representatives.

Asking the public a second time around is nothing other than a failure from the 480 MPs who voted to allow the PM to trigger Article 50. By their actions, or inactions, we have reached Brexit inertia.

Our legislation anticipated a deal. In its absence, our future trade with the EU would be on WTO terms. I have concerns about the impact on the economy of a no-deal Brexit. However, I feel confident that the EU and the UK would act quickly to put in place a series of bilateral agreements. This has served the Swiss and the EU well enough over the years as the two strive endlessly towards a framework.

All of this looks academic.

Parliament has demonstrated that it will just not countenance a no-deal Brexit. When it was put forward as an indicative vote option last week, no deal was resoundingly defeated by 240 votes. I was one of only 160 MPs who continued to support it.

To those who say it would be absurd and cause uncertainty to have a further public vote, please take a dose of reality. It is more absurd Parliament holding debate after debate, and vote after vote, which ultimately delivers nothing. A confirmatory vote delivers certainty because a vote for the Withdrawal Agreement would become a legally enforceable outcome having already been approved by the EU.

Any other option which Parliament devises, and even assuming a majority can be delivered, will require a new round of negotiations with the EU.

Other options do not deliver certainty.

My current concern to this proposal is the latest suggestion that the Withdrawal Agreement, or Political Framework, could include membership of the Customs Union. I do not believe that signing up to one of its key pillars is compatible with leaving the EU. Asking the 17.4 million if they would like to sign up to the Customs Union or revoke Article 50 would be tantamount to asking them which leg they would like amputated.

A failure to deliver Brexit would do untold damage to democracy. It is time for Conservative MPs who have steadfastly supported the Government's Withdrawal Agreement to recognise that the only way to deliver it in its present state is outside the parliamentary process.

I support the Withdrawal Agreement not just as a government PPS - indeed I am only writing in a personal capacity as an MP - but because it offers the best outcome. Conservative MPs who have refused to back the deal, due to it not being pure enough, should recognise the risks of a softer Brexit.

For those who support Brexit, it is time to face reality. Parliament said it would deliver for the majority who voted in the 2016 referendum.

Parliament has failed to do so. We now need to look at a confirmatory vote as the best apparatus to action Brexit before it gets further undermined or delayed by the same people who promised to deliver it.