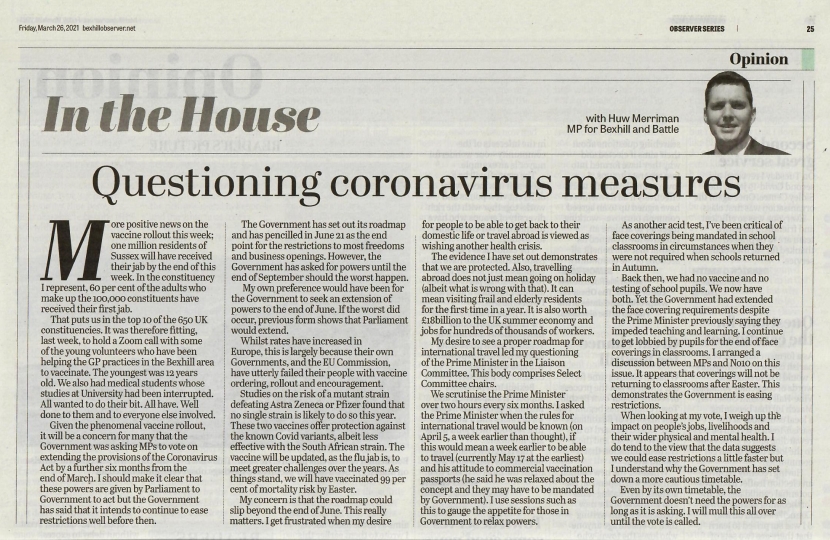 More positive news on the vaccine roll-out this week; one million residents of Sussex will have received their jab by the end of this week. In the constituency I represent, 60% of the adults who make up the 100,000 constituents have received their first jab. That puts us in the Top 10 of the 650 UK constituencies. It was therefore fitting, last week, to hold a zoom call with some of the young volunteers who have been helping the GP practices in the Bexhill area to vaccinate. The youngest was 12 years old. We also had medical students whose studies at University had been interrupted. All wanted to do their bit. All have. Well done to them and to everyone else involved.

My own preference would have been for the Government to seek an extension of powers to the end of June. If the worst did occur, previous form shows that Parliament would extend.

Whilst rates have increased in Europe, this is largely because their own Governments, and the EU Commission, have utterly failed their people with vaccine ordering, roll-out and encouragement.

Studies on the risk of a mutant strain defeating Astra Zeneca or Pfizer found that no single strain is likely to do so this year. These two vaccines offer protection against the known COVID variants, albeit less effective with the South African strain. The vaccine will be updated, as the flu jab is, to meet greater challenges over the years. As things stand, we will have vaccinated 99% of mortality risk by Easter.

My concern is that the roadmap could slip beyond the end of June. This really matters. I get frustrated when my desire for people to be able to get back to their domestic life or travel abroad is viewed as wishing another health crisis. The evidence I have set out demonstrates that we are protected. Also, travelling abroad does not just mean going on holiday (albeit what is wrong with that). It can mean visiting frail and elderly residents for the first time in a year. It is also worth £18 billion to the UK summer economy and jobs for hundreds of thousands of workers.

My desire to see a proper roadmap for international travel led my questioning the Prime Minister in the Liaison Committee. This body comprises Select Committee Chairs. We scrutinise the Prime Minister over two hours every six months. I asked the Prime Minister when the rules for international travel would be known (on 5 April, a week earlier than thought), if this would mean a week earlier to be able to travel (currently 17 May at the earliest) and his attitude to commercial vaccination passports (he said he was relaxed about the concept and they may have to be mandated by Government). I use sessions such as this to gauge the appetite for those in Government to relax powers.

As another acid test, I’ve been critical of face coverings being mandated in school classrooms in circumstances when they were not required when schools returned in Autumn. Back then, we had no vaccine and no testing of school pupils. We now have both. Yet the Government had extended the face covering requirements despite the Prime Minister previously saying they impeded teaching and learning. I continue to get lobbied by pupils for the end of face coverings in classrooms. I arranged a discussion between MPs and No10 on this issue. It appears that coverings will not be returning to classrooms after Easter. This demonstrates the Government is easing restrictions.

When looking at my vote, I weigh up the impact on people’s jobs, livelihoods and their wider physical and mental health. I do tend to the view that the data suggests we could ease restrictions a little faster but I understand why the Government has set down a more cautious timetable. Even by its own timetable, the Government doesn’t need the powers for as long as it is asking. I will mull this all over until the vote is called.