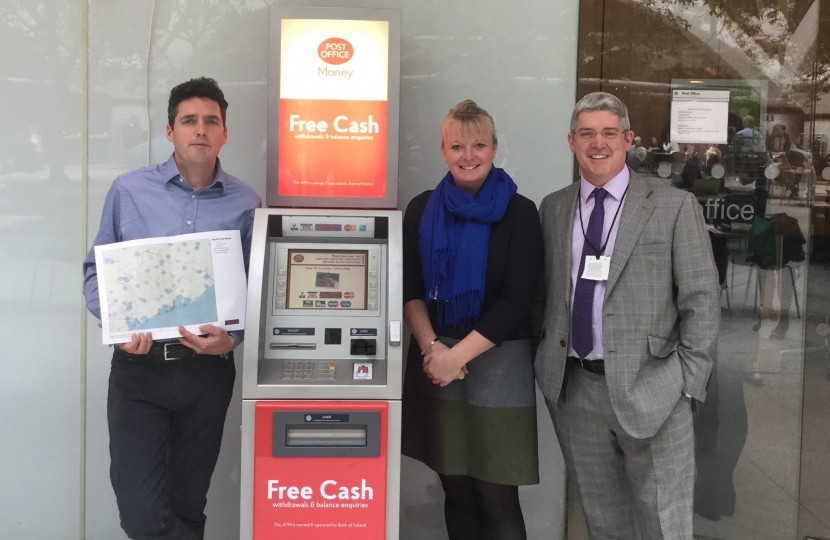 Battle MP, Huw  Merriman, has been working closely with Battle campaigners to bring a 24 hour free cash point back into the heart of the town.

Huw has continued to work with local representatives and key local activist, Paul Redstone, to bring a free cash machine back to the High Street since the last 24/7 cash machine was removed in 2018. Paul began campaigning on this issue whilst standing as the Conservative candidate for Battle in the Rother District Council elections in May. He recognises how important access to cash is for local residents and retailers and is determined to keep fighting for his local town.

As a result of the loss of the cashpoint in Battle, Huw introduced a private members’ bill in Parliament to require banks to ensure that, when branches close, there remains a free and accessible cash machine in towns the size of Battle. This had cross-party support but did not have time to get passed. However, in response to this and to interest shown by the government in Huw’s initiative, the banks and others have been taking action.

Huw said “The growth of cashless shopping has decreased demand for cash which in turn has made cash machines less viable for shopkeepers and others hosting them. However, smaller retailers and services in towns like Battle rely on daily cash transactions.  If just a few customers a day are lost due to lack of cash, then that can be the difference which allows a business to stay open.  Everyone I talk to in Battle – local residents, businesses, town and district councillors and the Chamber of Commerce are worried about the future of their high street. This is why I have made 24/7 access to cash one of my top campaigns. I am grateful to Paul Redstone for his tireless work and support in bringing a cash point back to Battle.”

LINK, the network provider and industry body responsible for the Link network has also taken an active role. Their CEO, John Howells, met Huw in Parliament and is now seeking to support the provision of cash machines in towns such as Battle. Following the meeting in Parliament,  Paul Redstone, recently hosted a visit by Link to Battle which Huw joined.

Paul Redstone said “The representative from Link visited five possible locations including the Crafty Norman (the old Post Office) and the old Nat West Bank, shortly expected to become a new location for the Costa coffee shop. We met with owners or managers, reviewed the potential of sites and discussed commercial issues”.

“As a major tourist venue Battle needs a cash machine in or close to the High Street and accessible 7 days a week from early till late. The ideal is, of course, an external ATM and at least four locations would have the potential for this, though each has some challenges. For example, the planning permission for the new Costa has not yet been granted, though several local councillors are trying to facilitate this.”

The key to installing a 24/7 cashpoint is financial viability. This can be helped by possible subsidies from Link, the banks or elsewhere which are being discussed. In December, Rother District Council unanimously passed a motion which enabled business rates to be waived for cash machines. though a recent High Court ruling (subject to appeal) means that rates may not be charged in any case.

Paul added “I am very hopeful that we will soon have an ATM back in Battle, much to the credit of our MP, Link, owners of local businesses, the Chamber of Commerce and councillors. There is a little way to go, but I plan to keep everyone updated.”

Free 24/7 cashpoints for every high street

Last year I proposed a new law in Parliament calling for a minimum service obligation from banks and building societies to provide a free 24/7 cashpoint in towns and villages with a population of over 5,000 residents.