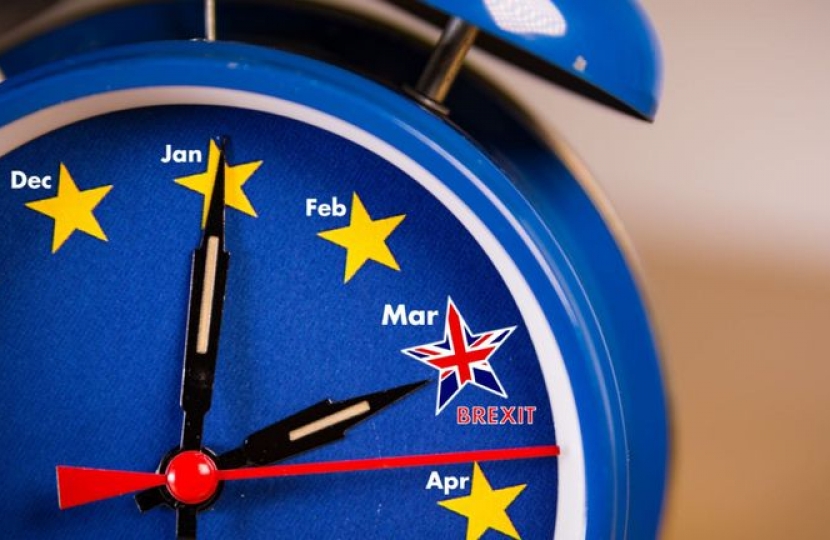 This latest EU update comes after the Prime Minister’s announcement that she will step down and my belief that if Parliament cannot deliver what we promised, then, with enormous disappointment, we need to look for another solution. With my indicative votes, I opted for No Deal and to get a Deal through by asking people, instead of MPs, to deliver it. I voted against any option which involved us being bound by the Single Market or Customs Union.

I view this situation as a complete admission of Parliamentary failure. Throughout the last two years, I have voted for the Deal and for No Deal as a fall-back. A majority of MPs cannot do likewise, or coalesce around an alternative, and this causes me to now reach the conclusion that we may need to look outside of Parliament rather than pretend Parliament can deliver. I hope that I am proved wrong, and a majority vote for the Withdrawal Agreement (if the Speaker allows it to be put).

You may of course completely disagree with my stance, or votes, but I hope you will be willing to follow the logic of the article I have written below and see that at every stage I have opted to vote for something to actually be delivered.

Parliament is not delivering; it is time to be bold

Yet another fortnight of turmoil in Parliament. This has seen the Prime Minister promising her own MPs this week that she will step down once her deal, the Withdrawal Agreement, is ratified by Parliament. This price, it would appear, will be enough to persuade some Conservative MPs to vote for the deal. How appalling that elected representatives will cast possibly the most important vote they may ever have not on the content of legislation but on a change of driver.

Listening to the Prime Minister in a packed room in Parliament (it was not even ‘standing room only’, I was sat on the floor) was a sad moment. This was always going to be a difficult role. Leading the country, with no Parliamentary majority, with such a great challenge was not going to be easy. She has held office with dignity, determination and great resolve. This is a politician who believes in public duty. As she told us, she is not one for touring the bars, being pally and exchanging gossip. This is exactly why I felt she would be the woman of the hour. It has not worked out but I hope that she gets her deal through and that history will be kinder to her than is being reflected at present.

Whilst I will continue to vote for the Prime Minister’s Withdrawal Agreement, it now feels to me a dereliction of duty to view Parliament as providing the home for a solution. This is a complete failure of Parliament. The referendum was promised on the basis that Parliament would honour the result. Over 480 MPs voted for the Prime Minister to trigger Article 50 and take us out of the EU on March 29th 2019. The legislation we passed meant that we would leave with a deal in place with the EU or, in its absence, leave with no deal. We now find that there is no majority in Parliament for either of these options.

I have voted twice for the Prime Minister’s deal. I also voted, two weeks ago, to keep No Deal on the table. Last night, with my indicative votes, I voted for No Deal again. I also voted to put the Deal back to the public for verification. If this happened, it would be a risk for me because the question would be: the Prime Minister’s deal or not leaving at all. However, I feel that the majority of the public would recognise that the referendum result should be honoured and we should deliver it. I would campaign for this outcome and for us to leave the EU. If I think the deal is a good agreement, and I do, and I believe Parliament cannot deliver, I need to be bold enough to admit it and back something which will deliver it.

I rejected every other option offered to us by MPs in these free ‘indicative’ votes. Solutions which would see us in the Customs Union or Single Market mean we really would end up being bound by the rules of the EU but with no say as to how these evolve.

Backing a second public vote is something I am very uncomfortable with. I have always been against another public vote. Being in Parliament, and seeing a lack of compromise or pragmatism, has brought me to a place where I feel that the home of democracy, and my own place of work, has to be bypassed in order to get the result which it had previously promised.

I recognise that the public are upset and disappointed with Parliament. I feel this most acutely. It is a huge disappointment to me because I left an interesting job to become an MP as I wanted to make a positive difference and work in public service. Making negative decisions means no progress and a public disservice. Rather than feel sorry for myself, I am resolved to be bold and to seek solutions.  This Saturday, I am holding a public meeting at St Augustine’s Church, Bexhill, at 11am to which all constituents are welcome. I hope that even if you disagree with my views, you will recognise that it is better to be forthright than to hide.