EU Update: Taking ‘no deal’ off the table and extending EU membership 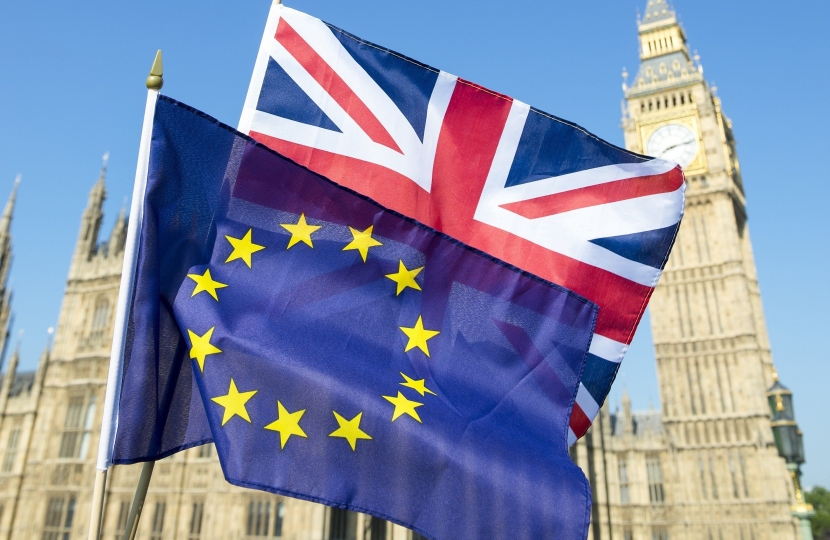 As you may be aware, last week, the Prime Minister’s deal with the EU was rejected by MPs for the second time, albeit by a reduced margin. In the aftermath, the Prime Minister promised MPs two days of debate, followed by votes. These votes are taking place this week.

Taking ‘No Deal’ off the table

The first was a vote on whether the UK should ever leave the EU without a deal being in place. Conservative MPs were offered a free vote (meaning no pressure from our whips to vote a particular way). The Government prepared the motion. The details of the motion were, effectively, to say that the House desires a departure by the end of March with a deal but, if such a deal could not be passed, the default option remained for the UK to leave without a deal. As an MP who has twice voted for the UK/EU deal, but wishes to ensure that we ultimately leave as we promised in the referendum and last election, this somewhat circular scenario was fine for me. It was clearly too nuanced for other MPs and an amendment was tabled which made it absolutely clear that the UK would never leave the EU on ‘no deal’ terms, come what may. This amendment, whilst not binding, was passed with a majority of just 4 votes (thereby amending the Government’s original motion). The Government then found itself having to ask its own MPs to reject its own motion, now amended, because it would have completely taken ‘no deal’ off the table. Doing so was not supported by the Government due to it being a poor way to keep our best cards during potential negotiations and contrary to the position in legislation which dictates that we leave in this way if a deal cannot be passed.

I am aware that many constituents follow proceedings in Parliament with interest and in great detail but it is fair to say that there were MPs who were confused as to what was proceeding. It is a good example of how Parliament can talk at length but voting, and amending motions following a vote, can be quite dramatic. In the instance of the final vote of last night, the motion was not even written out before the division bell rang.

I voted to keep ‘no deal’ on the table. I have spoken publicly about the deep concern to economic damage which I hold over leaving without a deal but it remains our biggest card to either get concessions or to cause MPs, who do not support leaving the EU, to make a choice between agreeing the Prime Minister’s deal or leaving with ‘no deal’. I accept that I am in the minority of MPs, however. By 43 votes, MPs voted to take ‘no deal’ off the table. Four cabinet members, and a number of Ministers, failed to vote with the Government and are still in post.

The situation as I write means that Parliament has failed to back the Prime Minister’s deal and has failed to accept leaving without a deal. As of 8am on Thursday morning, this means that we have to leave the EU on 29 March under some other agreed basis. This clearly cannot work, not least because the EU are only currently willing to accept agreeing on the terms struck with the Prime Minister. As a result, later today, we will have the second key vote; whether to extend the date when the UK leaves the EU.

I suspect that MPs will trigger a delay to the UK leaving the EU. This would have to be agreed with the EU. As I said during an interview with BBC Radio 5Live, deadlines lead to ‘crunch time’ which leads to delivery.

A majority of MPs have done nothing but vote against anything happening. Giving MPs more time will, in my view, just lead to more indecision and be hugely damaging to the faith many have in democracy. Whilst I had economic concerns around ‘no deal’, I have deep concerns that the uncertainty and delay is causing business and consumer confidence to be impacted.

I have voted, firstly, to leave on agreed terms. I have, with some reluctance due to my economic concerns, voted to keep to our original default option of leaving on no deal terms. Unless something dramatic happens to the wording of the motion after this update is sent, I will vote to keep our departure date as 29 March without any further extension. Regardless of your views on my stance, these actions were the basis of the manifesto which got me re-elected in 2017 (and got Labour MPs elected) and has been in law since 480 MPs voted to ask the Prime Minister to trigger Article 50 and commence this process. I am truly sorry that Parliament cannot follow through on its promises and I know that many of you will be bewildered by what you are hearing and seeing. Others may be bewildered that I did not vote to take ‘no deal’ off the table. As I have said before, this is an invidious position for me but I feel my voting record on this matter is consistent and aligned with the manifesto when I was last elected.