Delivering the case for transport 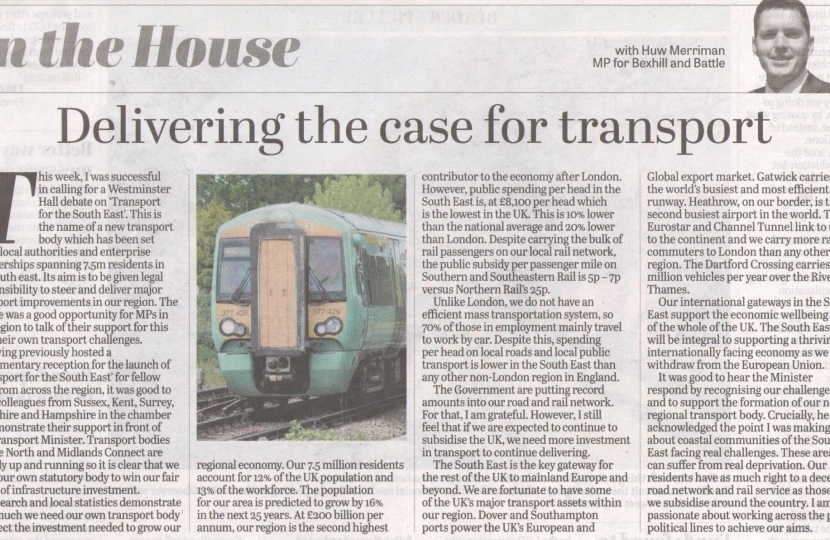 This week, I was successful in calling for a Westminster Hall debate on ‘Transport for the South East’. This is the name of a new transport body which has been set up by local authorities and enterprise partnerships spanning 7.5m residents in the south east. Its aim is to be given legal responsibility to steer and deliver major transport improvements in our region. The debate was a good opportunity for MPs in our region to talk of their support for this and their own transport challenges.

Having previously hosted a Parliamentary reception for the launch of ‘Transport for the South East’ for fellow MPs from across the region, it was good to have colleagues from Sussex, Kent, Surrey, Berkshire and Hampshire in the chamber to demonstrate their support in front of the Transport Minister. Transport bodies for the North and Midlands Connect are already up and running so it is clear that we need our own statutory body to win our fair share of infrastructure investment.

Research and local statistics demonstrate how much we need our own transport body to direct the investment needed to grow our regional economy. Our 7.5 million residents account for 12% of the UK population and 13% of the workforce. The population for our area is predicted to grow by 16% in the next 25 years. At £200 billion per annum, our region is the second highest contributor to the economy after London. However, public spending per head in the South East is, at £8,100 per head which is the lowest in the UK. This is 10% lower than the national average and 20% lower than London. Despite carrying the bulk of rail passengers on our local rail network, the public subsidy per passenger mile on Southern and Southeastern Rail is 5p – 7p versus Northern Rail’s 25p.

Unlike London, we do not have an efficient mass transportation system, so 70% of those in employment mainly travel to work by car. Despite this, spending per head on local roads and local public transport is lower in the South East than any other non-London region in England.

The Government are putting record amounts into our road and rail network. For that, I am grateful. However, I still feel that if we are expected to continue to subsidise the UK, we need more investment in transport to continue delivering.

The South East is the key gateway for the rest of the UK to mainland Europe and beyond. We are fortunate to have some of the UK’s major transport assets within our region. Dover and Southampton ports power the UK’s European and Global export market. Gatwick carries the world’s busiest and most efficient runway. Heathrow, on our border, is the second busiest airport in the world. The Eurostar and Channel Tunnel link to us to the continent and we carry more rail commuters to London than any other region. The Dartford Crossing carries 50 million vehicles per year over the River Thames.

Our international gateways in the South East support the economic wellbeing of the whole of the UK. The South East will be integral to supporting a thriving, internationally facing economy as we withdraw from the European Union.

It was good to hear the Minister respond by recognising our challenges and to support the formation of our new regional transport body. Crucially, he acknowledged the point I was making about coastal communities of the South East facing real challenges. These areas can suffer from real deprivation. Our residents have as much right to a decent road network and rail service as those we subsidise around the country. I am passionate about working across the party political lines to achieve our aims.

I am working with local Conservative MPs and Councillors and the rail authorities to deliver direct trains from Bexhill to London (via Ashford). A fleet of new trains will deliver a journey time of just 78 minutes.  I will work with our partners to deliver the business case and lobby to turn this into reality. The impact on our community, from increased investment, jobs and tourists, would be vast and would link us to our capital and beyond.