Boris doesn't seem capable of working like most Chief Executives 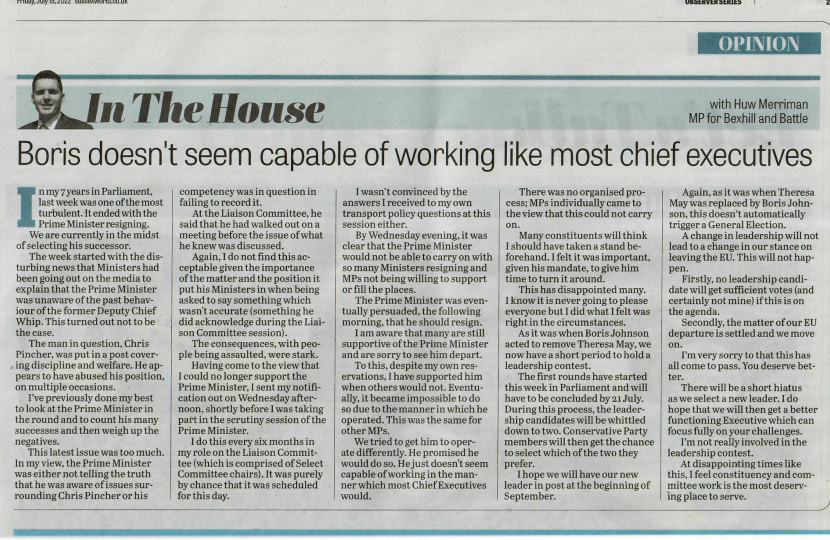 In my 7 years in Parliament, last week was one of the most turbulent. It ended with the Prime Minister resigning. We are currently in the midst of selecting his successor.

The week started with the disturbing news that Ministers had been going out on the media to explain that the Prime Minister was unaware of the past behaviour of the former Deputy Chief Whip. This turned out not to be the case. The man in question, Chris Pincher, was put in a post covering discipline and welfare. He appears to have abused his position, on multiple occasions.

I’ve previously done my best to look at the Prime Minister in the round and to count his many successes and then weigh up the negatives. This latest issue was too much. In my view, the Prime Minister was either not telling the truth that he was aware of issues surrounding Chris Pincher or his competency was in question in failing to record it. At the Liaison Committee, he said that he had walked out on a meeting before the issue of what he knew was discussed. Again, I do not find this acceptable given the importance of the matter and the position it put his Ministers in when being asked to say something which wasn't accurate (something he did acknowledge during the Liaison Committee session). The consequences, with people being assaulted, were stark.

Having come to the view that I could no longer support the Prime Minister, I sent my notification out on Wednesday afternoon, shortly before I was taking part in the scrutiny session of the Prime Minister. I do this every six months in my role on the Liaison Committee (which is comprised of Select Committee chairs). It was purely by chance that it was scheduled for this day. I wasn’t convinced by the answers I  received to my own transport policy questions at this session either.

By Wednesday evening, it was clear that the Prime Minister would not be able to carry on with so many Ministers resigning and MPs not being willing to support or fill the places. The Prime Minister was eventually persuaded, the following morning, that he should resign.

I am aware that many are still supportive of the Prime Minister and are sorry to see him depart. To this, despite my own reservations, I have supported him when others would not. Eventually, it became impossible to do so due to the manner in which he operated. This was the same for other MPs.

We tried to get him to operate differently. He promised he would do so. He just doesn't seem capable of working in the manner which most Chief Executives would. There was no organised process; MPs individually came to the view that this could not carry on.

Many constituents will think I should have taken a stand beforehand. I felt it was important, given his mandate, to give him time to turn it around. This has disappointed many. I know it is never going to please everyone but I did what I felt was right in the circumstances.

As it was when Boris Johnson acted to remove Theresa May, we now have a short period to hold a leadership contest. The first rounds have started this week in Parliament and will have to be concluded by 21 July. During this process, the leadership candidates will be whittled down to two. Conservative Party members will then get the chance to select which of the two they prefer. I hope we will have our new leader in post at the beginning of September. Again, as it was when Theresa May was replaced by Boris Johnson, this doesn’t automatically trigger a General Election.

A change in leadership will not lead to a change in our stance on leaving the EU. This will not happen. Firstly, no leadership candidate will get sufficient votes (and certainly not mine) if this is on the agenda. Secondly, the matter of our EU departure is settled and we move on.

I’m very sorry to that this has all come to pass. You deserve better. There will be a short hiatus as we select a new leader. I do hope that we will then get a better functioning Executive which can focus fully on your challenges. I’m not really involved in the leadership contest. At disappointing times like this, I feel constituency and committee work is the most deserving place to serve.