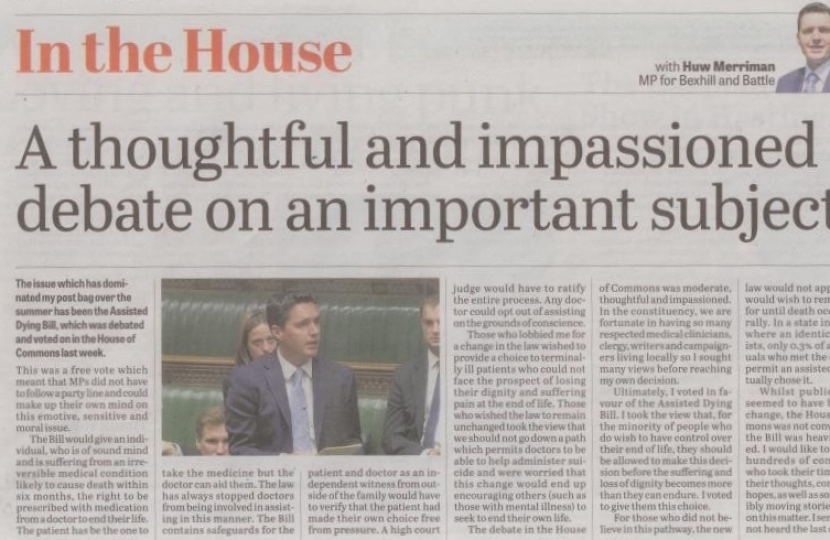 The issue which has dominated my post bag over the summer has been the Assisted Dying Bill, which was debated and voted on in the House of Commons last week. This was a free vote which meant that MPs did not have to follow a party line and could make up their own mind on this emotive, sensitive and moral issue.

The Bill would give an individual, who is of sound mind and is suffering from an irreversible medical condition likely to cause death within six months, the right to be prescribed with medication from a doctor to end their life. The patient has be the one to take the medicine but the doctor can aid them. The law has always stopped doctors from being involved in assisting in this manner. The Bill contains safeguards for the patient and doctor as an independent witness from outside of the family would have to verify that the patient had made their own choice free from pressure. A high court judge would have to ratify the entire process. Any doctor could opt out of assisting on the grounds of conscience.

Those who lobbied me for a change in the law wished to provide a choice to terminally ill patients who could not face the prospect of losing their dignity and suffering pain at the end of life. Those who wished the law to remain unchanged took the view that we should not go down a path which permits doctors to be able to help administer suicide and were worried that this change would end up encouraging others (such as those with mental illness) to seek to end their own life.

The debate in the House of Commons was moderate, thoughtful and impassioned. In the constituency, we are fortunate in having so many respected medical clinicians, clergy, writers and campaigners living locally so I sought many views before reaching my own decision.

Ultimately, I voted in favour of the Assisted Dying Bill. I took the view that, for the minority of people who do wish to have control over their end of life, they should be allowed to make this decision before the suffering and loss of dignity becomes more than they can endure.  I voted to give them this choice.

For those who did not believe in this pathway, the new law would not apply as they would wish to remain cared for until death occurs naturally. In a state in America, where an identical law exists, only 0.3% of all individuals who met the criteria to permit an assisted death actually chose it.

Whilst public opinion seemed to have been with change, the House of Commons was not convinced and the Bill was heavily defeated. I would like to thank the hundreds of constituents who took their time to share their thoughts, concerns and hopes, as well as some incredibly moving stories, with me on this matter. I sense we have not heard the last of it.