Why I voted against delaying 'Freedom Day' 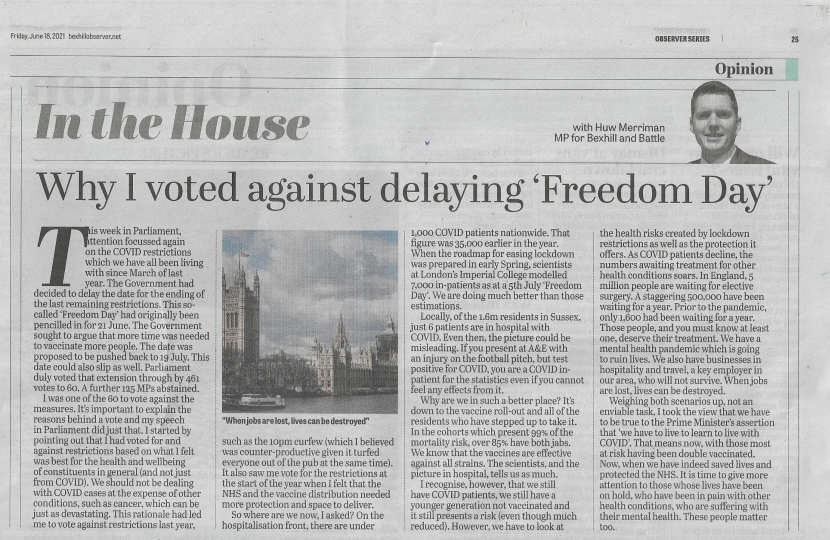 This week in Parliament, attention focussed again on the COVID restrictions which we have all been living with since March of last year. The Government had decided to delay the date for the ending of the last remaining restrictions. This so-called ‘Freedom Day’ had originally been pencilled in for 21 June. The Government sought to argue that more time was needed to vaccinate more people. The date was proposed to be pushed back to 19 July. This date could also slip as well. Parliament duly voted that extension through by 461 votes to 60. A further 125 MPs abstained.

I was one of the 60 to vote against the measures. It’s important to explain the reasons behind a vote and my speech in Parliament did just that. I started by pointing out that I had voted for and against restrictions based on what I felt was best for the health and wellbeing of constituents in general (and not just from COVID). We should not be dealing with COVID cases at the expense of other conditions, such as cancer, which can be just as devastating. This rationale had led me to vote against restrictions last year, such as the 10pm curfew (which I believed was counter-productive given it turfed everyone out of the pub at the same time). It also saw me vote for the restrictions at the start of the year when I felt that the NHS and the vaccine distribution needed more protection and space to deliver.

So where are we now, I asked? On the hospitalisation front, there are under 1,000 COVID patients nationwide. That figure was 35,000 earlier in the year. When the roadmap for easing lockdown was prepared in early Spring, scientists at London’s Imperial College modelled 7,000 in-patients as at a 5th July ‘Freedom Day’. We are doing much better than those estimations.

Locally, of the 1.6m residents in Sussex, just 6 patients are in hospital with COVID. Even then, the picture could be misleading. If you present at A&E with an injury on the football pitch, but test positive for COVID, you are a COVID in-patient for the statistics even if you cannot feel any effects from it.

Why are we in such a better place? It’s down to the vaccine roll-out and all of the residents who have stepped up to take it. In the cohorts which present 99% of the mortality risk, over 85% have both jabs. We know that the vaccines are effective against all strains. The scientists, and the picture in hospital, tells us as much.

I recognise, however, that we still have COVID patients, we still have a younger generation not vaccinated and it still presents a risk (even though much reduced). However, we have to look at the health risks created by lockdown restrictions as well as the protection it offers. As COVID patients decline, the numbers awaiting treatment for other health conditions soars. In England, 5 million people are waiting for elective surgery. A staggering 500,000 have been waiting for a year. Prior to the pandemic, only 1,600 had been waiting for a year. Those people, and you must know at least one, deserve their treatment. We have a mental health pandemic which is going to ruin lives. We also have businesses in hospitality and travel, a key employer in our area, who will not survive. When jobs are lost, lives can be destroyed.

Weighing both scenarios up, not an enviable task, I took the view that we have to be true to the Prime Minister’s assertion that ‘we have to live to learn to live with COVID’. That means now, with those most at risk having been double vaccinated. Now, when we have indeed saved lives and protected the NHS. It is time to give more attention to those whose lives have been on hold, who have been in pain with other health conditions, who are suffering with their mental health. These people matter too.