Universal Credit in Bexhill and Battle Constituency: My Experience 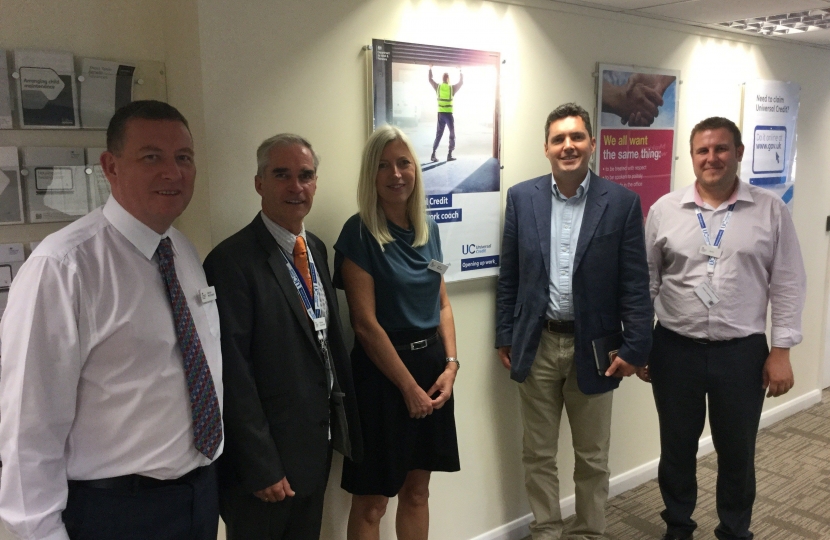 Universal Credit is a new benefit system which will replace six existing benefits for people who are on low income or are out of work. The programme is being rolled out across the UK in stages and was introduced for some constituents in Rother over the summer. The aim of Universal Credit is to deliver a simpler form of benefits system which is underpinned by the principle that it always pays to be in work. Rather than individuals remaining on benefits because the alternative in employment could be temporary or less financially rewarding at certain times, Universal Credit allows claimants (now termed ‘clients’) to work and repay benefits they had already received for the same period. Not only does it give this flexibility, it also allows the individual to pay only 63p back from every pound of benefits received whilst also working. In addition to helping people move off benefits and in to work, the Universal Credit programme will support those in employment who are looking to increase their hours or obtain better paid jobs.

To see for myself, I spent a morning with the Bexhill team who are responsible for rolling out Universal Credit in Rother. In the afternoon, I visited the Job Centre Plus team in Hastings, where Universal Credit was rolled out at the start of the year and has now bedded in. In both Bexhill and Hastings, I was able to sit with the new Job Coaches, who advise constituents how they can find work or increase their existing work opportunities, and with the constituents who came to their desks. Here is a run-through of my day:

My day starts at Bexhill Job Centre where I meet the Department and Work and Pensions team (‘DWP’) with the responsibility for Universal Credit roll-out in Sussex. The team tell me about the training and preparation which they have been involved in to ensure that they are ready for the introduction of Universal Credit. We also discuss some challenges which, understandably, exist with the transition. Before going in-depth with this team, I spend time with one of the new Jobs Coaches who are in place to assess where clients are on their journey to securing employment and how they can move closer to securing work. The Job Coach I meet is incredibly enthusiastic. He tells me about a constituent with disabilities who had languished on benefits for over ten years with the system not reaching out to see if this person was able, with the advances over recent years, to work. The Job Coach tells me that with the relationship being cemented, he is now helping this constituent to consider options which may be available. The Jobs Coach is adamant that the constituent has positively embraced the help and is now dealing with other issues arising from disability. I am pleased to be told that, rather than a Yes/No tick-box system, every client under Universal Credit is assessed for what they can offer with much greater discretion in the system for the individual to be catered for and helped. It feels to me that the Job Coaches feel empowered and are passionate about changing outcomes for the better.

I then return to the DWP team to discuss the journey of Universal Credit, the training which has been undertaken and the changes in the environment. Universal Credit was first tested in a small number of pilot projects across the UK from 2013 (the first being in Manchester). Since then, Universal Credit has been gradually rolled out to other regions. Hastings went live in December 2016 with the Rother roll-out in July 2017. Rather than put all existing claimants on Universal Credit, it is only those with a change in circumstances or those new to the benefits system, who will migrate to Universal Credit. This orderly process should make the implementation smoother. From October of this year, 50 other regions will have Universal Credit rolled out so the programme steps up.

I am taken through the website which provides the basis for claimants to open up an account which will be needed for benefits to be paid and for a Jobs Coach to be assigned to help the claimant find work or increase hours. The IT platform has all been designed in-house, meaning that any changes agreed following the roll-out can be done quickly rather than being left with external consultants and lost in time. Some 90% of the interaction is expected to be on-line. For those who have difficulty navigating the system, Rother District Council are being paid to provide assistance on the ground. Rother District Council have outsourced this task to Citizens Advice, who have made me aware that they are grappling with issues. I take the DWP team across the road to the Citizens Advice bureau in Bexhill to discuss these issues but, unfortunately, their office is closed. Ultimately, the queries will be addressed back to each Universal Credit service centre. Rother’s service centre is currently in Cornwall but will, in a short time, be moved to Northern Ireland. On the basis that the cases of hardship may involve those with severe issues who are unable to navigate the system, it is vital that these service centres are able to deal with the future roll-out. This appears a key challenge to me.

I am impressed by the level of training which has been undertaken. This has been undertaken for all staff involved in Universal Credit and the DWP team have also trained all agencies and bodies, such as the District Council, who will interact with Universal Credit. As a local MP who will be dealing with constituents on benefits, this includes me hence I am glad to be trained. Much of the training for front-line staff, is to allow them to embrace a new culture where they will have more discretion, more scope to help and will see any accusations of jobsworth officialdom replaced by a positive attitude in an environment which feels more like a recruitment agency than a benefits office. I am particularly pleased to find that Jobs Coaches can get expertise and support from a range of advisors who are best placed to help them when claimants present themselves with conditions ranging from mobility impairment, mental health to addictions.

As for the experience in Rother, it is early days. There are only 200 Universal Credit claimants which have been moved over, in order to deliver a smooth transition. 95% of these cases are receiving some form of payment between making their claim and the first assessment period (which is 6 weeks long). The 5% gap is largely down to the claimant not completing the process as has been requested. This can cause hardship, however, so I am struck that more intervention may be needed. Ultimately, as I have been demonstrated, the new system is simpler but it does still require the individual, where they can, to take responsibility for themselves.

With Rother only having 200 Universal Claimants, I head over to Hastings Job Centre Plus where they now have 4,000 claimants who have migrated to Universal Credit. After meeting the team, I sit with a Jobs Coach who has a number of appointments with individuals who are looking for benefits and work. One individual is in his early twenties and has not found work since leaving school at 18 years old. He had been told that he would be given a sanction to his benefit payment if he did not demonstrate that he was looking for work for the period before he goes to University. Despite not having done what was asked of him, which included researching job opportunities, the Jobs Coach gives him one more chance using the discretion that she has to decide that it is worth one final piece of encouragement. To those who say that Universal Credit is a harsher benefit system, I have just met someone who would, via the computer, have lost some of his benefits if on JSA. The discretion allows the Jobs Coach to decide the best strategy to adopt, albeit she has to complete the computer process to ensure there is rigour in the system. I meet other claimants and then discuss how the fully rolled out process has been working over the last six months. I am greatly encouraged at how morale in the Jobs Centre Plus has been lifted by Universal Credit and how they believe it is making a real difference in getting people off work and in to benefits and improving outcomes. There are still challenges to overcome but, with our unemployment rate having dropped to record levels, much of this relates to encouraging more local employers to give a chance to those who are harder to replace. Perhaps, as I heard about one individual, it is helping to rehabilitate prisoners and giving them a chance.

Universal Credit is more than just a change from six benefits to one. It is about sending a signal that work pays and then providing a completely different experience at Jobs Centre Plus to give every claimant the best advice to succeed. In giving claimants responsibility to pay their housing benefit, allowing claimants to keep the money they have earned and not be penalised by moving from benefits and into work and in and helping them not only enter the workplace but increase their hours and opportunities, Universal Credit is bringing a culture shift. I have taken plenty of positives away from my day with the DWP and Job Centre Plus teams but the biggest plus for me is the role of the Jobs Coaches, and the attitude of those I meet. These individuals have seen both systems in practice. The Job Coaches I have met feel that Universal Credit gives them more discretion and a wider range of tools to help individuals succeed. Their very passion for the potential of Universal Credit makes me determined to support it and to help address the residual challenges rather than allow these to undermine a seismic shift in the way in which we help people to succeed in life.