Supporting Ukraine and the Ukrainian people 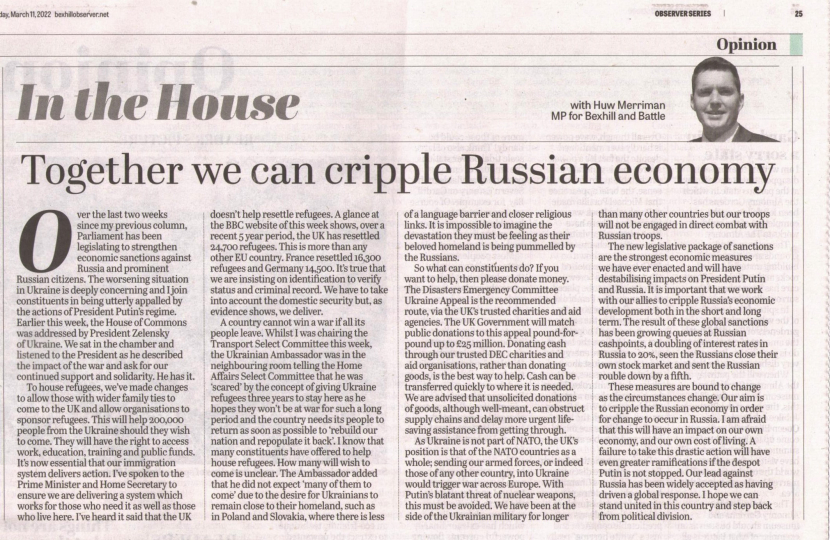 Over the last two weeks since my previous column, Parliament has been legislating to strengthen economic sanctions against Russia and prominent Russian citizens. This has involved some late sittings but it’s right we take impactful action.

The worsening situation in Ukraine is deeply concerning and I join constituents in being utterly appalled by the actions of President Putin’s regime. Earlier this week, the House of Commons was addressed by President Zelensky of Ukraine. Normally, Heads of State address MPs and Peers in person from one of the state rooms or from Westminster Hall. With help from technology used during COVID lockdown, we were able to sit in the chamber and listen to the President as he described, with the help of an interpreter, the impact of the war and ask for our continued support and solidarity. He has it.

To house refugees, we’ve made changes to allow those with wider family ties to come to the UK and to allow organisations to sponsor refugees. There are no salary or language requirements. This will help 200,000 people from the Ukraine should they wish to come. They will have the right to access work, education, training and public funds. It’s now essential that our immigration system delivers action. I’ve spoken to the Prime Minister and Home Secretary to ensure we are delivering a system which works for those who need it as well as those who live here. I’ve heard it said that the UK doesn’t help resettle refugees. A glance at the BBC website of this week shows, over a recent 5 year period, the UK has resettled 24,700 refugees. This is more than any other EU country. France resettled 16,300 refugees and Germany 14,500. It’s true that we are insisting on identification to verify status and criminal record. We have to take into account the domestic security but, as evidence shows, we deliver.

A country cannot win a war if all its people leave. Whilst I was chairing the Transport Select Committee this week, the Ukrainian Ambassador was in the neighbouring room telling the Home Affairs Select Committee that he was ‘scared’ by the concept of giving Ukraine refugees three years to stay here as he hopes they won’t be at war for such a long period and the country needs its people to return as soon as possible to ‘rebuild our nation and repopulate it back’. I know that many constituents have offered to help house refugees. This is typically kind. How many will wish to come is unclear. The Ambassador added that he did not expect ‘many of them to come’ due to the desire for Ukrainians to remain close to their homeland, such as in Poland and Slovakia, where there is less of a language barrier and closer religious links. If Ukrainians do wish to come, I know we will make them feel welcome and do all we can to help. It is impossible to imagine the devastation they must be feeling as their beloved homeland is being pummelled by the Russians.

So what can constituents do? If you want to help, then please donate money. The Disasters Emergency Committee Ukraine Appeal is the recommended route, via the UK’s trusted charities and aid agencies. The UK Government will match public donations to this appeal pound-for-pound up to £25 million. Donating cash through our trusted DEC charities and aid organisations, rather than donating goods, is the best way to help. Cash can be transferred quickly to where it is needed. We are advised that unsolicited donations of goods, although well-meant, can obstruct supply chains and delay more urgent life-saving assistance from getting through.

As Ukraine is not part of NATO, the UK’s position is that of the NATO countries as a whole; sending our armed forces, or indeed those of any other country, into Ukraine would trigger a war across Europe. With Putin’s blatant threat of nuclear weapons, this must be avoided. We have been at the side of the Ukrainian military for longer than many other countries but our troops will not be engaged in direct combat with Russian troops. Parliament would not sanction it.

The new legislative package of sanctions are the strongest economic measures we have ever enacted and will have destabilising impacts on President Putin and Russia. It is important that we work with our allies to cripple Russia’s economic development both in the short and long term. The result of these global sanctions has been growing queues at Russian cashpoints, a doubling of interest rates in Russia to 20%, seen the Russians close their own stock market and sent the Russian rouble down by a fifth.

These measures are bound to change as the circumstances change. Our aim is to cripple the Russian economy in order for change to occur in Russia. I am afraid that this will have an impact on our own economy, and our own cost of living. A failure to take this drastic action will have even greater ramifications if the despot Putin is not stopped. Our lead against Russia has been widely accepted as having driven a global response. I hope we can stand united in this country and step back from political division.

The situation in Ukraine is deeply concerning and I join constituents in being utterly appalled by the actions of President Putin’s regime and horrified by what is unfolding in Ukraine.

Below you will find an update of the Government’s joined up response to the evolving situation.