My week of work experience by James Jewell 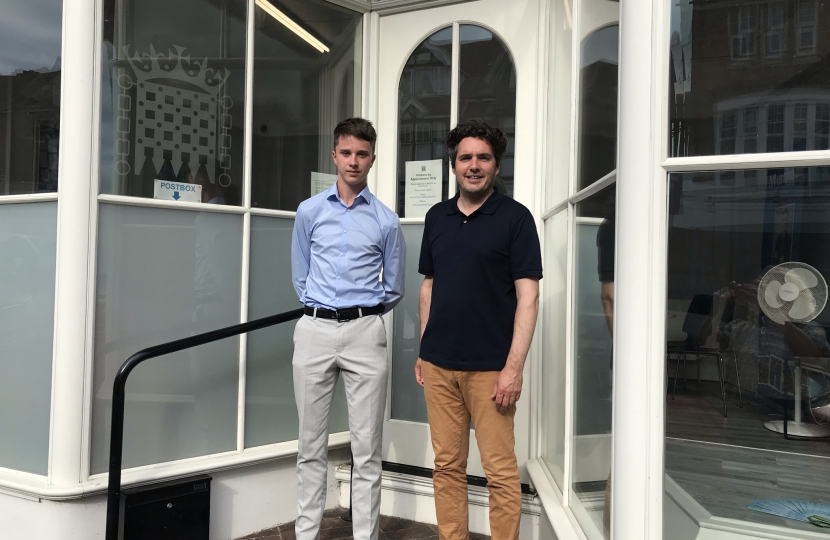 On the week commencing 11th of July, I was offered the opportunity to do a weeklong work experience with Huw and his amazing team.

On the Monday, I was introduced to Craig, who showed me all the ins and outs of what goes on inside the constituency office and the sort of things he has to do on a day-to-day basis. Straight away, I was warmly welcomed and shown how to do certain tasks, such as responding to emails constituents sent in and finding articles that Huw would find of interest.

Then for Tuesday and Wednesday, I was given the opportunity to go to Westminster, which was incredible. Upon arrival, I was introduced to Ella and Joe (members of Huw’s teams who are primarily based in London). Upon arrival, Ella gave me a tour of part of the Parliament estate, including the House of Lords and the House of Commons. This tour was highly informative, and it was incredible to learn about the history and all the events that have occurred in these locations. After the tour, I started on some tasks I had been set. This consisted of a research project for Joe/Huw on driverless cars, policy-related emails etc. On Wednesday, I was lucky enough to sit in a transport select committee meeting where Huw and other members alike grilled the rail union members with regards to striking and the demands the workers want, with the aim of reaching a settlement. However, what I observed, trying to reach such an agreement seems very challenging with the railway unions. In addition to this, I did some more research projects (one on Autism and the new health bill that was passed), and some more administration work. My time in Parliament was an incredible experience I will never forget. While I was there, it was very tense. This is because I did work experience when all the voting for the new Prime Minister was occurring; leading to tensions and uncertainty, so I was incredibly lucky to be able to be in Parliament at one of the most intense times in recent years.

Thursday rolled around and I was back in the constituency office with Frances. For a while, Frances and I spoke about related political issues, and this led to me writing a briefing for Huw on some of the main issues affecting U25s in politics and everyday life. I enjoyed this task as it allowed me to put the views of many of my peers, knowing they will get acknowledged. I then did some data work for the recent jobs fair that happened before I joined for the week.

On Friday, I did constituency work, where I visited negative carbon emissions home which was fascinating, and the blessing of a home for a Ukrainian family. In addition to this, I attended two meetings about current issues in local areas. It was a very busy but unforgettable day.

I am incredibly grateful for the week I was able to have it has really opened my eyes to the world of politics, and I am now adamant I wish to pursue a career of this nature.

Pensioners and those on low incomes must be our priority

Last week, I welcomed Rishi Sunak to the De La Warr Pavilion to meet members of the local Conservative Party and the staff from the Pavilion. It was particularly fitting to host Rishi at the De La Warr.