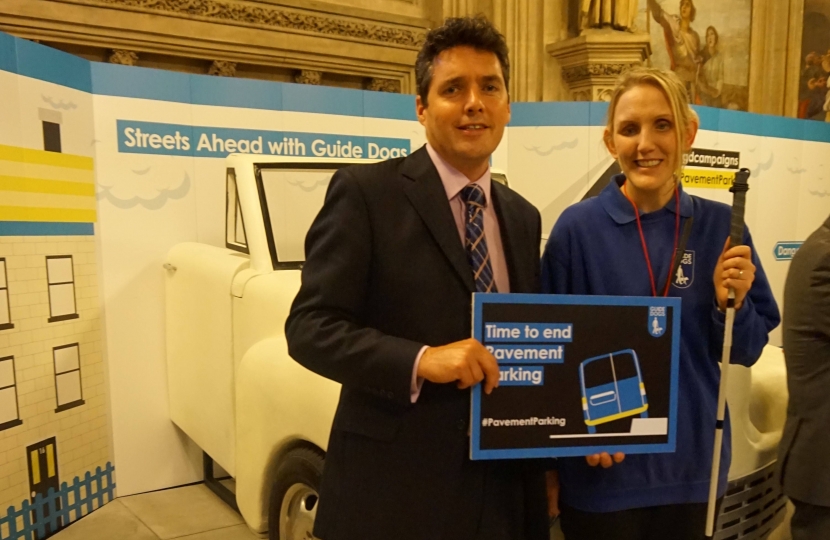 Bexhill and Battle MP, Huw Merriman, has called for Parliament to give more powers to local authorities to tackle anti-social kerb-side parking in town centres.

According to a survey from the charity Guide Dogs, 97% of blind and partially sighted people have encountered obstacles on the pavement. The most common obstacles were cars parked on the pavement: 9 out of 10 have had problems with pavement parking.

Having last year experienced the challenges of a pedestrian when taking to the streets with a blindfold and a guide dog, the MP was joined in Parliament by representatives from Guide Dogs to discuss the campaign to address the challenges that people with sight loss face when walking the streets. He then called in Parliament for the Government to make pavement parking an offence, except on streets where local authorities agree that it is safe for pedestrians. This is already the case in London, but elsewhere across the country, councils struggle to tackle unsafe pavement parking.

Speaking in the House of Commons, the MP said ‘Mr Speaker, I know you have been a great supporter of Guide Dogs. Members will have seen its stand just off the Committee Corridor recently. Its big campaign is to try to make kerb parking illegal, as it is and has been in London since 1974. I know the roads Minister is looking at this issue, but perhaps a debate in Government time might persuade the Minister that it is about time those powers were extended outside London’. The Leader of the House of Commons, Andrea Leadsom, who is responsible for scheduling new legislation responded by saying ‘He is absolutely right that the big problem of pavement parking causes real challenges for people with visual impairments. I certainly encourage him, if he did not already raise this at Transport questions today, to raise it directly with Ministers, perhaps through an Adjournment debate.’

Speaking after his intervention, the MP said ‘Through my work on the Transport Select Committee, and my experience with the appalling parking situation in our constituency towns, I have called for new powers to clamp down on inconsiderate pavement parking. With East Sussex County Council due to take over the enforcement of high street parking from the police by 2019, it would be timely to give them even more powers and help those with mobility issues to access our streets safely.’

James White, Senior Campaigns Manager at Guide Dogs, commented ‘Too often, our streets can be cluttered with dangerous obstacles for blind and partially sighted people. The worst offenders are cars parked on the pavement. If you have a vision impairment, pavement parked cars aren’t just a nuisance, they can force you to step out into the road and put you in real danger. Outside London, the law on pavement parking is unclear and difficult to enforce. We want pavement parking to be the exception so pedestrians can rely on their path being clear. When drivers themselves don’t know the rules, that is a strong sign the law needs to change.

The MP intends to use a forthcoming inquiry by his Transport Select Committee on pedestrian safety to take forward his campaign and persuade the Government to extend these powers beyond London.