Covid laws must be proportionate and fair 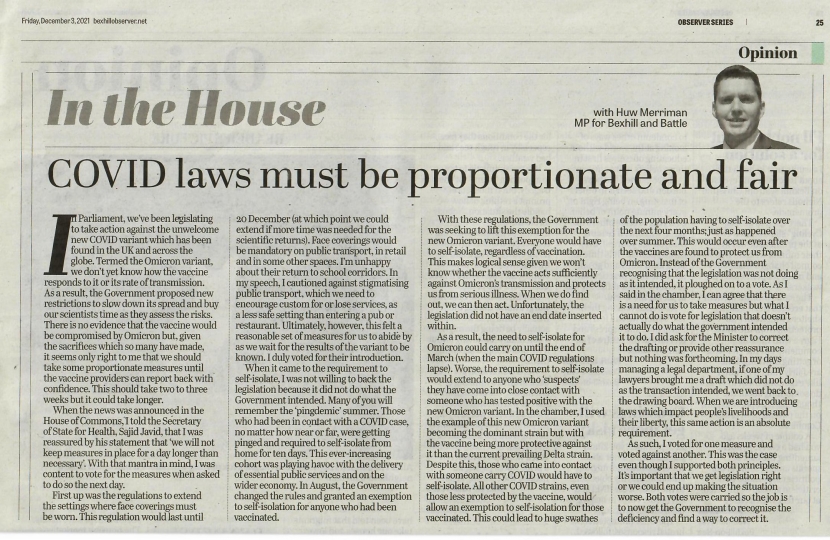 In Parliament, we’ve been legislating to take action against the unwelcome new COVID variant which has been found in the UK and across the globe. Termed the Omicron variant, we don’t yet know how the vaccine responds to it or its rate of transmission. As a result, the Government proposed new restrictions to slow down its spread and buy our scientists time as they assess the risks. There is no evidence that the vaccine would be compromised by Omicron but, given the sacrifices which so many have made, it seems only right to me that we should take some proportionate measures until the vaccine providers can report back with confidence. This should take two to three weeks but it could take longer.

When the news was announced in the House of Commons, I told the Secretary of State for Health, Sajid Javid, that I was reassured by his statement that ‘we will not keep measures in place for a day longer than necessary’. With that mantra in mind, I was content to vote for the measures when asked to do so the next day.

First up was the regulations to extend the settings where face coverings must be worn. This regulation would last until 20 December (at which point we could extend if more time was needed for the scientific returns). Face coverings would be mandatory on public transport, in retail and in some other spaces. I’m unhappy about their return to school corridors. In my speech, I cautioned against stigmatising public transport, which we need to encourage custom for or lose services, as a less safe setting than entering a pub or restaurant. Ultimately, however, this felt a reasonable set of measures for us to abide by as we wait for the results of the variant to be known. I duly voted for their introduction.

When it came to the requirement to self-isolate, I was not willing to back the legislation because it did not do what the Government intended. Many of you will remember the ‘pingdemic’ summer. Those who had been in contact with a COVID case, no matter how near or far, were getting pinged and required to self-isolate from home for ten days. This ever-increasing cohort was playing havoc with the delivery of essential public services and on the wider economy. In August, the Government changed the rules and granted an exemption to self-isolation for anyone who had been vaccinated.

With these regulations, the Government was seeking to lift this exemption for the new Omicron variant. Everyone would have to self-isolate, regardless of vaccination. This makes logical sense given we won’t know whether the vaccine acts sufficiently against Omicron’s transmission and protects us from serious illness. When we do find out, we can then act. Unfortunately, the legislation did not have an end date inserted within.

As a result, the need to self-isolate for Omicron could carry on until the end of March (when the main COVID regulations lapse). Worse, the requirement to self-isolate would extend to anyone who ‘suspects’ they have come into close contact with someone who has tested positive with the new Omicron variant. In the chamber, I used the example of this new Omicron variant becoming the dominant strain but with the vaccine being more protective against it than the current prevailing Delta strain. Despite this, those who came into contact with someone carry COVID would have to self-isolate. All other COVID strains, even those less protected by the vaccine, would allow an exemption to self-isolation for those vaccinated. This could lead to huge swathes of the population having to self-isolate over the next four months; just as happened over summer. This would occur even after the vaccines are found to protect us from Omicron. Instead of the Government recognising that the legislation was not doing as it intended, it ploughed on to a vote. As I said in the chamber, I can agree that there is a need for us to take measures but what I cannot do is vote for legislation that doesn’t actually do what the government intended it to do.

I did ask for the Minister to correct the drafting or provide other reassurance but nothing was forthcoming. In my days managing a legal department, if one of my lawyers brought me a draft which did not do as the transaction intended, we went back to the drawing board. When we are introducing laws which impact people’s livelihoods and their liberty, this same action is an absolute requirement.

As such, I voted for one measure and voted against another. This was the case even though I supported both principles. It’s important that we get legislation right or we could end up making the situation worse. Both votes were carried so the job is to now get the Government to recognise the deficiency and find a way to correct it.