Both election candidates are good but Rishi gets my backing 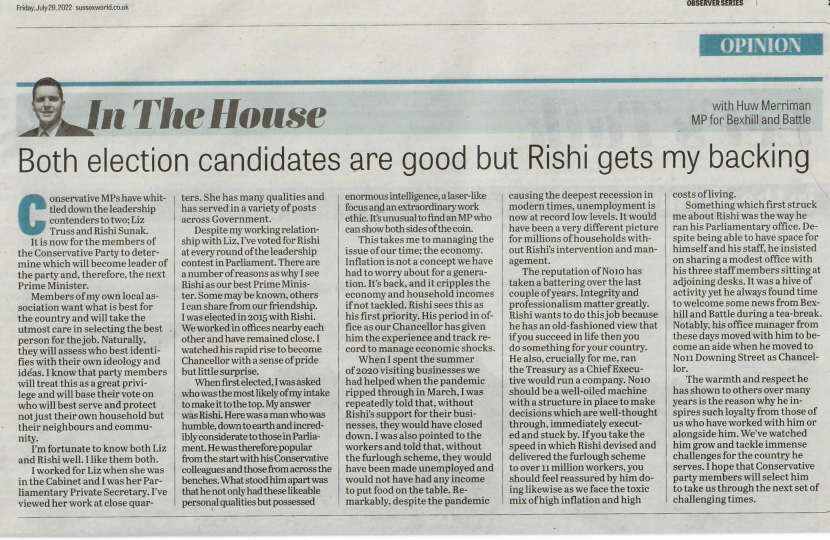 Conservative MPs have whittled down the leadership contenders to two; Liz Truss and Rishi Sunak. It is now for the members of the Conservative Party to determine which will become leader of the party and, therefore, the next Prime Minister.

Members of my own local Association want what is best for the country and will take the utmost care in selecting the best person for the job. Naturally, they will assess who best identifies with their own ideology and ideas. I know that Party members will treat this as a great privilege and will base their vote on who will best serve and protect not just their own household but their neighbours and community.

I’m fortunate to know both Liz and Rishi well. I like them both.

I worked for Liz when she was in the Cabinet and I was her Parliamentary Private Secretary. I’ve viewed her work at close quarters. She has many qualities and has served in a variety of posts across Government.

Despite my working relationship with Liz, I’ve voted for Rishi at every round of the leadership contest in Parliament. There are a number of reasons as why I see Rishi as our best Prime Minister. Some may be known, others I can share from our friendship. I was elected in 2015 with Rishi. We worked in offices nearby each other and have remained close. I watched his rapid rise to become Chancellor with a sense of pride but little surprise.

When first elected, I was asked who was the most likely of my intake to make it to the top. My answer was Rishi. Here was a man who was humble, down to earth and incredibly considerate to those in Parliament. He was therefore popular from the start with his Conservative colleagues and those from across the benches. What stood him apart was that he not only had these likeable personal qualities but possessed enormous intelligence, a laser-like focus and an extraordinary work ethic. It’s unusual to find an MP who can show both sides of the coin.

This takes me to managing the issue of our time; the economy. Inflation is not a concept we have had to worry about for a generation. It’s back, and it cripples the economy and household incomes if not tackled. Rishi sees this as his first priority. His period in office as our Chancellor has given him the experience and track record to manage economic shocks.

When I spent the summer of 2020 visiting businesses we had helped when the pandemic ripped through in March, I was repeatedly told that, without Rishi’s support for their businesses, they would have closed down. I was also pointed to the workers and told that, without the furlough scheme, they would have been made unemployed and would not have had any income to put food on the table. Remarkably, despite the pandemic causing the deepest recession in modern times, unemployment is now at record low levels. It would have been a very different picture for millions of households without Rishi’s intervention and management.

The reputation of No10 has taken a battering over the last couple of years. Integrity and professionalism matter greatly. Rishi wants to do this job because he has an old-fashioned view that if you succeed in life then you do something for your country. He also, crucially for me, ran the Treasury as a Chief Executive would run a company. No10 should be a well-oiled machine with a structure in place to make decisions which are well-thought through, immediately executed and stuck by. If you take the speed in which Rishi devised and delivered the furlough scheme to over 11 million workers, you should feel reassured by him doing likewise as we face the toxic mix of high inflation and high costs of living.

Something which first struck me about Rishi was the way he ran his Parliamentary office. Despite being able to have space for himself and his staff, he insisted on sharing a modest office with his three staff members sitting at adjoining desks. It was a hive of activity yet he always found time to welcome some news from Bexhill and Battle during a tea-break. Notably, his office manager from these days moved with him to become an aide when he moved to No11 Downing Street as Chancellor.

The warmth and respect he has shown to others over many years is the reason why he inspires such loyalty from those of us who have worked with him or alongside him. We’ve watched him grow and tackle immense challenges for the country he serves. I hope that Conservative party members will select him to take us through the next set of challenging times.

Pensioners and those on low incomes must be our priority

Last week, I welcomed Rishi Sunak to the De La Warr Pavilion to meet members of the local Conservative Party and the staff from the Pavilion. It was particularly fitting to host Rishi at the De La Warr.