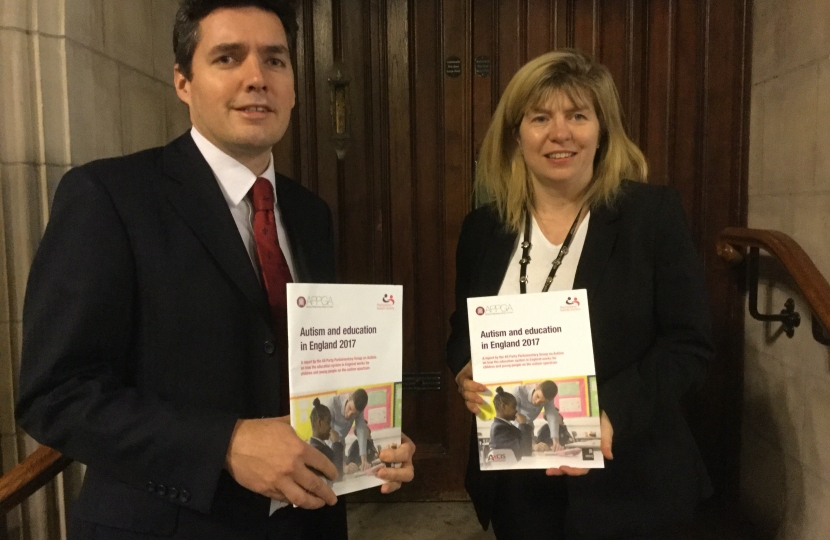 Sussex MPs, Maria Caulfield and Huw Merriman, have published their national report on the provision of education for children with autism. The report, entitled, 'Autism and Education in England' follows a Parliamentary inquiry by the All Party Parliamentary Group for Autism and evidence sessions which the two MPs chaired during the course of the year.

The report concludes that the education system is still failing to meet the needs of autistic children, three years after the Government introduced a new special educational needs and disability (SEND) system in England with an objective to make it easier for children and their families to get support.

A survey conducted as part of the inquiry heard from over 3,000 parents, carers, young people and teachers. Expert witness evidence was taken in Parliament and the inquiry was supported by leading charities, the National Autistic Society and Ambitious About Autism, and the Institute of Education at University College London.

Maria Caulfield, MP for Lewes, said “I have had many constituents come to me in desperate need of help because their child is not getting the right education, where their autism is a cause of this. I was very keen to work with the National Autistic Society and Huw to look into this issue. During the course of this inquiry, we heard that many children on the autism spectrum are being failed in various ways by the education system. We urge the Government to look carefully at our report and develop a national autism and education strategy so that every autistic child is supported to make the most of their talents and reach their potential. I hope that the report will really highlight the short comings in education for those with autism and entice the Government to take meaningful action.”

Huw Merriman, MP for Bexhill and Battle, said “As MPs, Maria and I always try and help families when they encounter difficulties and feel the system has failed their child. However, many of these challenges need the entire education system to be reformed so it sets autistic children up to succeed. This is what our inquiry and report seeks to do. One in a hundred pupils are on the autistic spectrum and 70% are in mainstream schools. Our report calls for all teachers to be trained for autism, for Ofsted to have increased inspection powers and to report to Parliament, for local authorities to share best practice and the tribunal and exclusion system to be overhauled. We hope the Government will accept our findings in the new year and we can start making a difference."