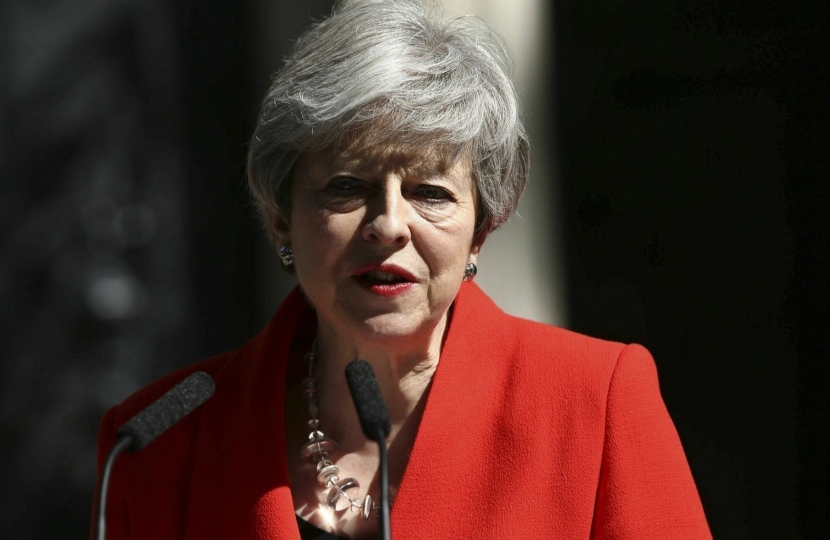 Today the Prime Minister has announced that she will step down on 7 June.

I am personally very sorry that Theresa May’s premiership has ended in this manner. I found it uncomfortable viewing as she explained how much she valued serving her country and how sorry she was to be leaving a job she had loved. You will all have varying views but I admired her determination, dedication to public service and desire to protect our Union. I do not hold her responsible for failing to deliver Brexit. Like me, she voted three times to leave the European Union. If more of the other members of Parliament, had done likewise then we would be out by now rather than having a leadership contest which the public may find self-indulgent.

We now move to a leadership contest which, will lead to a new Prime Minister, and leader of the Conservative Party, to be in post by the end of July. I would imagine that this will be conducted in two phases.

The first phase, which will begin shortly after the 7 June, will see Conservative MPs whittle the number of contenders down to the final two. Given that there seem to be more runners than the Grand National, this may require a few rounds. I would imagine this phase will be completed during the remainder of June.

The second phase will see the final two leadership candidates put to rest of the Conservative Party members, who will decide on the new leader. I would imagine that this second phase will take place during the first few weeks of July, where hustings will surely take place.

I will meet with leadership contenders. I will want to ask them what they will do to deliver Brexit and to deliver the other policies which will help to boost the Conservative Party and the country. I will report back.

This link to my Bexhill and Battle Observer column for this week talks about the process for putting down the Withdrawal Bill as legislation and rather anticipated the events of today. I type this in a break during a busy constituency day. Shortly, I am about to host a summit which I have devised to tackle Homelessness in the area. None of this high drama has impacted the work we do in Parliament or locally. It strikes me as important to show that it is business as usual, during a time when the voters may be looking less favourably at the Conservative Party.