End-game for our Prime Minister but still no Brexit 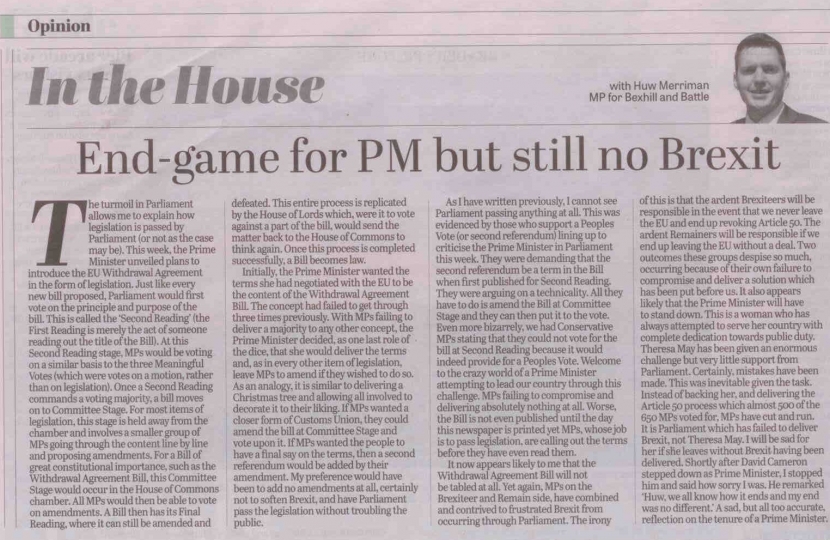 The turmoil in Parliament allows me to explain how legislation is passed by Parliament (or not as the case may be). This week, the Prime Minister unveiled plans to introduce the EU Withdrawal Agreement in the form of legislation. Just like every new bill proposed, Parliament would first vote on the principle and purpose of the bill. This is called the ‘Second Reading’ (the First Reading is merely the act of someone reading out the title of the Bill). At this Second Reading stage, MPs would be voting on a similar basis to the three Meaningful Votes (which were votes on a motion, rather than on legislation). Once a Second Reading commands a voting majority, a bill moves on to Committee Stage. For most items of legislation, this stage is held away from the chamber and involves a smaller group of MPs going through the content line by line and proposing amendments. For a Bill of great constitutional importance, such as the Withdrawal Agreement Bill, this Committee Stage would occur in the House of Commons chamber. All MPs would then be able to vote on amendments. A Bill then has its Final Reading, where it can still be amended and defeated. This entire process is replicated by the House of Lords which, were it to vote against a part of the bill, would send the matter back to the House of Commons to think again. Once this process is completed successfully, a Bill becomes law.

Initially, the Prime Minister wanted the terms she had negotiated with the EU to be the content of the Withdrawal Agreement Bill. The concept had failed to get through three times previously. With MPs failing to deliver a majority to any other concept, the Prime Minister decided, as one last role of the dice, that she would deliver the terms and, as in every other item of legislation, leave MPs to amend if they wished to do so. As an analogy, it is similar to delivering a Christmas tree and allowing all involved to decorate it to their liking. If MPs wanted a closer form of Customs Union, they could amend the bill at Committee Stage and vote upon it. If MPs wanted the people to have a final say on the terms, then a second referendum would be added by their amendment. My preference would have been to add no amendments at all, certainly not to soften Brexit, and have Parliament pass the legislation without troubling the public.

As I have written previously, I cannot see Parliament passing anything at all. This was evidenced by those who support a Peoples Vote (or second referendum) lining up to criticise the Prime Minister in Parliament this week. They were demanding that the second referendum be a term in the Bill when first published for Second Reading. They were arguing on a technicality. All they have to do is amend the Bill at Committee Stage and they can then put it to the vote. Even more bizarrely, we had Conservative MPs stating that they could not vote for the bill at Second Reading because it would indeed provide for a Peoples Vote. Welcome to the crazy world of a Prime Minister attempting to lead our country through this challenge. MPs failing to compromise and delivering absolutely nothing at all. Worse, the Bill is not even published until the day this newspaper is printed yet MPs, whose job is to pass legislation, are calling out the terms before they have even read them.

It now appears likely to me that the Withdrawal Agreement Bill will not be tabled at all. Yet again, MPs on the Brexiteer and Remain side, have combined and contrived to frustrated Brexit from occurring through Parliament. The irony of this is that the ardent Brexiteers will be responsible in the event that we never leave the EU and end up revoking Article 50. The ardent Remainers will be responsible if we end up leaving the EU without a deal. Two outcomes these groups despise so much, occurring because of their own failure to compromise and deliver a solution which has been put before us. It also appears likely that the Prime Minister will have to stand down. This is a woman who has always attempted to serve her country with complete dedication towards public duty. Theresa May has been given an enormous challenge but very little support from Parliament. Certainly, mistakes have been made. This was inevitable given the task. Instead of backing her, and delivering the Article 50 process which almost 500 of the 650 MPs voted for, MPs have cut and run. It is Parliament which has failed to deliver Brexit, not Theresa May. I will be sad for her if she leaves without Brexit having been delivered. Shortly after David Cameron stepped down as Prime Minister, I stopped him and said how sorry I was. He remarked ‘Huw, we all know how it ends and my end was no different.’ A sad, but all too accurate, reflection on the tenure of a Prime Minister.