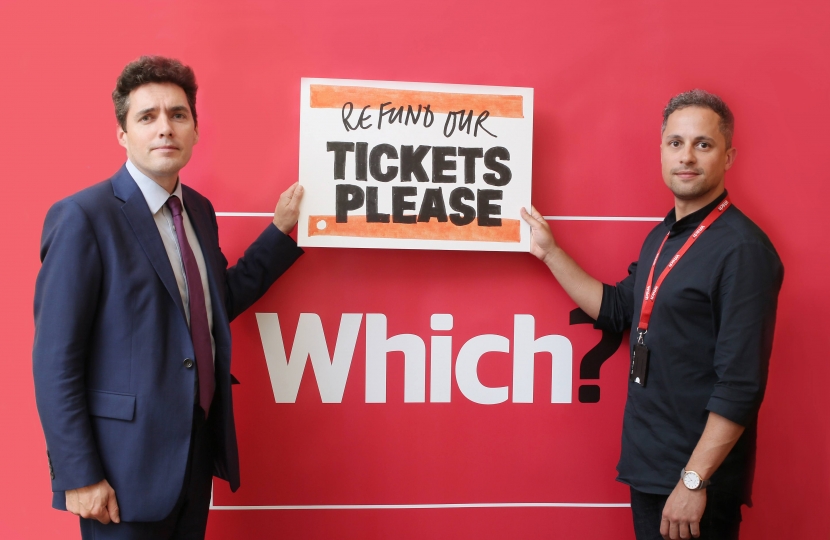 Local MP for Bexhill and Battle, Huw Merriman has written a joint letter with consumer watchdog Which? calling on the independent rail regulator, the Office of Rail and Road (ORR), to bring in automatic compensation for passengers who experience delays or cancellations in their journeys across the rail network.

In a cross-party move, the MP obtained signatures from almost 100 MPs to support his call. The letter urges the ORR to use the forthcoming Williams Rail Review as a vehicle for delivering a simpler and easier compensation process across the network as soon as possible.

The Williams Rail Review, named after its chair Keith Williams, is an independent review into the rail industry and will make recommendations on how rail services can be delivered efficiently and to the benefit of both passengers and taxpayers. Its findings are set to be published later this year.

The letter follows on from a proposed legislation which Mr Merriman tabled last year, calling for the government to bring in an automatic compensation scheme for rail passengers. It comes one year on from last year’s timetabling changes which caused disruption to the personal and professional lives of thousands of passengers.

Research from Which? revealed that passengers lost almost four million hours to significantly delayed train journeys in 2018 with passengers claiming only a third (34%) of journeys where money is owed for delays and cancellations.

Speaking from his office in Westminster, Huw said: “Unprecedented levels of delays and cancellations have left passengers struggling to get to work, school or home on time. That’s why I’ve introduced a law to deliver automatic compensation across the network. Train Operators receive compensation from Network Rail, who cause the lions-share of delays, but passengers are not completing the burdensome compensation process. My law would require the Train Operators to ring-fence the unclaimed sums and invest in technology so that passengers can tap on, and off, the train and then receive the compensation they are due straight to their bank account. The passenger does not even need to be aware of the delay. It is time to take advantage of new technology and deliver for consumers.”

Neena Bhati, Which? Head of Campaigns, said: “Passengers have faced a torrid time on the trains since the beginning of last year where the rail industry has fundamentally failed on punctuality and reliability. People then face a messy and complex compensation system which puts them off claiming when things go wrong. A vital way the government’s rail review and industry can start to restore faith is by introducing automatic compensation for delays and cancellations so that passengers don’t have to fight to get the money they are owed.”