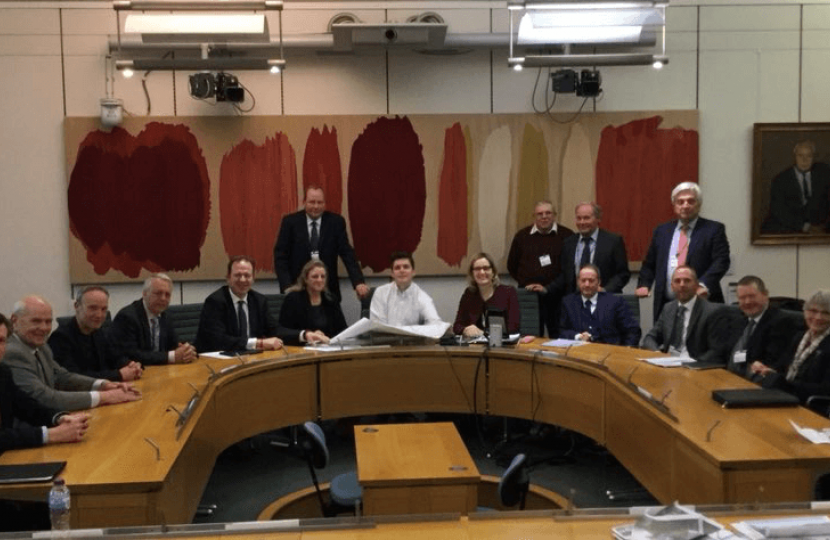 The MPs requested this meeting with the Roads Minister to lobby for urgent improvements to the A21, a key trunk road for their constituencies and one of the most dangerous roads in England.

Last November, a report by the Road Safety Foundation cited the A21 from Hurst Green to Hastings as the most high risk road on England’s strategic road network which is managed by Highways England. Both Huw and Amber took immediate action to bring this to the attention of the Roads Minister and ask for urgent improvement to make the road safer for all road users and the communities that reside along it. Roads Minister, Jesse Norman MP, invited the MPs to bring a delegation of local stakeholders to Parliament so he could hear their concerns first-hand.

All the local representatives had the opportunity to explain to the Minister the problems that their communities’ face. Their concerns included speed and safety issues at Hurst Green CE Primary School and Vinehall School which are both located directly on the A21. Also raised were the junctions at Cripps Corner (A229) and the A265 in Hurst Green and Marley Lane in Battle which are accident blackspots. (Cripps Corner being listed as the highest risk place to have a fatal accident in the Road Safety Foundation Report.) Also highlighted were the accident rates in Whatlington and Westfield villages which regularly close the road.

In addition, representatives from Rother District Council, East Sussex County Council, the South East Local Enterprise Partnership and Hastings Borough Council impressed upon the Minister the importance of the A21 as a key strategic road for East Sussex. Improving the road is key to bringing economic growth, investment and regeneration to the area. The Councils and the LEP confirmed that they had prioritised the A21 in their recent responses to the Government’s Road Investment Strategy (RIS 2) consultation led by the consortium Transport for the South East.

The Minister listened carefully to the delegations’ concerns and confirmed that the A21 had been strongly backed in responses to the RIS 2 consultation. He told the delegates that the Government would announce their objectives for RIS 2 this summer but specific projects for road investment would be not be published until the middle of 2019. The Minister assured the delegates that he would be consulting with Highways England about more immediate road safety measures for the A21.

Following the meeting, Huw Merriman, MP for Bexhill and Battle, said “I am grateful to the Roads Minister for welcoming our delegation to Parliament to hear our concerns first-hand. It was very encouraging to hear that he understood the importance of the A21 to our constituencies and to the communities that live along it. Both Amber and I are very grateful to the local representatives who travelled to London to take part in the meeting, I believe that their personal contributions really helped to explain our concerns about the A21 and the need for improvements. Both Amber and I will continue to work with colleagues to ensure that the A21 remains a high priority for future government investment and to ensure that further safety measures are implemented as quickly as possible.”

Amber Rudd, MP for Hastings and Rye, said “It was fantastic to meet with Jesse Norman and many of our local representatives from East Sussex to discuss the plans for the A21. I am pleased that so many of our local representatives took the time to come to London to meet with the Roads Minister. I am delighted that Jesse came to listen to the concerns of our constituencies and to gain an understanding of just how important it is for our residents to work towards improving the A21. I will continue working closely with Huw to ensure that we get the safest roads for our towns.”