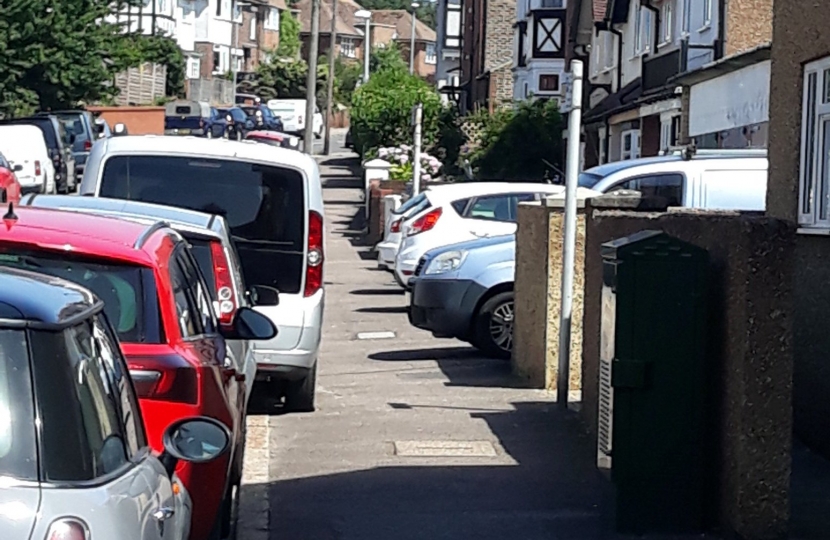 Bexhill MP, Huw Merriman, has welcomed a call from Parliament’s Transport Select Committee to end the current parking chaos in Bexhill and across parts of Rother. The recommendation was part of a wide-ranging report urging the Government to act to stop anti-social parking.

Huw Merriman, a member of the Transport Select Committee, invited the cross-party group of MPs to visit Bexhill as part of their inquiry and evidence gathering.  Huw wanted to use Bexhill as an example of where pavement parking causes immense difficulty for people with a wide range mobility issues and pushchairs. The MPs met with impacted residents from across East Sussex. During their visit, the MPs were shocked to observe not only pavement parking but general parking chaos which the Chair of the Select Committee, Lilian Greenwood MP, called the “Wild West of Parking” when speaking in Parliament.

The Committee’s report which will now go to the government for response calls for a nationwide ban on pavement parking, with exceptions for suitable residential streets, in line with parking policy which has existed since 1974 for London.  The report also calls for applications to transfer parking enforcement from the police to local authorities, one of which applies to Rother, to be dealt with as a matter of priority.

Lillian Greenwood MP, Chair of the Transport Select Committee, said “Pavement parking has a huge impact on people's lives and their ability get around their communities.  Motorists may feel they have no choice but to park on the pavement and many try to do so in a considerate way, but evidence to our inquiry revealed the impact on those with visual and mobility impairments and people with children.

“In the long-term we believe the Government should ban pavement parking across England—as is already the case in London. Local authorities could create exemptions if they choose to do so, but drivers would know that unless it was expressly permitted it was illegal to park their car on the pavement.”

Huw Merriman MP said “The inquiry into pavement parking is of critical local interest to me due the lack of any parking enforcement in the towns of Bexhill and Battle. This has resulted in some hugely inconsiderate and dangerous parking which the Transport Select Committee witnessed during their visit to Bexhill in July.  On that day we saw parking across pavements and driveways, illegal parking in disabled bays and loading bays, vans parked across the lowered curbs and cars parked in the middle of the road. All of this causes great difficulty and risks for able-bodied residents but especially those with mobility issues or young children. Our report calls for pavement parking to be banned across England to ensure that the rights of pedestrians to use our streets safely are protected. Where necessary for access, pavement parking can be tightly regulated based on local requirements.

“The report also recommends that areas like Rother which want to introduce civil parking enforcement to deal with anti-social parking behaviour, such as pavement parking, are dealt with immediately by the Department for Transport. I have written to the Roads Minister to highlight this recommendation to ensure that we get traffic wardens in the towns and villages across Rother. I hope to see parking law and order restored to our streets in the first half of next year.”