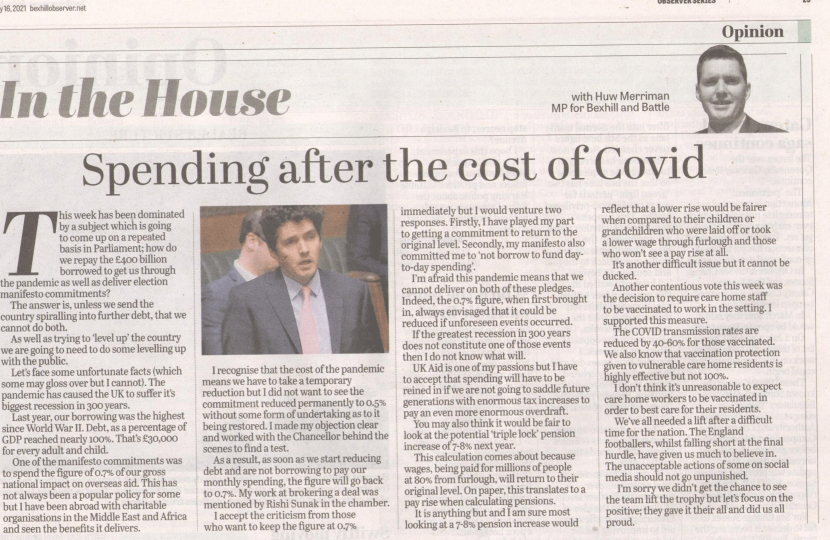 This week has been dominated by a subject which is going to come up on a repeated basis in Parliament; how do we repay the £400 billion borrowed to get us through the pandemic as well as deliver election manifesto commitments? The answer is, unless we send the country spiralling into further debt, that we cannot do both. As well as trying to ‘level up’ the country we are going to need to do some levelling up with the public.

Let’s face some unfortunate facts (which some may gloss over but I cannot). The pandemic has caused the UK to suffer it’s biggest recession in 300 years. Last year, our borrowing was the highest since World War II. Debt, as a percentage of GDP reached nearly 100%. That’s £30,000 for every adult and child.

One of the manifesto commitments was to spend the figure of 0.7% of our gross national impact on overseas aid. This has not always been a popular policy for some but I have been abroad with charitable organisations in the Middle East and Africa and seen the benefits it delivers. I recognise that the cost of the pandemic means we have to take a temporary reduction but I did not want to see the commitment reduced permanently to 0.5% without some form of undertaking as to it being restored. I made my objection clear and worked with the Chancellor behind the scenes to find a test. As a result, as soon as we start reducing debt and are not borrowing to pay our monthly spending, the figure will go back to 0.7%. My work at brokering a deal was mentioned by Rishi Sunak in the chamber.

I accept the criticism from those who want to keep the figure at 0.7% immediately but I would venture two responses. Firstly, I have played my part to getting a commitment to return to the original level. Secondly, my manifesto also committed me to ‘not borrow to fund day-to-day spending’. I’m afraid this pandemic means that we cannot deliver on both of these pledges. Indeed, the 0.7% figure, when first brought in, always envisaged that it could be reduced if unforeseen events occurred. If the greatest recession in 300 years does not constitute one of those events then I do not know what will.

UK Aid is one of my passions but I have to accept that spending will have to be reined in if we are not going to saddle future generations with enormous tax increases to pay an even more enormous overdraft. You may also think it would be fair to look at the potential ‘triple lock’ pension increase of 7-8% next year. This calculation comes about because wages, being paid for millions of people at 80% from furlough, will return to their original level. On paper, this translates to a pay rise when calculating pensions. It is anything but and I am sure most looking at a 7-8% pension increase would reflect that a lower rise would be fairer when compared to their children or grandchildren who were laid off or took a lower wage through furlough and those who won’t see a pay rise at all. It’s another difficult issue but it cannot be ducked.

Another contentious vote this week was the decision to require care home staff to be vaccinated to work in the setting. I supported this measure. The COVID transmission rates are reduced by 40-60% for those vaccinated. We also know that vaccination protection given to vulnerable care home residents is highly effective but not 100%. I don’t think it’s unreasonable to expect care home workers to be vaccinated in order to best care for their residents.

We’ve all needed a lift after a difficult time for the nation. The England footballers, whilst falling short at the final hurdle, have given us much to believe in. The unacceptable actions of some on social media should not go unpunished. I’m sorry we didn’t get the chance to see the team lift the trophy but let’s focus on the positive; they gave it their all and did us all proud.

This week, I have been privileged to have the opportunity to do work experience in Huw Merriman’s constituency office, Bexhill where I learnt about the role of an MP and was able to assist Huw and his team in their work.