FIghting for funds for families and schools 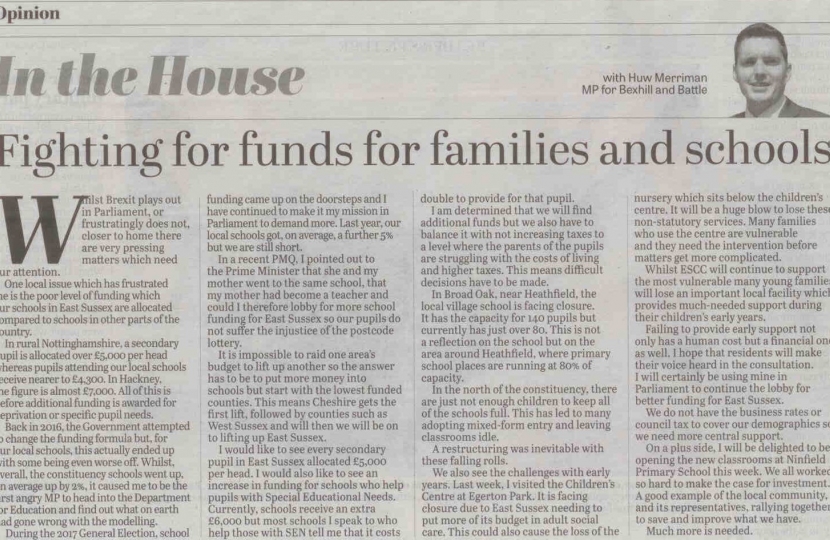 Whilst Brexit plays out in Parliament, or frustratingly does not, closer to home there are very pressing matters which need our attention. One local issue which has frustrated me is the poor level of funding which our schools in East Sussex are allocated compared to schools in other parts of the country. In rural Nottinghamshire, a secondary pupil is allocated over £5,000 per head whereas pupils attending our local schools receive nearer to £4,300. In Hackney, the figure is almost £7,000. All of this is before additional funding is awarded for deprivation or specific pupil needs. Back in 2016, the Government attempted to change the funding formula but, for our local schools, this actually ended up with some being even worse off. Whilst, overall, the constituency schools went up, on average up by 2%, it caused me to be the first angry MP to head into the Department for Education and find out what on earth had gone wrong with the modelling. During the 2017 General Election, school funding came up on the doorsteps and I have continued to make it my mission in Parliament to demand more. Last year, our local schools got, on average, a further 5% but we are still short.

In a recent PMQ, I pointed out to the Prime Minister that she and my mother went to the same school, that my mother had become a teacher and could I therefore lobby for more school funding for East Sussex so our pupils do not suffer the injustice of the postcode lottery. It is impossible to raid one area’s budget to lift up another so the answer has to be to put more money into schools but start with the lowest funded counties. This means Cheshire gets the first lift, followed by counties such as West Sussex and will then we will be on to lifting up East Sussex. I would like to see every secondary pupil in East Sussex allocated £5,000 per head. I would also like to see an increase in funding for schools who help pupils with Special Educational Needs. Currently, schools receive an extra £6,000 but most schools I speak to who help those with SEN tell me that it costs double to provide for that pupil.

I am determined that we will find additional funds but we also have to balance it with not increasing taxes to a level where the parents of the pupils are struggling with the costs of living and higher taxes. This means difficult decisions have to be made. In Broad Oak, near Heathfield, the local village school is facing closure. It has the capacity for 140 pupils but currently has just over 80. This is not a reflection on the school but on the area around Heathfield, where primary school places are running at 80% of capacity. In the north of the constituency, there are just not enough children to keep all of the schools full. This has led to many adopting mixed-form entry and leaving classrooms idle. A restructuring was inevitable with these falling rolls.

We also see the challenges with early years. Last week, I visited the Children’s Centre at Egerton Park. It is facing closure due to East Sussex needing to put more of its budget in adult social care. This could also cause the loss of the nursery which sits below the children’s centre. It will be a huge blow to lose these non-statutory services. Many families who use the centre are vulnerable and they need the intervention before matters get more complicated. Whilst ESCC will continue to support the most vulnerable many young families will lose an important local facility which provides much-needed support during their children’s early years. Failing to provide early support not only has a human cost but a financial one as well. I hope that residents will make their voice heard in the consultation. I will certainly be using mine in Parliament to continue the lobby for better funding for East Sussex. We do not have the business rates or council tax to cover our demographics so we need more central support.

On a plus side, I will be delighted to be opening the new classrooms at Ninfield Primary School this week. We all worked so hard to make the case for investment. A good example of the local community, and its representatives, rallying together to save and improve what we have. Much more is needed.