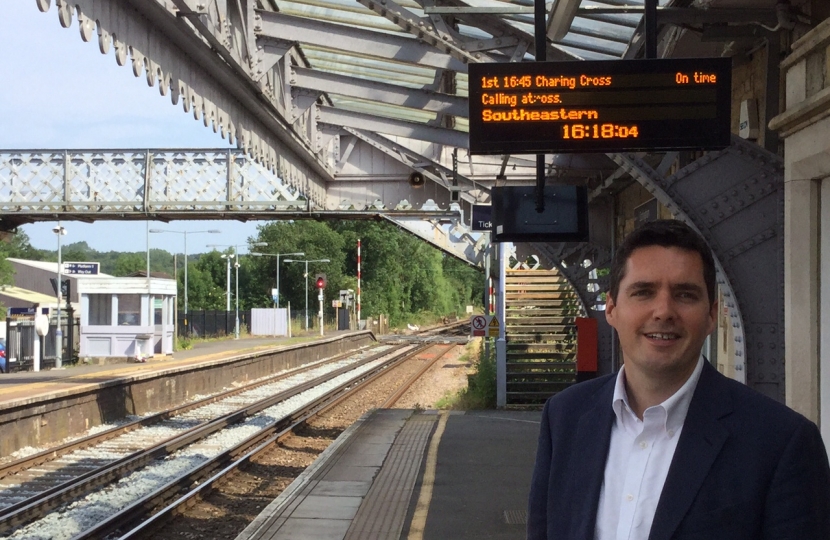 The Department for Transport has today (Wednesday 29 November) published the Invitation To Tender (ITT) for the next South Eastern Franchise. The document set out a plan for high quality, frequent and reliable services, for a railway which is fit for the future and which ensures that South Eastern rail services contribute towards supporting economic growth and opportunity.

The document sets out how faster services will operate between London and Hastings, Rye, Bexhill and Battle. The ITT also explicitly encourages bidders for the next franchise to put forward ambitious and innovative proposals to deliver High Speed services between London St Pancras, Rye, Hastings and Bexhill.

Local MPs Amber Rudd and Huw Merriman have welcomed today’s announcement and what it means for their constituents.

Amber said: “Since my first term as your MP it has been my goal to secure high speed rail services for our towns. They will bring incredible benefits to our communities and open up fantastic new opportunities for local people.

“We are now taking major steps towards delivering this. Last month the Department for Transport committed to examining the changes to the track layout at Ashford International to make possible direct journeys to London St Pancras. This ITT now encourages the franchise operator to run the service after these changes have been made.

“Ahead of this we will also see faster, better and more reliable services to London on the Hastings mainline. This is a plan for future rail services which will deliver real benefits to local passengers and our towns.”

Huw said: “I am delighted to see that the new franchise document for South Eastern services reflects our local aspiration for Hastings, Rye and Bexhill - that is a new high speed rail service to London and Ashford. This project is something that my colleague Amber Rudd and I have been enthusiastically working towards with local stakeholders, and which she has led, for a number of years. The new franchise also commits to deliver faster trains from Battle and surrounding stations on the existing route to London with less station stops in Kent.  In addition, for our rural communities, we have the guarantees we asked for that the rural stations will continue to receive at least one service per hour.

“I was encouraged that the reply from the Secretary of State for Transport, in Parliament today, indicated that track changes would be made at Ashford to implement the first stage of bringing High Speed Rail to both Constituencies indicating that this project is ready to make progress.”

To improve journey times on the Hastings mainline between London and Battle, St Leonards and Hastings, services will no longer call at Orpington, Sevenoaks or Hildenborough, and bidders will be incentivised to develop innovative proposals for further reducing journey times on Main Line services including peak Hastings services.

It was also announced that potential bidders would be expected to deliver improvements in:

·        Longer trains as well as upgrading or replacing older trains

The winning bidder is expected to be announced in Autumn 2018, with the new franchise scheduled to commence in April 2019 and to operate for approximately 8 years.

The following documents have been published by the Department for Transport: