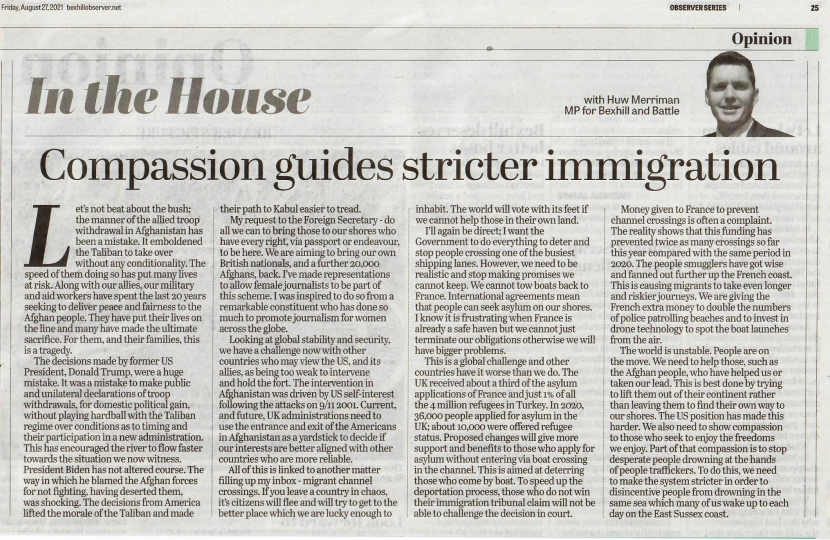 Let’s not beat about the bush; the manner of the allied troop withdrawal in Afghanistan has been a mistake. It emboldened the Taliban to take over without any conditionality. The speed of them doing so has put many lives at risk. Along with our allies, our military and aid workers have spent the last 20 years seeking to deliver peace and fairness to the Afghan people. They have put their lives on the line and many have made the ultimate sacrifice. For them, and their families, this is a tragedy.

The decisions made by former US President, Donald Trump, were a huge mistake. It was a mistake to make public and unilateral declarations of troop withdrawals, for domestic political gain, without playing hardball with the Taliban regime over conditions as to timing and their participation in a new administration. This has encouraged the river to flow faster towards the situation we now witness. President Biden has not altered course. The way in which he blamed the Afghan forces for not fighting, having deserted them, was shocking. The decisions from America lifted the morale of the Taliban and made their path to Kabul easier to tread.

My request to the Foreign Secretary - do all we can to bring those to our shores who have every right, via passport or endeavour, to be here. We are aiming to bring our own British nationals, and a further 20,000 Afghans, back. I’ve made representations to allow female journalists to be part of this scheme. I was inspired to do so from a remarkable constituent who has done so much to promote journalism for women across the globe.

Looking at global stability and security, we have a challenge now with other countries who may view the US, and its allies, as being too weak to intervene and hold the fort. The intervention in Afghanistan was driven by US self-interest following the attacks on 9/11 2001. Current, and future, UK administrations need to use the entrance and exit of the Americans in Afghanistan as a yardstick to decide if our interests are better aligned with other countries who are more reliable.

All of this is linked to another matter filling up my inbox - migrant channel crossings. If you leave a country in chaos, it’s citizens will flee and will try to get to the better place which we are lucky enough to inhabit. The world will vote with its feet if we cannot help those in their own land.

I’ll again be direct; I want the Government to do everything to deter and stop people crossing one of the busiest shipping lanes. However, we need to be realistic and stop making promises we cannot keep. We cannot tow boats back to France. International agreements mean that people can seek asylum on our shores. I know it is frustrating when France is already a safe haven but we cannot just terminate our obligations otherwise we will have bigger problems.

This is a global challenge and other countries have it worse than we do. The UK received about a third of the asylum applications of France and just 1% of all the 4 million refugees in Turkey. In 2020, 36,000 people applied for asylum in the UK; about 10,000 were offered refugee status. Proposed changes will give more support and benefits to those who apply for asylum without entering via boat crossing in the channel. This is aimed at deterring those who come by boat. To speed up the deportation process, those who do not win their immigration tribunal claim will not be able to challenge the decision in court.

Money given to France to prevent channel crossings is often a complaint. The reality shows that this funding has prevented twice as many crossings so far this year compared with the same period in 2020. The people smugglers have got wise and fanned out further up the French coast. This is causing migrants to take even longer and riskier journeys. We are giving the French extra money to double the numbers of police patrolling beaches and to invest in drone technology to spot the boat launches from the air.

The world is unstable. People are on the move. We need to help those, such as the Afghan people, who have helped us or taken our lead. This is best done by trying to lift them out of their continent rather than leaving them to find their own way to our shores. The US position has made this harder. We also need to show compassion to those who seek to enjoy the freedoms we enjoy. Part of that compassion is to stop desperate people drowning at the hands of people traffickers. To do this, we need to make the system stricter in order to disincentive people from drowning in the same sea which many of us wake up to each day on the East Sussex coast.