Changing the way we do business 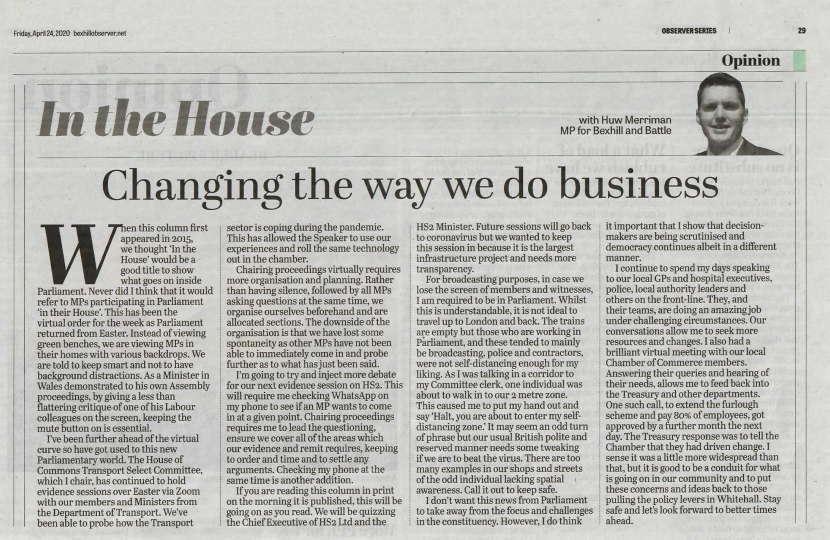 When this column first appeared in 2015, we thought ‘In the House’ would be a good title to show what goes on inside Parliament. Never did I think that it would refer to MPs participating in Parliament ‘in their House’. This has been the virtual order for the week as Parliament returned from Easter. Instead of viewing green benches, we are viewing MPs in their homes with various backdrops. We are told to keep smart and not to have background distractions. As a Minister in Wales demonstrated to his own Assembly proceedings, by giving a less than flattering critique of one of his Labour colleagues on the screen, keeping the mute button on is essential.

I’ve been further ahead of the virtual curve so have got used to this new Parliamentary world. The House of Commons Transport Select Committee, which I chair, has continued to hold evidence sessions over Easter via Zoom with our members and Ministers from the Department of Transport. We’ve been able to probe how the Transport sector is coping during the pandemic. This has allowed the Speaker to use our experiences and roll the same technology out in the chamber.

Chairing proceedings virtually requires more organisation and planning. Rather than having silence, followed by all MPs asking questions at the same time, we organise ourselves beforehand and are allocated sections. The downside of the organisation is that we have lost some spontaneity as other MPs have not been able to immediately come in and probe further as to what has just been said.

I’m going to try and inject more debate for our next evidence session on HS2. This will require me checking WhatsApp on my phone to see if an MP wants to come in at a given point. Chairing proceedings requires me to lead the questioning, ensure we cover all of the areas which our evidence and remit requires, keeping to order and time and to settle any arguments. Checking my phone at the same time is another addition.

If you are reading this column in print on the morning it is published, this will be going on as you read. We will be quizzing the Chief Executive of HS2 Ltd and the HS2 Minister. Future sessions will go back to coronavirus but we wanted to keep this session in because it is the largest infrastructure project and needs more transparency.

For broadcasting purposes, in case we lose the screen of members and witnesses, I am required to be in Parliament. Whilst this is understandable, it is not ideal to travel up to London and back. The trains are empty but those who are working in Parliament, and these tended to mainly be broadcasting, police and contractors, were not self-distancing enough for my liking. As I was talking in a corridor to my Committee clerk, one individual was about to walk in to our 2 metre zone. This caused me to put my hand out and say ‘Halt, you are about to enter my self-distancing zone.’ It may seem an odd turn of phrase but our usual British polite and reserved manner needs some tweaking if we are to beat the virus. There are too many examples in our shops and streets of the odd individual lacking spatial awareness. Call it out to keep safe.

I don’t want this news from Parliament to take away from the focus and challenges in the constituency. However, I do think it important that I show that decision-makers are being scrutinised and democracy continues albeit in a different manner.

I continue to spend my days speaking to our local GPs and hospital executives, police, local authority leaders and others on the front-line. They, and their teams, are doing an amazing job under challenging circumstances. Our conversations allow me to seek more resources and changes. I also had a brilliant virtual meeting with our local Chamber of Commerce members. Answering their queries and hearing of their needs, allows me to feed back into the Treasury and other departments. One such call, to extend the furlough scheme and pay 80% of employees, got approved by a further month the next day. The Treasury response was to tell the Chamber that they had driven change. I sense it was a little more widespread than that, but it is good to be a conduit for what is going on in our community and to put these concerns and ideas back to those pulling the policy levers in Whitehall. Stay safe and let’s look forward to better times ahead.

Watch: Huw in the Liaison Committee

As Chairman of the Transport Select Committee I am also part of the Liaison Committee, which considers the overall work of select committees and scrutinises the Government. The Prime Minister is asked to attend about 3 times a year.