A week of UK and world politics 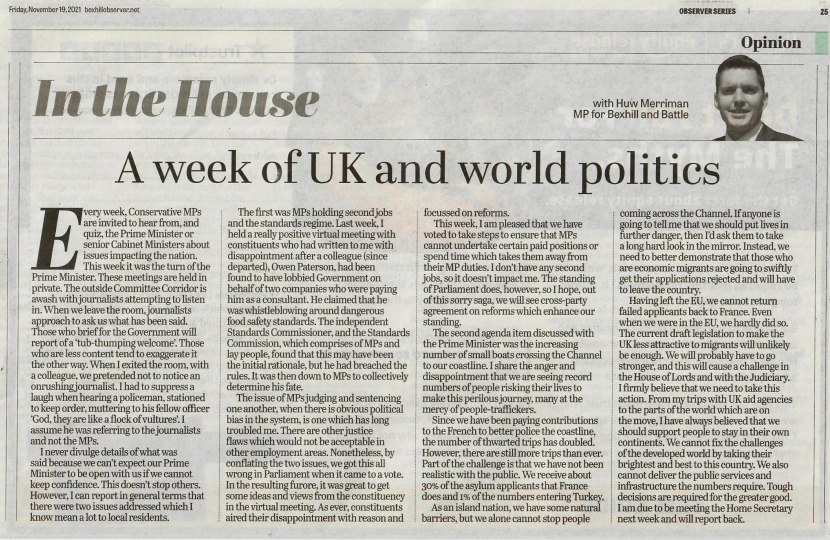 Every week, Conservative MPs are invited to hear from, and quiz, the Prime Minister or senior Cabinet Ministers about issues impacting the nation. This week it was the turn of the Prime Minister. These meetings are held in private. The outside Committee Corridor is awash with journalists attempting to listen in. When we leave the room, journalists approach to ask us what has been said. Those who brief for the Government will report of a ‘tub-thumping welcome’. Those who are less content tend to exaggerate it the other way. When I exited the room, with a colleague, we pretended not to notice an onrushing journalist. I had to supress a laugh when hearing a policeman, stationed to keep order, muttering to his fellow officer ‘God, they are like a flock of vultures’. I assume he was referring to the journalists and not the MPs.

I never divulge details of what was said because we can’t expect our Prime Minister to be open with us if we cannot keep confidence. This doesn’t stop others. However, I can report in general terms that there were two issues addressed which I know mean a lot to local residents.

The first was MPs holding second jobs and the standards regime. Last week, I held a really positive virtual meeting with constituents who had written to me with disappointment after a colleague (since departed), Owen Paterson, had been found to have lobbied Government on behalf of two companies who were paying him as a consultant. He claimed that he was whistleblowing around dangerous food safety standards. The independent Standards Commissioner, and the Standards Commission, which comprises of MPs and lay people, found that this may have been the initial rationale, but he had breached the rules. It was then down to MPs to collectively determine his fate.

The issue of MPs judging and sentencing one another, when there is obvious political bias in the system, is one which has long troubled me. There are other justice flaws which would not be acceptable in other employment areas. Nonetheless, by conflating the two issues, we got this all wrong in Parliament when it came to a vote. In the resulting furore, it was great to get some ideas and views from the constituency in the virtual meeting. As ever, constituents aired their disappointment with reason and focussed on reforms.

This week, I am pleased that we have voted to take steps to ensure that MPs cannot undertake certain paid positions or spend time which takes them away from their MP duties. I don’t have any second jobs, so it doesn’t impact me. The standing of Parliament does, however, so I hope, out of this sorry saga, we will see cross-party agreement on reforms which enhance our standing.

The second agenda item discussed with the Prime Minister was the increasing number of small boats crossing the Channel to our coastline. I share the anger and disappointment that we are seeing record numbers of people risking their lives to make this perilous journey, many at the mercy of people-traffickers.

Since we have been paying contributions to the French to better police the coastline, the number of thwarted trips has doubled. However, there are still more trips than ever. Part of the challenge is that we have not been realistic with the public. We receive about 30% of the asylum applicants that France does and 1% of the numbers entering Turkey.

As an island nation, we have some natural barriers, but we alone cannot stop people coming across the Channel. If anyone is going to tell me that we should put lives in further danger, then I’d ask them to take a long hard look in the mirror. Instead, we need to better demonstrate that those who are economic migrants are going to swiftly get their applications rejected and will have to leave the country.

Having left the EU, we cannot return failed applicants back to France. Even when we were in the EU, we hardly did so. The current draft legislation to make the UK less attractive to migrants will unlikely be enough. We will probably have to go stronger, and this will cause a challenge in the House of Lords and with the Judiciary. I firmly believe that we need to take this action. From my trips with UK aid agencies to the parts of the world which are on the move, I have always believed that we should support people to stay in their own continents. We cannot fix the challenges of the developed world by taking their brightest and best to this country. We also cannot deliver the public services and infrastructure the numbers require. Tough decisions are required for the greater good. I am due to be meeting the Home Secretary next week and will report back.