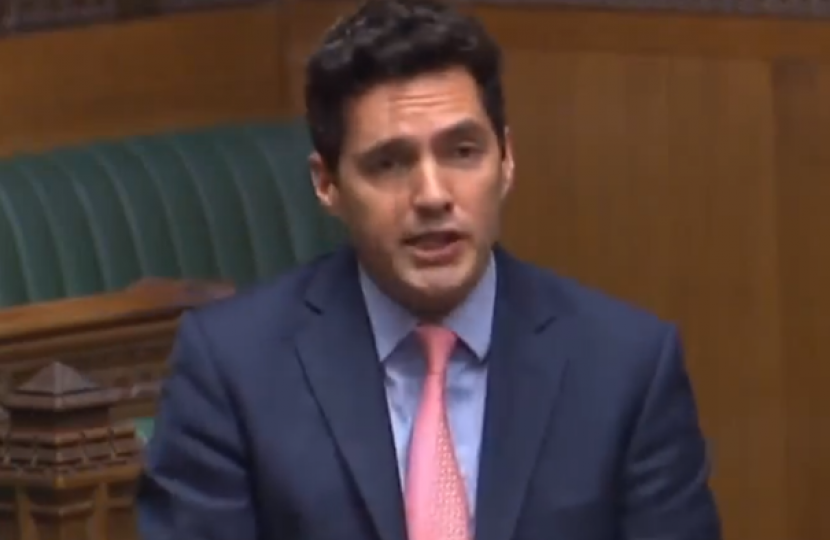 After the Queen's Speech a number of debates take place in the House of Commons to discuss the legislative programme that is set out in the speech. I took part in one of these debates on the Environment Bill and more widely the Climate Emergency.

Unfortunately, due to some Urgent Questions that had been discussed earlier in the day there was only time for MPs to make short interventions - Parliament at its most maddening; a debate about Climate Change, cut short. A topic of such importance should be given the time that it deserves.

In the time I had I outlined what great work has been done by successive governments to address climate change and how economic expansion, which will boost our innovators and entrepreneurs, is the way in which climate issues will be fixed.

"The next time a young person asks me how seriously Parliament takes climate change I will struggle to answer, given that this morning we ate into our time with a discussion on pornography, followed by a debate about whether we ​should have a debate on Saturday. When Parliament starts providing a proportion of its time that is commensurate with the importance of the issues out there in the country at large, those people will have more respect and regard for us and what we do.

It is a great shame that we have not had more time to discuss climate change, because so much progress was made by all three mainstream political parties when they were in government. Emissions have reduced by 44% since the 1990s, for which we credit the Labour Government. Since 2010, the proportion of renewables in our energy supply has gone from 4% to almost 40%, and we can credit the Liberal Democrats and the coalition Government for that, as well as this Conservative Government. We are making great strides, and we have the best record on emissions of all G20 countries. When we speak to young people it is important to reassure them that we are on a good road, but that we need to do more and must not be complacent. It is also important to debate this issue with the transport sector, because 33% of our carbon dioxide emissions come from that.

There are reasons to be positive. Through the Transport Committee I had the pleasure of visiting Porterbrook, and its amazing engineer, Helen Simpson, who has a real passion for the environment and for getting more women into engineering. Together with the Birmingham Centre for Railway Research and Education at the University of Birmingham, she has come up with the first retrofitted hydrogen train. That is a green train; that is the future for this country. Indeed, it is not just about this country, because we can sell our industry to other countries, making them greener in our one planet, and making our economy better in this country. I fully support that.

I am also excited about the airline industry. I am a supporter of Heathrow expansion, but the future of air travel should involve solar or battery power, and we should look to a time when at least short-haul flights can be green. I do not believe that we have to slow our economy down; I believe that if we grow the economy and unleash our great innovators, entrepreneurs and engineers, we will not only fix climate issues in this country but be a groundbreaker for the rest of the world."