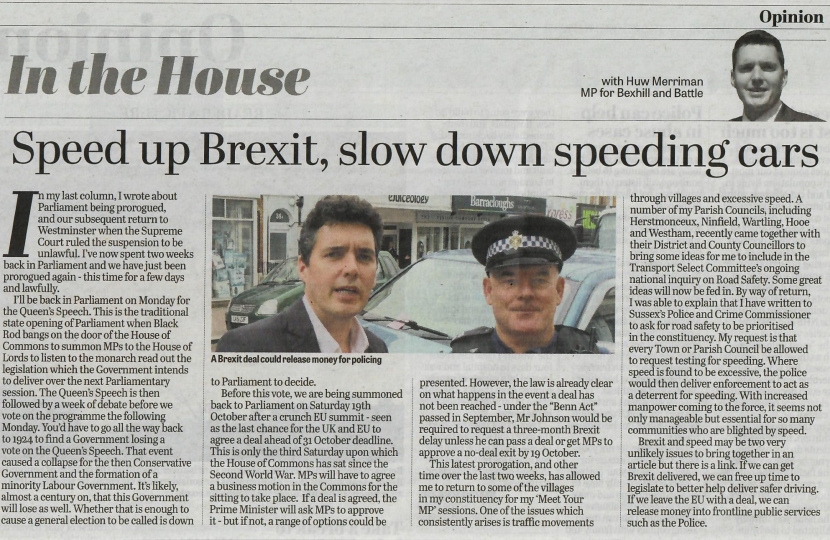 In my last column, I wrote about Parliament being prorogued, and our subsequent return to Westminster when the Supreme Court ruled the suspension to be unlawful. As a result, I’ve spent two weeks back in Parliament and we have just been prorogued again. This time it’s just for a few days and, as at the time of writing, lawfully so.

I’ll be back in Parliament on Monday for the Queen’s Speech. This is the traditional state opening of Parliament when Black Rod, the monarch’s representative in the House of Lords, bangs on the door of the Commons chamber to summon MPs to the Lords chamber to listen to the monarch read out the legislation which the Government intends to deliver over the year to come. Dating back from Charles I’s failed attempt to arrest dissident MPs in the chamber as a precursor to the Civil War, the monarch is not a ‘commoner’ and is not allowed inside the House of Commons. This is nothing personal to the present Queen but symbolises the independence of elected MPs from the Crown.

The Queen’s Speech is then followed by a week of debate before we vote on the Government’s intended programme the following Monday. You’d have to go all the way back to 1924 to find a Government losing a vote on the Queen’s Speech. That event caused a collapse in the then Conservative Government and the formation of a minority Labour Government. It’s likely, almost a century on, that this Government will lose as well. Whether that is enough to cause a general election to be called is down to Parliament to decide.

Before this vote, it appears that we are being summoned back to Parliament on Saturday 19th October after a crunch EU summit - viewed as the final opportunity for the UK and EU to agree a deadline ahead of the Brexit deadline. This is only the fourth Saturday upon which the House of Commons has sat since the end of the World War II. The previous occasion was 37 years ago during the Falklands war. Whether this is really needed is open to debate. The law is already clear on what happens next in the event a deal has not been reached. If we do get a deal, we will have any day during the following week to vote it through in principle and will need more than one day to turn it into law. Regardless, I will be there. My hope remains that we will get a deal which allows us to leave the EU on agreed terms.

The latest prorogation, and other time over the last two weeks, has allowed me to return to some of the villages for my ‘Meet Your MP’ sessions. One of the issues which consistently arises is traffic movements through villages and excessive speed. Four of my Parish Councils, Herstmonceux, Ninfield., Wartling and Hooe, came together, via their District and County Councillors, to bring some ideas for me to include in the Transport Select Committee’s ongoing national inquiry on Road Safety. Some great ideas will now be fed in. By way of return, I was able to explain that I have written to Sussex’s Police and Crime Commissioner to ask for road safety to be prioritised in the constituency. My request is that every Town or Parish Council be allowed to request testing for speeding. Where speed is found to be excessive, the police would then deliver enforcement to act as a deterrent for speeding. With increased manpower coming to the force, it seems not only manageable but essential for so many communities who are blighted by speed.

Brexit and speed may be two very unlikely bedfellows to bring together in an article. Let’s hope we can finally speed up Brexit and slow down some very dangerous driving in our lovely part of East Sussex.