Roll up your sleeves and make change 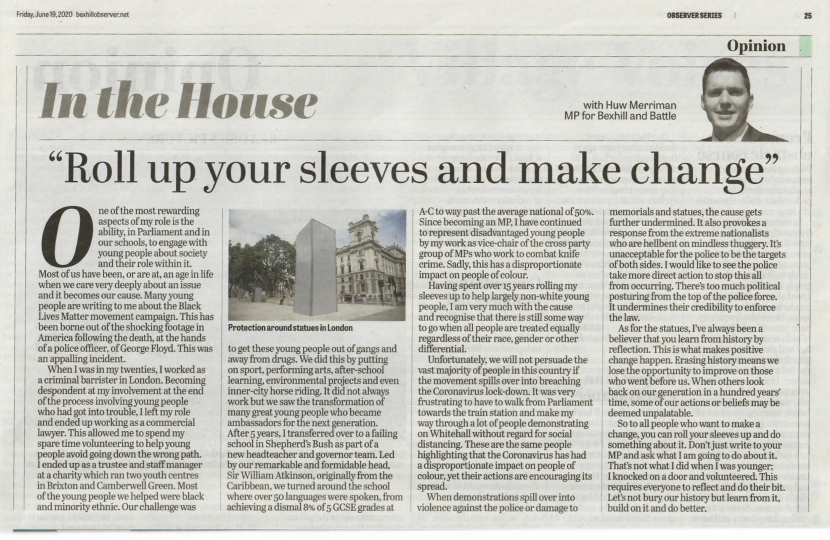 One of the most rewarding aspects of my role is the ability, in Parliament and in our schools, to engage with young people about society and their role within it. Most of us have been, or are at, an age in life when we care very deeply about an issue and it becomes our cause. Many young people are writing to me about the Black Lives Matter movement campaign. This has been borne out of the shocking footage in America following the death, at the hands of a police officer, of George Floyd. This was an appalling incident.

When I was in my twenties, I worked as a criminal barrister in London. Becoming despondent at my involvement at the end of the process involving young people who had got into trouble, I left my role and ended up working as a commercial lawyer. This allowed me to spend my spare time volunteering to help young people avoid going down the wrong path. I ended up as a trustee and staff manager at a charity which ran two youth centres in Brixton and Camberwell Green. Most of the young people we helped were black and minority ethnic. Our challenge was to get these young people out of gangs and away from drugs. We did this by putting on sport, performing arts, after-school learning, environmental projects and even inner-city horse riding. It did not always work but we saw the transformation of many great young people who became ambassadors for the next generation. After 5 years, I transferred over to a failing school in Shepherd’s Bush as part of a new headteacher and governor team. Led by our remarkable and formidable head, Sir William Atkinson, originally from the Caribbean, we turned around the school where over 50 languages were spoken, from achieving a dismal 8% of 5 GCSE grades at A-C to way past the average national of 50%. Since becoming an MP, I have continued to represent disadvantaged young people by my work as vice-chair of the cross party group of MPs who work to combat knife crime. Sadly, this has a disproportionate impact on people of colour.

Having spent over 15 years rolling my sleeves up to help largely non-white young people, I am very much with the cause and recognise that there is still some way to go when all people are treated equally regardless of their race, gender or other differential.

Unfortunately, we will not persuade the vast majority of people in this country if the movement spills over into breaching the Coronavirus lock-down. It was very frustrating to have to walk from Parliament towards the train station and make my way through a lot of people demonstrating on Whitehall without regard for social distancing. These are the same people highlighting that the Coronavirus has had a disproportionate impact on people of colour, yet their actions are encouraging its spread.

When demonstrations spill over into violence against the police or damage to memorials and statues, the cause gets further undermined. It also provokes a response from the extreme nationalists who are hellbent on mindless thuggery. It’s unacceptable for the police to be the targets of both sides. I would like to see the police take more direct action to stop this all from occurring. There’s too much political posturing from the top of the police force. It undermines their credibility to enforce the law.

As for the statues, I’ve always been a believer that you learn from history by reflection. This is what makes positive change happen. Erasing history means we lose the opportunity to improve on those who went before us. When others look back on our generation in a hundred years’ time, some of our actions or beliefs may be deemed unpalatable.

So to all people who want to make a change, you can roll your sleeves up and do something about it. Don’t just write to your MP and ask what I am going to do about it. That’s not what I did when I was younger; I knocked on a door and volunteered. This requires everyone to reflect and do their bit. Let’s not bury our history but learn from it, build on it and do better.