Putting Bexhill on the testing grid 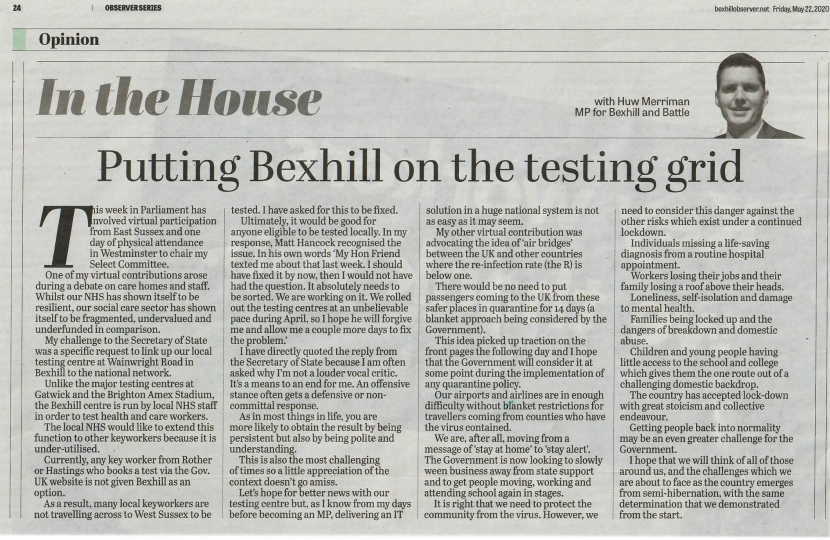 One of my virtual contributions arose during a debate on care homes and staff. Whilst our NHS has shown itself to be resilient, our social care sector has shown itself to be fragmented, undervalued and underfunded in comparison. My challenge to the Secretary of State was a specific request to link up our local testing centre at Wainwright Road in Bexhill to the national network. Unlike the major testing centres at Gatwick and the Brighton Amex Stadium, the Bexhill centre is run by local NHS staff in order to test health and care workers. The local NHS would like to extend this function to other keyworkers because it is under-utilised. Currently, any key worker from Rother or Hastings who books a test via the Gov.UK website is not given Bexhill as an option. As a result, many local keyworkers are not travelling across to West Sussex to be tested. I have asked for this to be fixed. Ultimately, it would be good for anyone eligible to be tested locally. In my response, Matt Hancock recognised the issue. In his own words ‘My Hon Friend texted me about that last week. I should have fixed it by now, then I would not have had the question. It absolutely needs to be sorted. We are working on it. We rolled out the testing centres at an unbelievable pace during April, so I hope he will forgive me and allow me a couple more days to fix the problem.’

I have directly quoted the reply from the Secretary of State because I am often asked why I’m not a louder vocal critic. It’s a means to an end for me. An offensive stance often gets a defensive or non-committal response. As in most things in life, you are more likely to obtain the result by being persistent but also by being polite and understanding. This is also the most challenging of times so a little appreciation of the context doesn’t go amiss. Let’s hope for better news with our testing centre but, as I know from my days before becoming an MP, delivering an IT solution in a huge national system is not as easy as it may seem.

My other virtual contribution was advocating the idea of ‘air bridges’ between the UK and other countries where the re-infection rate (the R) is below one. There would be no need to put passengers coming to the UK from these safer places in quarantine for 14 days (a blanket approach being considered by the Government). This idea picked up traction on the front pages the following day and I hope that the Government will consider it at some point during the implementation of any quarantine policy. Our airports and airlines are in enough difficulty without blanket restrictions for travellers coming from counties who have the virus contained.

We are, after all, moving from a message of ‘stay at home’ to ‘stay alert’. The Government is now looking to slowly ween business away from state support and to get people moving, working and attending school again in stages.

It is right that we need to protect the community from the virus. However, we need to consider this danger against the other risks which exist under a continued lockdown. Individuals missing a life-saving diagnosis from a routine hospital appointment. Workers losing their jobs and their family losing a roof above their heads. Loneliness, self-isolation and damage to mental health. Families being locked up and the dangers of breakdown and domestic abuse. Children and young people having little access to the school and college which gives them the one route out of a challenging domestic backdrop.

The country has accepted lock-down with great stoicism and collective endeavour. Getting people back into normality may be an even greater challenge for the Government. I hope that we will think of all of those around us, and the challenges which we are about to face as the country emerges from semi-hibernation, with the same determination that we demonstrated from the start.