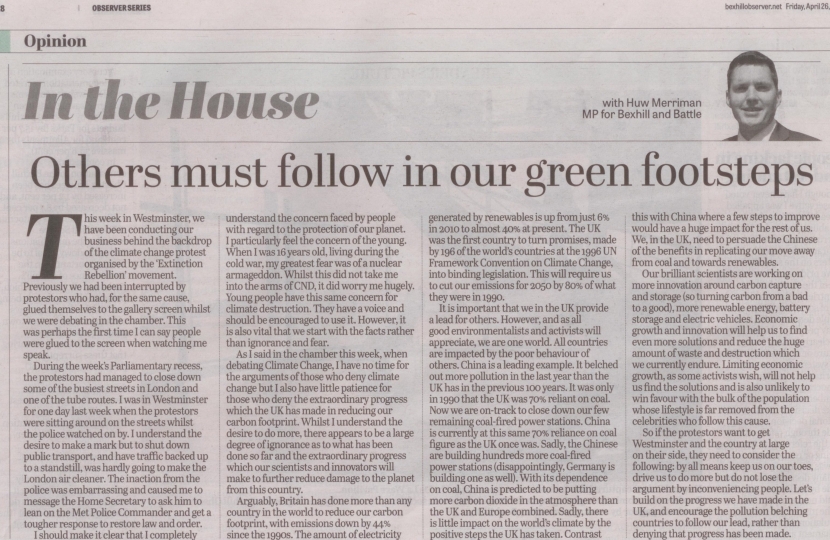 This week in Westminster, we have been conducting our business behind the backdrop of the climate change protest organised by the ‘Extinction Rebellion’ movement. Previously we had been interrupted by protestors who had, for the same cause, glued themselves to the gallery screen whilst we were debating in the chamber. This was perhaps the first time I can say people were glued to the screen when watching me speak.

During the week’s Parliamentary recess, the protestors had managed to close down some of the busiest streets in London and one of the tube routes. I was in Westminster for one day last week when the protestors were sitting around on the streets whilst the police watched on by. I understand the desire to make a mark but to shut down public transport, and have traffic backed up to a standstill, was hardly going to make the London air cleaner. The inaction from the police was embarrassing and caused me to message the Home Secretary to ask him to lean on the Met Police Commander and get a tougher response to restore law and order.

I should make it clear that I completely understand the concern faced by people with regard to the protection of our planet. I particularly feel the concern of the young. When I was 16 years old, living during the cold war, my greatest fear was of a nuclear armageddon. Whilst this did not take me into the arms of CND, it did worry me hugely. Young people have this same concern for climate destruction. They have a voice and should be encouraged to use it. However, it is also vital that we start with the facts rather than ignorance and fear.

As I said in the chamber this week, when debating Climate Change, I have no time for the arguments of those who deny climate change but I also have little patience for those who deny the extraordinary progress which the UK has made in reducing our carbon footprint. Whilst I understand the desire to do more, there appears to be a large degree of ignorance as to what has been done so far and the extraordinary progress which our scientists and innovators will make to further reduce damage to the planet from this country.

Arguably, Britain has done more than any country in the world to reduce our carbon footprint, with emissions down by 44% since the 1990s. The amount of electricity generated by renewables is up from just 6% in 2010 to almost 40% at present. The UK was the first country to turn promises, made by 196 of the world’s countries at the 1996 UN Framework Convention on Climate Change, into binding legislation. This will require us to cut our emissions for 2050 by 80% of what they were in 1990.

It is important that we in the UK provide a lead for others. However, and as all good environmentalists and activists will appreciate, we are one world. All countries are impacted by the poor behaviour of others. China is a leading example. It belched out more pollution in the last year than the UK has in the previous 100 years. It was only in 1990 that the UK was 70% reliant on coal. Now we are on-track to close down our few remaining coal-fired power stations. China is currently at this same 70% reliance on coal figure as the UK once was. Sadly, the Chinese are building hundreds more coal-fired power stations (disappointingly, Germany is building out as well). With its dependence on coal, China is predicted to be putting more carbon dioxide in the atmosphere than the UK and Europe combined. Sadly, there is little impact on the world’s climate by the positive steps the UK has taken. Contrast this with China where a few steps to improve would have a huge impact for the rest of us. We, in the UK, need to persuade the Chinese of the benefits in replicating our move away from coal and towards renewables.

Our brilliant scientists are working on more innovation around carbon capture and storage (so turning carbon from a bad to a good), more renewable energy, battery storage and electric vehicles. Economic growth and innovation will help us to find even more solutions and reduce the huge amount of waste and destruction which we currently endure. Limiting economic growth, as some activists wish, will not help us find the solutions and is also unlikely to win favour with the bulk of the population whose lifestyle is far removed from the celebrities who follow this cause.

So if the protestors want to get Westminster and the country at large on their side, they need to consider the following: by all means keep us on our toes, drive us to do more but do not lose the argument by inconveniencing people. Let’s build on the progress we have made in the UK, and encourage the pollution belching countries to follow our lead, rather than denying that progress has been made.