Logistics industry needs to get into gear 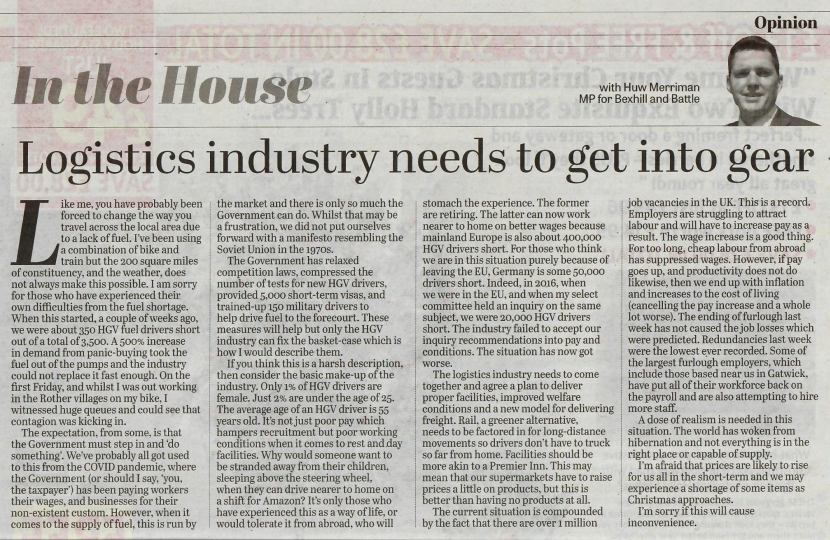 Like me, you have probably been forced to change the way you travel across the local area due to a lack of fuel. I’ve been using a combination of bike and train but the 200 square miles of constituency, and the weather, does not always make this possible. I am sorry for those who have experienced their own difficulties from the fuel shortage. When this started, a couple of weeks ago, we were about 350 HGV fuel drivers short out of a total of 3,500. A 500% increase in demand from panic-buying took the fuel out of the pumps and the industry could not replace it fast enough. On the first Friday, and whilst I was out working in the Rother villages on my bike, I witnessed huge queues and could see that contagion was kicking in.

The expectation, from some, is that the Government must step in and ‘do something’. We’ve probably all got used to this from the COVID pandemic, where the Government (or should I say, ‘you, the taxpayer’) has been paying workers their wages, and businesses for their non-existent custom. However, when it comes to the supply of fuel, this is run by the market and there is only so much the Government can do to. Whilst that may be a frustration, we did not put ourselves forward with a manifesto resembling the Soviet Union in the 1970s.

The Government has relaxed competition laws, compressed the number of tests for new HGV drivers, provided 5,000 short-term visas, and trained-up 150 military drivers to help drive fuel to the forecourt. These measures will help but only the HGV industry can fix the basket-case which is how I would describe them.

If you think this is a harsh description, then consider the basic make-up of the industry. Only 1% of HGV drivers are female. Just 2% are under the age of 25. The average age of an HGV driver is 55 years old. It’s not just poor pay which hampers recruitment but poor working conditions when it comes to rest and day facilities. Why would someone want to be stranded away from their children, sleeping above the steering wheel, when they can drive nearer to home on a shift for Amazon? It’s only those who have experienced this as a way of life, or would tolerate it from abroad, who will stomach the experience. The former are retiring. The latter can now work nearer to home on better wages because mainland Europe is also about 400,000 HGV drivers short. For those who think we are in this situation purely because of leaving the EU, Germany is some 50,000 drivers short. Indeed, in 2016, when we were in the EU, and when my select committee held an inquiry on the same subject, we were 20,000 HGV drivers short. The industry failed to accept our inquiry recommendations into pay and conditions. The situation has now got worse.

The logistics industry needs to come together and agree a plan to deliver proper facilities, improved welfare conditions and a new model for delivering freight. Rail, a greener alternative, needs to be factored in for long-distance movements so drivers don’t have to truck so far from home. Facilities should be more akin to a Premier Inn. This may mean that our supermarkets have to raise prices a little on products, but this is better than having no products at all.

The current situation is compounded by the fact that there are over 1 million job vacancies in the UK. This is a record. Employers are struggling to attract labour and will have to increase pay as a result. The wage increase is a good thing. For too long, cheap labour from abroad has supressed wages. However, if pay goes up, and productivity does not do likewise, then we end up with inflation and increases to the cost of living (cancelling the pay increase and a whole lot worse). The ending of furlough last week has not caused the job losses which were predicted. Redundancies last week were the lowest ever recorded. Some of the largest furlough employers, which include those based near us in Gatwick, have put all of their workforce back on the payroll and are also attempting to hire more staff.

A dose of realism is needed in this situation. The world has woken from hibernation and not everything is in the right place or capable of supply. I’m afraid that prices are likely to rise for us all in the short-term and we may experience a shortage of some items as Christmas approaches. I’m sorry if this will cause inconvenience.