Leaving the EU: Devil in the Detail 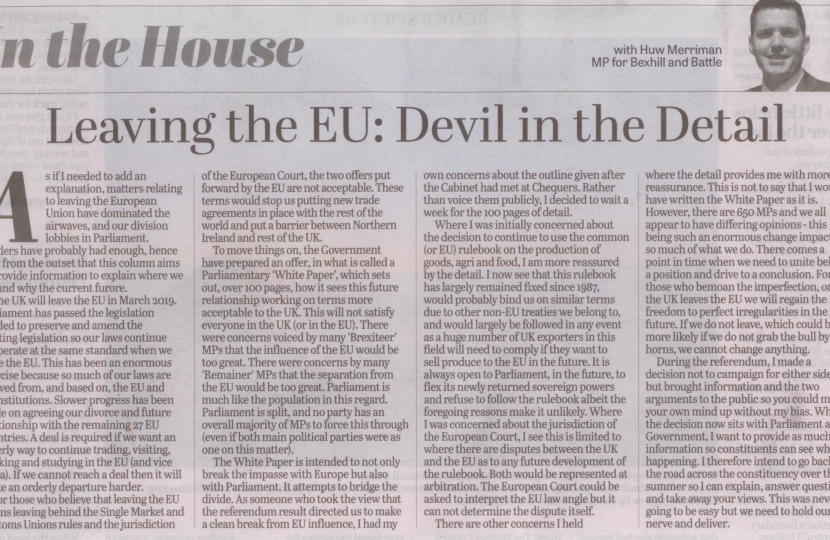 As if I needed to add an explanation, matters relating to leaving the European Union have dominated the airwaves, and our division lobbies in Parliament. Readers have probably had enough, hence I say from the outset that this column aims to provide information to explain where we are and why the current furore.

The UK will leave the EU in March 2019. Parliament has passed the legislation needed to preserve and amend the existing legislation so our laws continue to operate at the same standard when we leave the EU. This has been an enormous exercise because so much of our laws are derived from, and based on, the EU and its institutions. Slower progress has been made on agreeing our divorce and future relationship with the remaining 27 EU countries. A deal is required if we want an orderly way to continue trading, visiting, working and studying in the EU (and vice versa). If we cannot reach a deal then it will make an orderly departure harder.

For those who believe that leaving the EU means leaving behind the Single Market and Customs Unions rules and the jurisdiction of the European Court, the two offers put forward by the EU are not acceptable. These terms would stop us putting new trade agreements in place with the rest of the world and put a barrier between Northern Ireland and rest of the UK.

To move things on, the Government have prepared an offer, in what is called a Parliamentary ‘White Paper’, which sets out, over 100 pages, how it sees this future relationship working on terms more acceptable to the UK. This will not satisfy everyone in the UK (or in the EU). There were concerns voiced by many ‘Brexiteer’ MPs that the influence of the EU would be too great. There were concerns by many ‘Remainer’ MPs that the separation from the EU would be too great. Parliament is much like the population in this regard. Parliament is split, and no party has an overall majority of MPs to force this through (even if both main political parties were as one on this matter).

The White Paper is intended to not only break the impasse with Europe but also with Parliament. It attempts to bridge the divide. As someone who took the view that the referendum result directed us to make a clean break from EU influence, I had my own concerns about the outline given after the Cabinet had met at Chequers. Rather than voice them publicly, I decided to wait a week for the 100 pages of detail.

Where I was initially concerned about the decision to continue to use the common (or EU) rulebook on the production of goods, agri and food, I am more reassured by the detail. I now see that this rulebook has largely remained fixed since 1987, would probably bind us on similar terms due to other non-EU treaties we belong to, and would largely be followed in any event as a huge number of UK exporters in this field will need to comply if they want to sell produce to the EU in the future. It is always open to Parliament, in the future, to flex its newly returned sovereign powers and refuse to follow the rulebook albeit the foregoing reasons make it unlikely.

Where I was concerned about the jurisdiction of the European Court, I see this is limited to where there are disputes between the UK and the EU as to any future development of the rulebook. Both would be represented at arbitration. The European Court could be asked to interpret the EU law angle but it can not determine the dispute itself.

There are other concerns I held where the detail provides me with more reassurance. This is not to say that I would have written the White Paper as it is. However, there are 650 MPs and we all appear to have differing opinions - this being such an enormous change impacting so much of what we do. There comes a point in time when we need to unite behind a position and drive to a conclusion. For those who bemoan the imperfection, once the UK leaves the EU we will regain the freedom to perfect irregularities in the future. If we do not leave, which could be more likely if we do not grab the bull by the horns, we cannot change anything.

During the referendum, I made a decision not to campaign for either side but brought information and the two arguments to the public so you could make your own mind up without my bias. Whilst the decision now sits with Parliament and Government, I want to provide as much information so constituents can see what is happening. I therefore intend to go back on the road across the constituency over the summer so I can explain, answer questions and take away your views. This was never going to be easy but we need to hold our nerve and deliver.