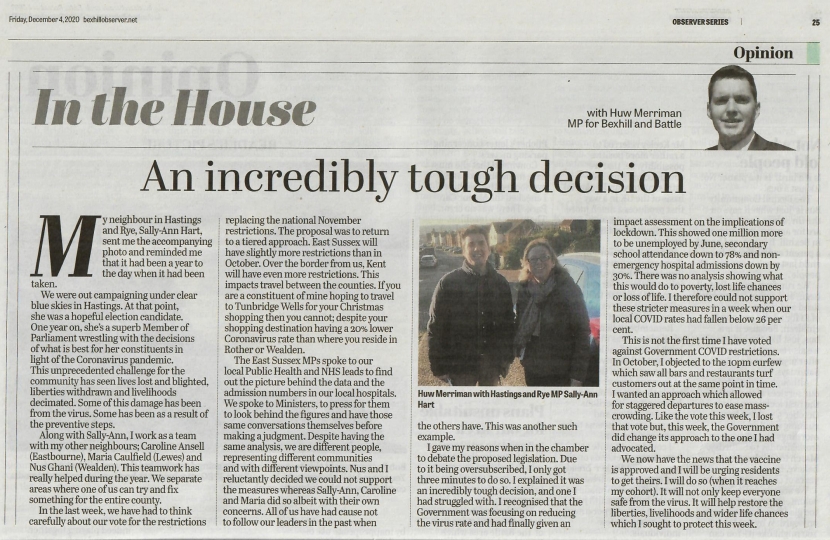 My neighbour in Hastings and Rye, Sally-Ann Hart, sent me the accompanying photo and reminded me that it had been a year to the day when it had been taken. We were out campaigning under clear blue skies in Hastings. At that point, she was a hopeful election candidate. One year on, she’s a superb Member of Parliament wrestling with the decisions of what is best for her constituents in light of the Coronavirus pandemic. This unprecedented challenge for the community has seen lives lost and blighted, liberties withdrawn and livelihoods decimated. Some of this damage has been from the virus. Some has been as a result of the preventive steps.

Along with Sally-Ann, I work as a team with my other neighbours; Caroline Ansell (Eastbourne), Maria Caulfield (Lewes) and Nus Ghani (Wealden). This teamwork has really helped during the year. We separate areas where one of us can try and fix something for the entire county.

In the last week, we have had to think carefully about our vote for the restrictions replacing the national November restrictions. The proposal was to return to a tiered approach. East Sussex will have slightly more restrictions than in October. Over the border from us, Kent will have even more restrictions. This impacts travel between the counties. If you are a constituent of mine hoping to travel to Tunbridge Wells for your Christmas shopping then you cannot; despite your shopping destination having a 20% lower Coronavirus rate than where you reside in Rother or Wealden.

The East Sussex MPs spoke to our local Public Health and NHS leads to find out the picture behind the data and the admission numbers in our local hospitals. We spoke to Ministers, to press for them to look behind the figures and have those same conversations themselves before making a judgment. Despite having the same analysis, we are different people, representing different communities and with different viewpoints. Nus and I reluctantly decided we could not support the measures whereas Sally-Ann, Caroline and Maria did so albeit with their own concerns. All of us have had cause not to follow our leaders in the past when the others have. This was another such example.

I gave my reasons when in the chamber to debate the proposed legislation. Due to it being oversubscribed, I only got three minutes to do so. I explained it was an incredibly tough decision, and one I had struggled with. I recognised that the Government was focusing on reducing the virus rate and had finally given an impact assessment on the implications of lockdown. This showed one million more to be unemployed by June, secondary school attendance down to 78% and non-emergency hospital admissions down by 30%. There was no analysis showing what this would do to poverty, lost life chances or loss of life. I therefore could not support these stricter measures in a week when our local COVID rates had fallen below 26%.

This is not the first time I have voted against Government COVID restrictions. In October, I objected to the 10pm curfew which saw all bars and restaurants turf customers out at the same point in time. I wanted an approach which allowed for staggered departures to ease mass-crowding. Like the vote this week, I lost that vote but, this week, the Government did change its approach to the one I had advocated.

We now have the news that the vaccine is approved and I will be urging residents to get theirs. I will do so (when it reaches my cohort). It will not only keep everyone safe from the virus. It will help restore the liberties, livelihoods and wider life chances which I sought to protect this week.